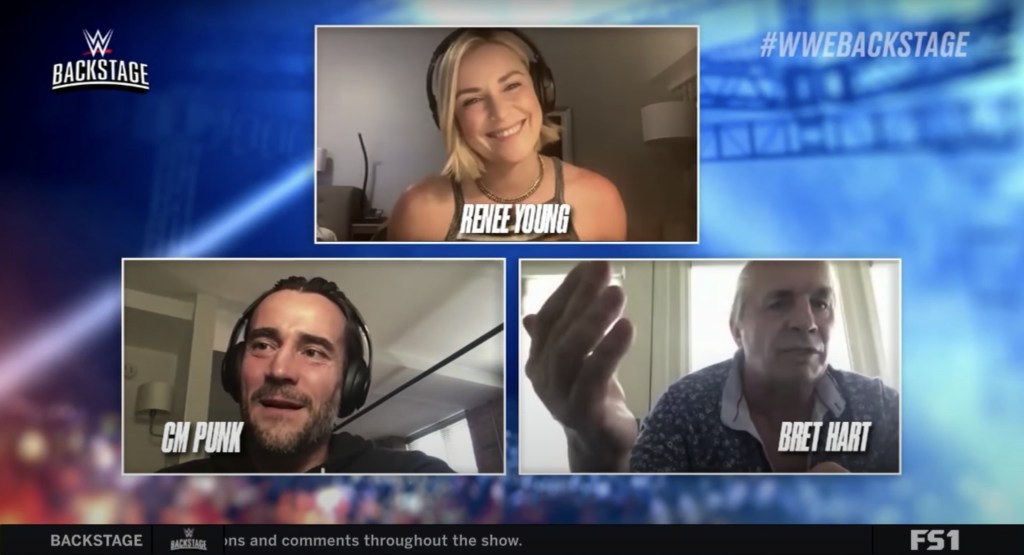 The Best In The World and the Best There Is, The Best There Was And The Best There Ever Will Be appeared on WWE Backstage last night to discuss the epic clash between Randy Orton and Edge. And, as to expected with these two personalities, they had opinions. First up, Hart said he did watch the main event of WWE Backlash, and actually quite enjoyed it:

“I thought it was a great match. I think it’s really almost impossible to name one match as the greatest match of all time, as wrestling evolves and changes. You watch some of these old matches with Buddy Rogers and Pat O’Connor and stuff, and go, ‘That was the greatest match’ back in 1962 or something. There’s certain matches you aways remember for the hype or the way they come out, and I think it’s impossible to say one match is the best. I think the one missing ingredient that would sort of not allow me to say it was the greatest match of all time is the fact that there’s no audience. You gotta have the third ingredient. You&nbsp;got two great wrestlers, you gotta have a wrestling audience. Unfortunately, that’s an unfortunate limitation. There’s nothing they can do about it. But in saying that, I would say they certainly had a great match and I thought it was very realistic, very intense. It [reminded] me of a tennis match.”

Later, Hart divulged that the Rated R Superstar reached out to him for advice beforehand:

“[Edge] was a little bit uncomfortable with the idea of declaring [it] the greatest match of all time before you walk out. A tough pair of shoes for anybody to fill. Sometimes, before I went out and wrestled, I remember thinking about my match and envisioning it, and I always thought of myself sitting in the front row watching myself. I’m gonna try to entertain myself. This match is for me. All the things that I’m gonna do are for the little fan me sitting in the front row watching it, and if I can get his attention, make him go, ‘Hey, this is a great match’ — it’s kind of all in your head, but I always thought that was the best advice… He did text me and tell me that he put himself in the front row and then played the match and he was quite happy with it. I was always a big fan of a great wrestling match and the psychology, watching someone really work a hold and try to tell a story with working different body parts, telling a story that leads to the whole story. I thought they did a great job of that in the match.”

Later in the episode, Punk had the opportunity to voice his own thoughts on the match and its branding, and true to form, he didn’t hold back:

“I think if you’re Randy and Edge, you just ignore that. You can’t live up to that. It’s too subjective of a label: ‘The greatest match of all time.’ What’s the greatest single of all time, music-wise? What’s the greatest band of all time? What’s the greatest car of all time? It’s too subjective, everybody’s going to have a different opinion, but I think that’s what makes wrestling great: You can talk about all these different wrestlers from all these different regions from all over the world who wrestle a different style, and sometimes in the ring you get magic. I think they had a great match. Was it the greatest match of all time? I’ve seen better Randy Orton matches. I’ve seen better Edge matches. But, like Booker [T] said, to put that on the marquee to get people to watch, I kinda feel like it was a lot of unnecessary pressure especially on Edge, coming back after almost a decade of not wrestling. They did a great job of compartmentalizing it and almost ignoring it and just going out there and delivering.”

There you have it: If Edge/Orton managed to placate two of the best talents and two of the harshest critics in professional wrestling, maybe it actually was the Greatest Wrestling Match Ever.