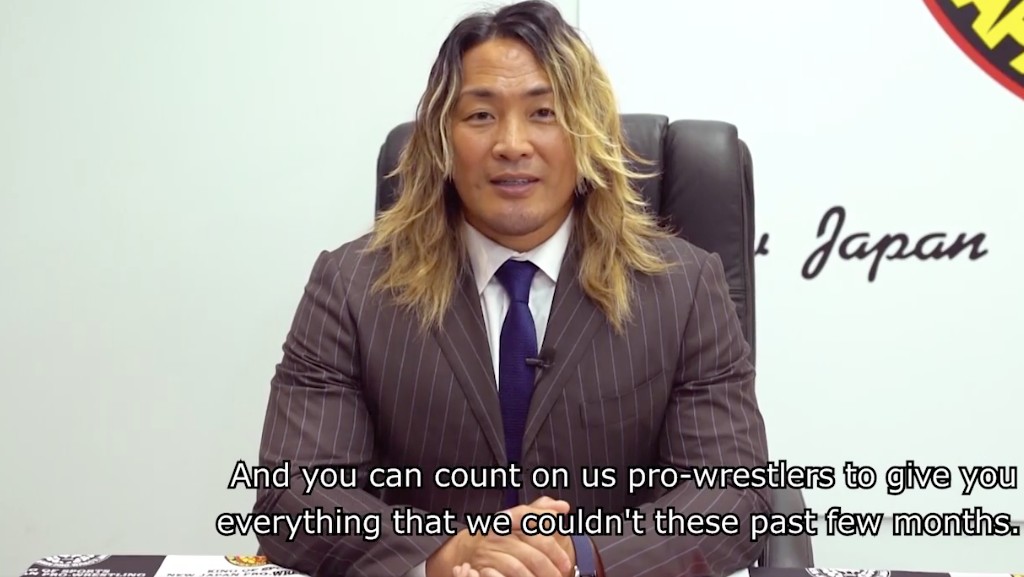 After a pandemic-induced hiatus, New Japan Pro Wrestling has announced a return date. In an online press conference on June 9, NJPW unveiled a unique first show back, the schedule for an altered New Japan Cup, and when they’ll begin to have fans at shows again.

NJPW hasn’t put on a wrestling show since late February, with the combination of COVID-19, a state of emergency in Japan, and, in Harold Meij’s words, “corporate social responsibility,” prompting them to cancel events through early June – slashing the company’s schedule from the Anniversary Show through Dominion. These were huge changes to a calendar already impacted by the Tokyo Olympics, because of which NJPW had moved the annual G1 Climax tournament from July through August to September through October.

At the press conference, Chairman Sugabayashi revealed that when NJPW returns, it will be with more changes, some visible and some behind the scenes. He said that the company has “created guidelines for safely resuming events, with the support of the Japanese Sports Authority” and that “last week we began conducting antibody testing on wrestlers, crew, trainers, and other live show staff.” (Bushiroad announced on its website last week that these antibody tests will be given to everyone working on live events under its umbrella, including those held by NJPW and Stardom.)

Sugabayashi went on to announce a series of shows between June 15 and July 3, which will all stream live of NJPW World with no fans in attendance. The June 15 event will be a Together Project Special with a mystery card that will be announced at the start of the show. “From June 16 through July 3,” said Sugabayashi, “we will present the previously postponed New Japan Cup,” now called the NJPW World Special New Japan Cup 2020.

The name isn’t the only alteration to the tournament, which was originally supposed to take place in March. The initial lineup included a significant amount of talent from outside of Japan, but since the coronavirus pandemic began, Japan has applied travel restrictions to over 100 countries, including the homes of NJPW’s current international regulars. Because of these restrictions, some of which might be lifted earlier than others, the new New Japan Cup only includes the non-Japanese members of the roster who were living in Japan when pandemic began and have not left the country since then: Zack Sabre Jr. and Gabriel Kidd. (Of the Japanese members of the roster, the travel ban impacts Kenta, who lives in Florida.)

With the heavyweight roster reduced by closed borders, the 2020 New Japan Cup now includes several junior heavyweights, who don’t typically participate in the tournament. Here’s the new Cup schedule, minus the yet-to-be-announced “special match” on each show:

The second round of the tournament will take place on June 24 and July 1, the quarter-finals on July 2, and the semi-finals on July 3. The New Japan Cup final will be held on July 11 at Osaka-Jo Hall and will be NJPW’s first event since February with fans in attendance. The venue will be occupied “only at about one-third the normal capacity,” with health and safety guidelines for the staff and the audience. On July 12 at Osaka-Jo Hall, also with a one-third capacity crowd at most, the New Japan Cup winner will have his title match, challenging Tetsuya Naito for both the IWGP Heavyweight and Intercontinental Championships.

New Japan Pro Wrestling’s return comes as Japanese society is reopening, with some changes, after flattening the coronavirus curve. Though the country is still recording new cases, June 7 was its first day in three months with no new COVID-19 deaths. As of the first weekend of June 2020, Japan had 914 confirmed coronavirus deaths out of 17,103 cases, which is as if, adjusting for population size, about 2,371 people had died of the coronavirus in the U.S.

Sports in Japan were heavily impacted, as they were elsewhere, with soccer and baseball seasons postponed and this spring’s major sumo tournament held with no spectators. The country’s pro wrestling scene also took a significant financial blow, with everybody losing money and smaller companies hit harder (Big Japan crowdfunded to pay wrestler salaries; Bushiroad executives reportedly took pay cuts, but no NJPW or Stardom personnel were laid off.) Rather than go on a full hiatus like NJPW, most promotions reduced the number of shows they held and filmed them with no fans in attendance.

Comparison to the sports world also shows how fraught New Japan’s comeback, and the futures of other promotions in the pandemic era, could be. Japanese baseball is set to start its season (minus fans) on June 19, and shortly after practice games began, one had to be canceled because two players from Tokyo’s Yomiuri Giants tested positive for COVID-19. Sports in Japan also felt the human toll of the virus when it claimed the life of a 28-year-old sumo wrestler last month. NJPW’s safety guidelines for shows with spectators will be released later this week, but so far the company has yet to reveal a plan for if a wrestler or other staff member tests positive for coronavirus, or if that’s something they plan to publicly share.