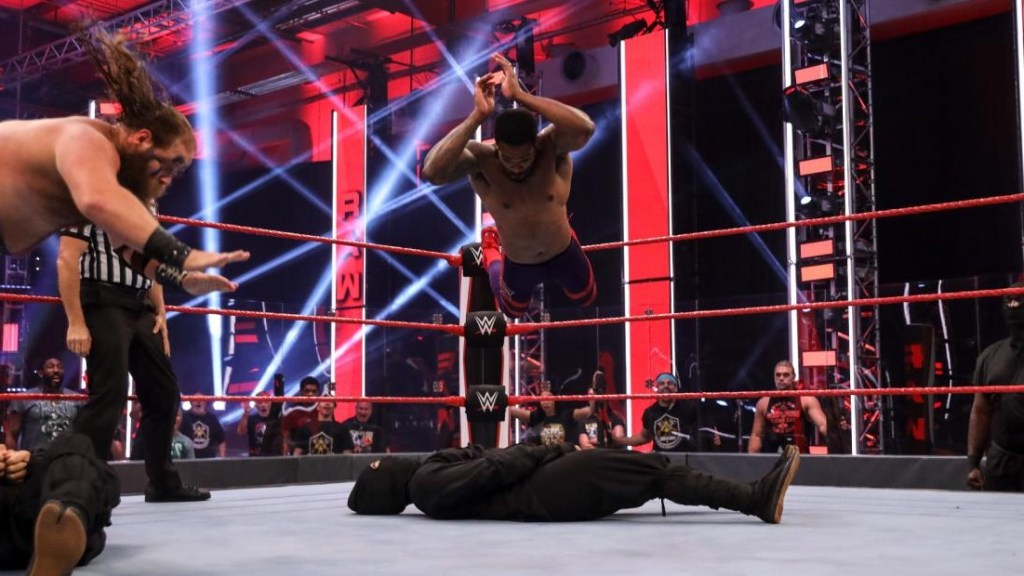 WWE is dealing with the fallout from a positive COVID-19 test within its ranks, shutting down TV tapings for the day in order to test all their staff for the coronavirus, something the company wasn’t doing before. WWE has also responded to a report that came from the Wrestling Observer shortly after the news of the test result broke, that non-staff spectators on last night’s episode of Raw were told not to wear masks.

WWE sent a statement denying the report to Jon Alba of Orlando’s Spectrum News 13. It reads:

Fans have not been in attendance at WWE events since March 13. Yesterday, a select number of friends and family were permitted to attend WWE’s TV production. The individuals were required to participate in medical screenings prior to entering the closed set at our training facilities, and were kept apart from the in-ring performers and production personnel. Attendance was below 20% capacity and social distancing guidelines were adhered to with at least six feet between parties, thus face masks were not required.

That last sentence isn’t entirely true; the Street Profits entered the “audience” on last night’s Raw, temporarily removing the social distancing element of how the spectators were organized. WWE’s statement also implies that if people are six feet apart, there’s no need for them to wear masks in order to prevent the spread of COVID-19. This doesn’t line up with recommendations from medical experts, who generally advise a combination of social distancing and mask-wearing rather than choosing one or the other.

In their statement, WWE doesn’t mention the reports that spectators had to sign waivers saying they wouldn’t hold the company liable if they contracted the coronavirus, but Alba reports that audience members he spoke to confirmed that they signed these waivers, and that they had their temperatures checked before the show. Alba also says the spectators “didn’t find out about the positive COVID-19 test by a WWE developmental talent until after the tapings.” They were invited to attend more tapings this week, but were not asked to get tested for the coronavirus beforehand.

These friends and family of WWE staff spoken to by Alba also said that “there were sanitizing stations on-site,” they felt safe at the tapings, and that they “would attend again, even after the news of the positive COVID-19 test.”