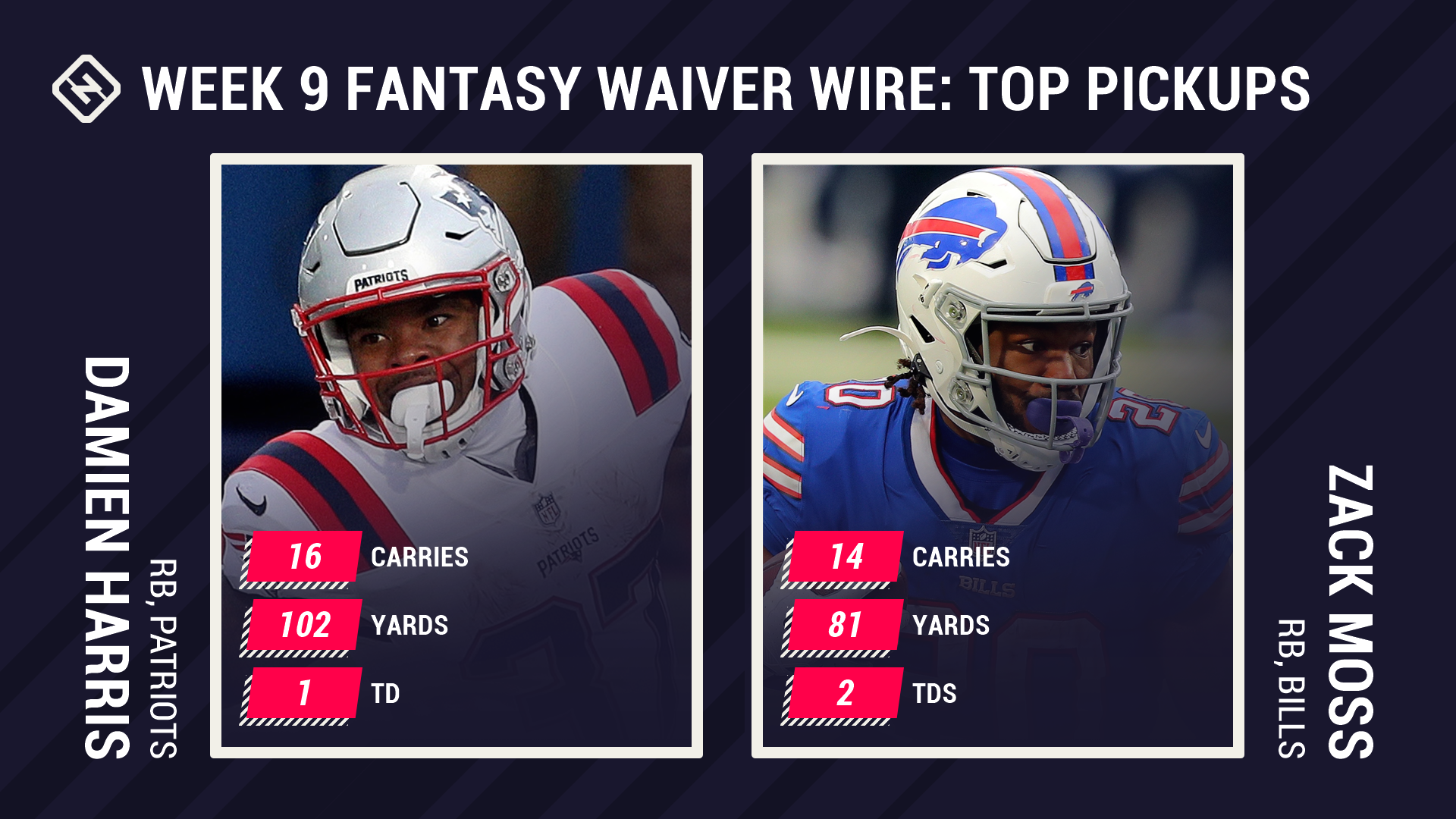 It was a big week for “secondary” running backs, as Zack Moss, Gus Edwards, Damien Harris, and Jordan Wilkins all posted at least 80 yards and scored, while DeeJay Dallas and JaMycal Hasty also found the end zone. All figure to be among the top Week 9 fantasy waiver wire pickups and free agent adds. They will be joined by some high-upside WRs Corey Davis, Curtis Samuel, and Marvin Jones, the latter of whom could really take off after an injury to Kenny Golladay.

Our full free agent list features more secondary backs worth watching (La’Mical Perine, Nyheim Hines, Malcolm Brown), a few WRs with varying levels of short- and long-term value (Marvin Hall, Darnell Mooney, Jakobi Meyers, Allen Lazard, Sterling Shepard), and at least one QB who could be worth stashing (Tua Tagovailoa). We also have a bunch of Week 9 QB, TE, and D/ST streaming recommendations, which can be found at the end of this list.

None of the backs mentioned above are “sure things” to produce in a given week — or even next week — and considering there were no new major RB injuries (that we know of), it’s looking like a week to save your high waiver claims. Moss, Edwards, Harris, Hasty, and Dallas all have legit upside, so if you need a back, it wouldn’t be crazy to use a high claim on them, but it really depends on your roster situation. We’re at the point in the season where you might have to do whatever it takes to win a specific week, and that might mean going all-in on a committee back with your waiver claims. None of the receivers are “must-haves,” but, again, if you’re short on WRs and have a big upcoming matchup, it’s not crazy to use a relatively high claim on someone like Davis or Jones.

It’s all about surviving and advancing for some teams right now; others might have the luxury of holding their waiver positions and waiting for a big breakout/injury later in the year. Honestly assess your team and figure out which camp you fall into.

Zack Moss, RB, Bills. Moss is owned in 53 percent of Yahoo leagues, but that number should go way up after his 81-yard, two-TD game against New England in Week 8. Moss tied for the team lead with 14 carries, posting a season high in touches a week after totaling 72 yards on 10 touches. Moss is clearly trending upward and is Buffalo’s preferred option around the goal line, and it’s encouraging he’s had two games with three receptions, too. Next week’s matchup against Seattle isn’t a favorable one, but Moss always has upside in standard leagues because of his touchdown potential.

Gus Edwards, RB, Ravens. With Mark Ingram (ankle) inactive, Edwards rushed 16 times for 87 yards and a score against the Steelers in Week 8. He ultimately split time with JK Dobbins (15 carries for 113 yards), but Edwards started and was the preferred option RB option around the goal line. Ingram is in danger of missing next week’s game against Indianapolis, and as long as he’s out, Edwards has value. He saw appreciable touches and always had touchdown potential even when Ingram was healthy, so unless Dobbins really starts taking over the backfield, Edwards is worth owning.

Marvin Jones, WR, Lions. Jones has disappointed fantasy owners this year, but he snapped out of his funk with two touchdowns in Week 8. He caught just three-of-seven targets for 39 yards, but with Kenny Golladay (hip) hurting, Jones could be in position for another big game next week against Minnesota. Even if Golladay is back, Jones has boom-or-bust upside as a WR3 in that favorable matchup.

Damien Harris, RB, Patriots. Harris further cemented his status as New England’s No. 1 back in Week 8, rushing 16 times for 102 yards and a score. It’s never easy to trust a Patriots RB, which is probably why Harris is owned in just 46 percent of Yahoo leagues, but with an average of 12.8 touches and 76.3 total yards per game, he has a steady floor. The upcoming return of Sony Michel (quad/COVID) could affect Harris’s workload, but he’s worth grabbing with the Jets on deck in Week 9.

Jordan Wilkins, RB, Colts. Wilkins contributed early and often for the Colts in Week 8, finishing with 89 rushing yards, a TD, and a two-point conversion on 20 carries. He also added 24 yards on one catch. Jonathan Taylor struggled with just 22 yards on 11 carries, and the Colts simply seemed to prefer using Wilkins to run out the clock late in the game. It would be premature to say Wilkins is even a co-No. 1 with Taylor going forward, but he certainly should be on fantasy radars and is worth adding as a free agent.