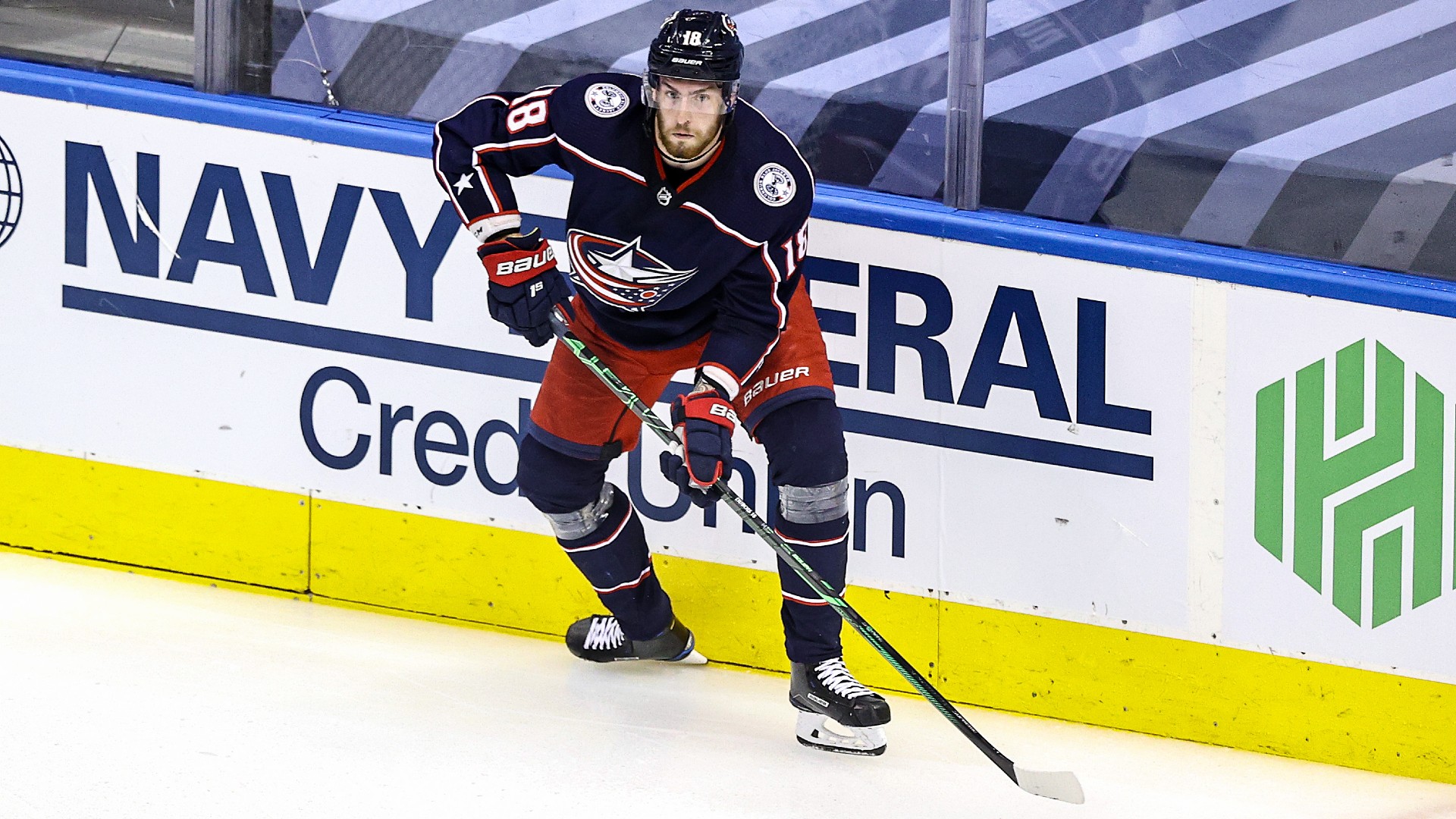 There’s a whole lot of drama coming out of Columbus these days — and, for once, it’s not entirely about John Tortorella. Instead, it’s focused on Pierre-Luc Dubois. The Blue Jackets’ prized 22-year-old center reportedly needs a change of scenery.

Dubois is coming off a season in which he potted 49 points (18 goals, 31 assists) in 70 regular-season games before tacking on 10 points in 10 playoff bubble games. In three NHL seasons, he has collected 158 points in 234 games for Columbus and would be a great pickup for any team.

Jon Cooper calls Pierre-Luc Dubois a “baller.” Says he’s got deceiving speed: “He’s just got that blend of quickness, he’s tough. He’s a guy that plays with an edge. He walks the line in how he plays, which even makes guys like him harder to play against. He’s a cornerstone guy.”

Obviously, it could be a tad difficult this year for general manager Jarmo Kekalainen to ship out the disgruntled No. 1 centerman — with quarantine and border issues — but it sounds as if Dubois’ time in Ohio is winding down.

So, what exactly is going on? And how did it get to this point? Here’s a timeline of everything we know, including rumored destinations.

Is this where the relationship between Dubois and Tortorella soured? Before the start of the third period of Game 2 in Columbus’ qualifying-round series against the Leafs, Dubois goes to the bench and gets laid into by Tortorella — including finger-pointing. Dubois goes back at him, respectfully. It looks as if Tortorella yells “Wake up!” at him at one point:

The Blue Jackets lost that game 3-0 but Dubois responded in Game 3 with a hat trick, including the overtime winner. According to the Columbus Dispatch’s Brian Hedger, there were other clashes during the regular season that involved public airing of grievances.

Dubois signs a two-year, $10 million contract with the Blue Jackets days before the start of training camp.

“I’m excited to have the contract done and to be able to get back on the ice and play hockey again, especially with everything that is going on in the world right now,” Dubois says after the team announces the signing. “I’m very fortunate and looking forward to being with my teammates at camp and the start of a new season.”

Sounds like everything was hunky-dory, right? Well, just prior to the announcement, TSN’s Pierre LeBrun reported that the restricted free agent was not in Ohio and “Dubois may be looking for a change of scenery.” Per The Athletic’s Aaron Portzline, Dubois had been skating in Columbus but left. LeBrun added about an hour later that Kekalainen was “confident” he would get a contract done.

Pierre-Luc Dubois is not in Columbus as camp approaches and remains unsigned. And now there are rumblings from a few teams around the league that Dubois may be looking for a change of scenery. Maybe wishful thinking on their part. But stay tuned on this one.

The Blue Jackets open camp and Dubois is asked about his trade request, but he doesn’t offer up much, saying a few times that conversations between he, agent Pat Brisson and Kekalainen are private and will remain as such.

Tortorella confirms in an interview with Columbus radio station WBNS that the team’s first-round draft pick in 2016 (third overall) already has his bags packed.

“He wants out,” Tortorella tells Rothman and Ice. “(Dubois) hasn’t given a reason why he wants to leave. He should get in front of it. That’s the way I think you should go about your business, and be the best team you can be.

“He needs to continue to do the things to help this team win and be the best teammate he can be, or I’m not sure where it goes. It’s a situation and we’ll go to it day by day.”

Dubois is in the lineup for the Blue Jackets’ 2021 season opener, a 3-1 loss to the Predators in Nashville. He’s slotted in as the No. 1 center between Mikhail Grigorenko and Oliver Bjorkstrand. In 18:30 of ice time, most among Columbus forwards, he notches one shot on goal and two hits and wins 12 of 19 faceoffs.

Through the Blue Jackets’ first four games, Dubois has only potted one goal on seven shots. In the team’s Monday matinee win over the Red Wings, the centerman only played 15 minutes and three seconds; he averaged closer to 18 minutes in the other three contests. In the second period against the Red Wings, he didn’t take a single regular shift and the one shift he did take was in the last seven minutes of the middle frame.

Was he benched? Head coach John Tortorella said no.

“You guys are really dissecting this benching and sitting. I guess I benched Max [Domi] the other night, you said. Slow down, boys,” Tortorella said after the Jan. 18 game. “You’ll know when I bench someone. I have to make decisions when the game is being played, when I think someone is going at certain times. But don’t try to manifest something as far as the benching. That’s all part of a three-period hockey game.”

Dubois did score that lone goal, the game-winner, in the third period on Monday.

As mentioned, trades could be hard to complete because of border restrictions and the fact Dubois would have to quarantine for 14 days if shipped north — which is looking more likely.

Sportsnet’s Elliotte Friedman reported in his “31 Thoughts” column that a number of teams want Dubois, with the Canadiens and Jets the more serious pursuers.

On Jan. 12, Darren Dreger added fuel to the Jets rumor on TSN’s “Insider Trading,” saying there has been speculation they’re looking at Dubois and noting that Winnipeg has its own disgruntled forward in Patrik Laine.

On Jan. 14, former NHL insider Nick Kyrpeos tweeted that Dubois wants to go to the Canadiens — which makes sense because he hails from Ste-Agathe-des-Monts, Que. The only catch, Kypreos said, is that the Blue Jackets want Nick Suzuki in return and the Canadiens may be wary of trading the future star. (Suzuki looked fantastic between Jonathan Drouin and Josh Anderson in Montreal’s opener.) Kypreos added that rookie defender Alexander Romanov was deemed untouchable.

The Fourth Period’s David Pagnotta has also added the Ducks, Rangers, Kings and Flames to the mix. Calgary is an interesting trade partner as there has long been speculation about Johnny Gaudreau being shipped out of Alberta.