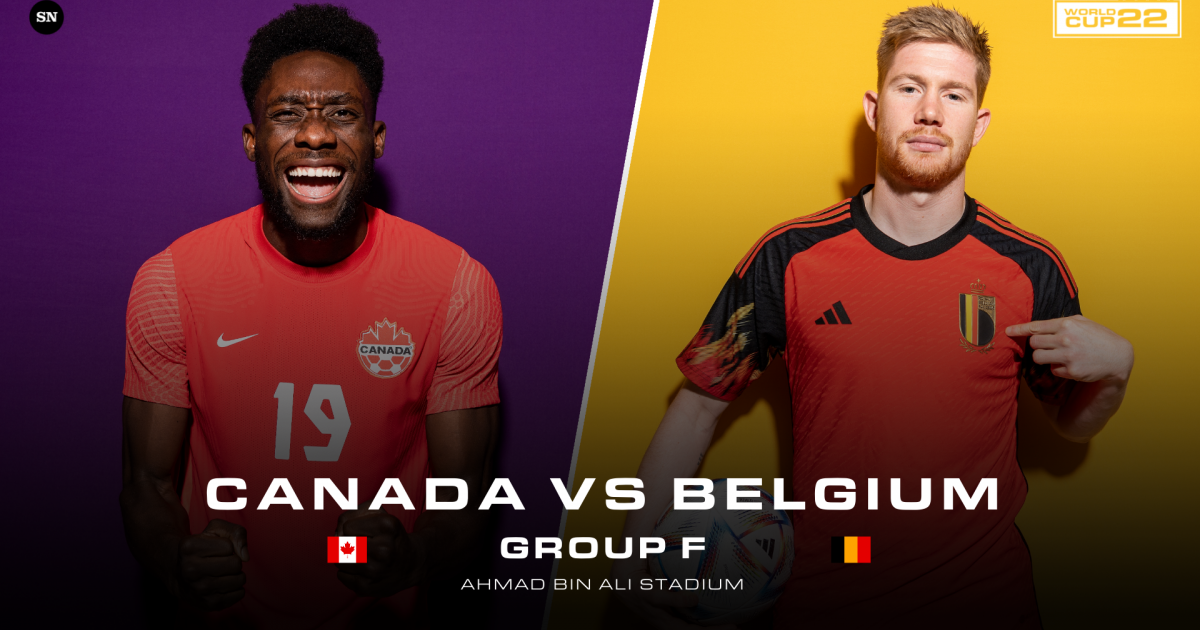 It’s been 36 long years in the making, but Canada are back at the World Cup.

Les Rouges have a tough opening test to the 2022 FIFA tournament against Group F powerhouses Belgium, who will be expected to finally live up to the hype surrounding their so-called ‘Golden Generation’.

Belgium have the talent, but have not been able to convert that into silverware. If 2022 is to be any different they must first avoid a potential upset against an upstart Canada team that has nothing to lose in its first men’s World Cup tournament since 1986.

This match promises to have goals in it. Both sides have dangerous attacking players, and the question could come down to which backline and goalkeeper will be the standout performers at the Ahmad Bin Ali Stadium.

Sporting News is tracking live scoring updates and highlights for Canada vs Belgium at the 2022 World Cup. Follow below for complete results from the Group F match in Qatar.

MORE: How to bet Canada vs. Belgium

39 mins: Have Canada got a second penalty here? Axel Witsel’s challenge on Richie Laryea is clumsy and he clearly catches the Canada midfielder… but after a long pause for a VAR check, no foul!

VAR said no penalty… do you agree? 🤔

36 mins: If Canada can find a little more composure in the final third, surely there’s goals here for them. They’re just rushing the final ball a little bit; with a bit more calmless, they can turn their superiority into tangible reward.

32 mins: And now it’s Jonathan David’s turn to threaten, getting on the end of Junior Hoilett’s perceptive cross from the right, but the striker cannot steer his header on target. All that’s missing for Canada is the finish.

30 mins: Alistair Johnston pushes forward down the right and tumbles under a tackle just outside the area, but quickly picks himself up and smashes in a shot from the loose ball that Thibaut Courtois pushes away diving to his right.

An absolute ROCKET, but it’s right at the Belgian keeper! #FIFAWorldCup pic.twitter.com/Vr1unGVKN2

27 mins: Alphonso Davies is looking super sharp after recovering from that hamstring injury, and slices through the middle of the Belgium defence once more. He plays a one-two with Jonathan David before knocking it square for Atiba Hutchinson, but the veteran slices wide from the edge of the area.

23 mins: Belgium might be struggling at the back but there’s no doubting their quality up front. Eden Hazard’s clever touch sets up an attack which continues with a fine Kevin De Bruyne dummy, but Michy Batshuayi’s touch is poor, allowing Atiba Hutchinson to make the crucial tackle.

21 mins: Canada have shown plenty of bravery in the opening quarter of this match. They’re pressed and harried Belgium relentlessly, and they’ve been on the front foot throughout. Can they find the cutting edge to reward their performance so far, though?

18 mins: It’s been a great start from Canada although without the goal to back it up. Belgium have Thibaut Courtois to thank for that.

Alphonso Davies had the chance to put Canada in front but Thibaut Courtois saved his penalty! 🧤 #BBCFootball #BBCWorldCup

16 mins: A superb long pass sets Junior Hoilett racing into the area down the right side; he checks back but, with Alphonso Davies getting up in support, opts to shoot and drags his effort wide. More joy for Canada running in behind though; Belgium just can’t cope with their pace.

13 mins: It is absolutely all Canada here! Junior Hoilett’s deep left-wing cross is nodded down by Tajon Buchanan and Jonathan David has a shooting chance, but his effort is blocked. Belgium just haven’t got going and they’re lucky not to be behind.

PENALTY SAVED! 10 mins: Alphonso Davies comes up and puts his penalty low to Thiabut Courtois’ right, but the goalkeeper guesses right and saves, Jonathan David lifting the rebound over the bar! Canada’s wait for a first World Cup goal goes on!

From the corner, Buchanan’s deflected effort loops up and for a moment looks like it’s going to loop over Thibaut Courtois, but the goalkeeper is able to catch.

4 mins: Canada are still to really get a spell of possession here, although Stephen Vitoria shows plenty of bravery to beat Michy Batshuayi to a header on halfway, and gets clattered for his pains.

1 min: Alistair Johnston is a very, very relieved man. His square pass across the defence is easily cut out and suddenly Belgium are bearing down on goal with less than 50 seconds on the clock. Michy Batshuayi’s shot is saved by Milan Borjan, and that’s an early letoff for Canada.

KICKOFF: Jonathan David gets us started, and Canada’s first World Cup match in 36 years is underway!

1 mins to kickoff: And we’re almost ready to go!

Sing it loud and proud! The Canadian national anthem at the #FIFAWorldCup pic.twitter.com/4fXvxpcyrZ

3 mins to kickoff: Here come the teams from the tunnel, and the national anthems mean the first whistle is moments away…

5 mins to kickoff: How are you feeling Canada fans?!

The world is about to hear us.

Canada is ready to make some noise at this tournament.#FIFAWorldCup pic.twitter.com/IrxN9PQPQs

10 mins to kickoff: A reminder of how Canada fared in their sole previous World Cup appearance, back in 1986; they lost all three games, opening with a 1-0 defeat by France before going down 2-0 to both Hungary and the Soviet Union, so are still to score in the finals.

Belgium are making their 14th World Cup appearance and a third in succession, reaching the quarter-finals in 2014 and finishing third in Russia four years ago. The Red Devils have got out of their group in six of their last seven participations, in fact – and will be well fancied to go deep into the knockout rounds again this time.

15 mins to kickoff: Belgium fans are looking pretty festive this evening, they’re settling in for a good World Cup!

20 mins to kickoff: Atiba Hutchinson is in good company this evening!

25 mins to kickoff: Fans in the mood at the Ahmad bin Ali Stadium.

30 mins from kickoff: Club Brugge teammates on opposite sides this evening – both start on the bench.

40 mins from kickoff: Canada’s warmup is in full swing, and the atmosphere is building nicely here.

Canada are here to warm up at Ahmad Bin Ali Stadium. DJ plays Started From The Bottom to greet them. Canadian fans getting loud early. pic.twitter.com/dnDque3Bjm

45 mins from kickoff: Belgium are in the house and it looks like these boys mean business…

50 mins from kickoff: Atiba Hutchinson will wear the captain’s armband for Canada tonight, and it’s been quite the journey to this point for the 39-year-old midfielder.

Atiba Hutchinson has waited almost 2 decades for this moment.

A story of commitment, patience & unwavering loyalty.@rwesthead with a TSN Original – The Captain pic.twitter.com/IQy0HNRume

1 hr from kickoff: No real surprises in the Canada lineup, with the big boost the news that Alphonso Davies is fit to start after a hamstring strain while Stephen Eustaquio is also selected having recovered from a muscle injury.

Michy Batshuayi leads the Belgium line in the absence of record goalscorer Romelu Lukaku, who has a thigh injury, while Thomas Meunier is ruled out by a broken cheekbone; Leander Dendoncker is on the right of a three-man defence with Timothy Castagne starting at right wing-back. Jan Vertonghen is, however, fit after a knock.

1 hr 5 mins from kickoff: Here’s the first big news of the evening – team news is IN!

1hr 15 mins from kickoff: This is who Canada will have to beat tonight if they are to score their first goal in a World Cup finals:

1hr 30 mins from kickoff: It’s safe to say Canada’s return to the World Cup after 36 year away has captured the imagination of pretty much EVERYONE in the country:

Canada is back! Best of luck to the Canada men’s national soccer team – we can’t wait to see you on the pitch later today. #WeCAN https://t.co/65zmMPRizt

1 hr 45 mins from kickoff: If you don’t know anything about Canada, their story, and how they’ve come out of nowhere, this video will get you caught up:

2 hrs from kickoff: A peek into the Belgium locker set for the No. 2 team in the world to arrive at the stadium.

2 hrs 30 mins from kickoff: The stage for today’s match between Les Rouges and Les Diables Rouges is the Ahmad bin Ali Stadium.

3 hrs 30 mins from kickoff: Whatever the final result, this is set to be a momentous day in Canadian soccer with the match played at 2 p.m. ET and 11 a.m. PT across the Great White North.

3 hrs 30 mins from kickoff: This seven-minute video will get you set up from a Canada standpoint ahead of the match:

4 hrs 15 mins from kickoff: Canada will have a special fan. Despite having a couple of Real Madrid players featuring for Belgium, Carlo Ancelotti will be wearing red:

“At the World Cup I’m supporting Canada, they haven’t qualified in many years & it’s my second home.

I’ll be there with a Canada shirt on” 🇨🇦

5 hrs from kickoff: Hello, and welcome to The Sporting News’ live coverage of the Group F clash between Canada and Belgium. The World Cup is warming up nicely, and today marks a welcome return for the North Americans. They last qualified for the finals in 1986, and have some making up to do against a Belgium side that seems to be tipped for glory at every tournament but fails to deliver every time. It should be an intriguing matchup!

We believe in what we can do as a team 💪

Caption Atiba Hutchinson speaks about the mindset of #CANMNT heading into their first @FIFAWorldCup match in 36 years. #WeCAN pic.twitter.com/941ZFkIfkM

Canada received a timely triple fitness boost ahead of their first World Cup fixture since the 1986 edition of the competition. Alphonso Davies, Stephen Eustaqio and Milan Borjan were all cleared to start despite doubts earlier in the week.

With Romelu Lukaku ruled out with a thigh injury, Michy Batshuayi started up front for Belgium. Thomas Meunier missed out with a cheekbone injury, Leander Dendoncker starting on the right of a three-man defence and Timothy Castagne in at right wing-back, although Jan Vertonghen was fit after a knock.

The match will start at 10 p.m. local time at the Ahmad Bin Ali Stadium. Here’s how that translates to the major global territories around the world:

Watch the match on fuboTV in USA: