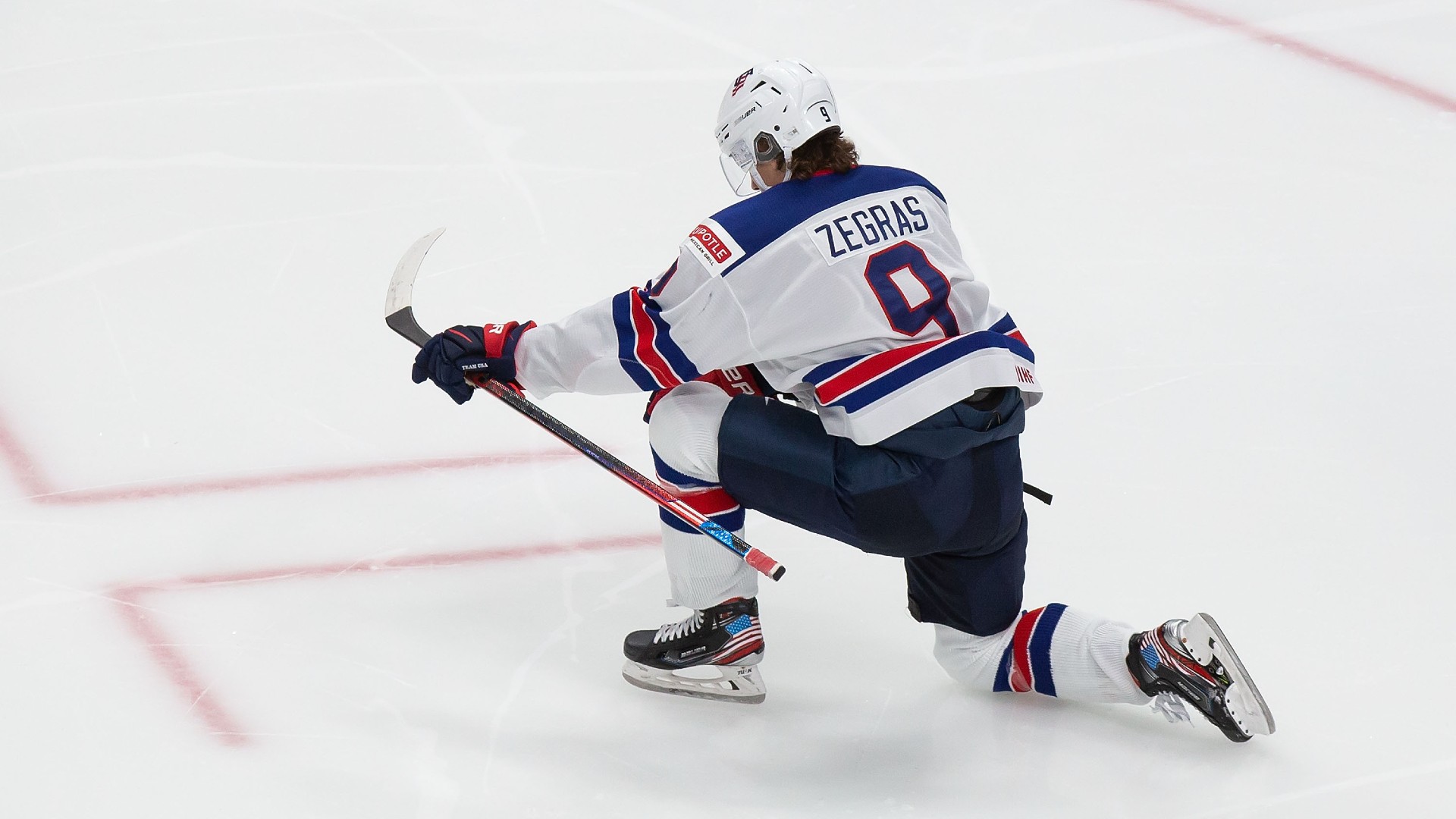 And on the 12th day, the Hockey Gods gifted us with the perfect ending to the 2021 IIHF World Junior Championship — Canada versus the United States with a gold medal on the line.

“This day has been marked on all of our calendars since being here,” said Newfoundland’s Alex Newhook after his goal 59 seconds in was the eventual game-winner against Russia in the semis. “To finally be here and see that the work we put in is paid off to this point. It’s exciting.”

Canada has steamrolled through the competition to this point: The team’s allowed just four goals  — all on the power play — on 124 shots through its first six games. It achieved three shutouts with the last two coming in the quarterfinals (3-0 vs. Czechs) and semis (5-0 vs. Russia). Netminder Devon Levi has been on fire (reminder: the Quebec goalie wasn’t even invited to summer camp) with a teeny-tiny 0.53 goals-against average and an almost perfect .975 save percentage.

Levi is also the second Canadian goalie in tournament history to record three shutouts, joining Justin Pogge who did it in 2006. But he’s got other things on his mind.

“I’m not playing for a shutout record. I’m playing for a gold medal,” said Levi, after stopping all 28 shots by Russia. “It’s something maybe to look at after the tournament, but the job’s not done yet.”

The team’s offense has also been firing on all cylinders. In addition to allowing the fewest goals in the tournament, they’ve also scored the most (41), with every skater notching at least a point. But as head coach Andre Tourigny said Tuesday afternoon, quoting Phil Jackson: “Doesn’t mean a thing without the ring.”

And it won’t be easy. While hockey pundits are calling this group one of Canada’s best in world juniors history, the boys from the north now face their stiffest test of the entire tournament in their southern neighbors.

MORE: How Canada and the U.S. match up for gold-medal game

Since losing the lid-lifter to Russia on Christmas Day 5-3, the Americans went on a tear winning five straight and allowing just five goals. Netminder’s Dustin Wolf (one) and Spencer Knight posted back-to-back-to-back shutouts with Team USA’s shutout streak ending in the quarters against Slovakia at a World Juniors-record 218:53. Knight and Dustin Wolf also combined for 245:07 of shutout time with a goalie in the net.

The United States also brings a potent offense that has notched 34 goals (second-best to Canada) and a tournament-best 42.86 percent efficiency on the power play. Head coach Nate Leaman loves to roll his top three lines, led by the trio of Trevor Zegras, Arthur Kaliyev and Alex Turcotte. Zegras (six goals, 10 assists), by the way, is making his way up the USA Hockey world junior record books and enters the game tied with Canada’s Dylan Cozens (eight goals, eight assists) — doing the same for Hockey Canada — for the scoring title.

There’s a lot of history coursing through the storylines of this game.

The two stellar netminders, Levi and Knight, who not only will battle it out tonight will do so in Hockey East this season and are both Panthers prospects. Newhook and American Matthew Boldy are roommates at Boston College and Wisconsin’s Dylan Holloway and Cole Caufield will be on different ends of the rink. The 2021 edition is also the fifth time the two countries will square off in the ultimate game with the United States winning three of the last four — out of four.

“I remember both times I was watching with my dad and we were pretty pumped up,” Alex Turcotte said Monday night when asked whether he watched 2010 and 2017. “Those are legendary moments in this tournament for USA hockey and it was awesome to watch and to be able to play in the Canada-USA gold-medal game in this tournament. It’s a dream come true and we’re gonna make the most of it.”

A gold-medal game isn’t anything new for Canada; in fact, this year’s team has six returnees — and Tourigny — aiming for back-to-back golds.

“The dying seconds counting down and seeing the clock hit the buzzer and that final relief of winning the gold medal,” remembered Dawson Mercer of last year’s gold-medal win over Russia. “The celebration with the guys that’s the best part. We battled all together and when you get to sing your anthem on the blue line, got the gold medal around your neck, it’s all memories that will never go away. So I’m really looking forward … to make that happen again.”

Both teams have been through a lot: bubbles and quarantines. Zoom calls, daily COVID-19 testing, and boring meals. Both teams talk about how close their team has become. Both teams have their eyes on the prize.

It all comes down to this: Canada versus the United States. Only one can be golden in the end. Who will it be? We’ll find out soon, so pitter-patter, let’s get at’er.

Sporting News had all the action as the United States defeated the Canadians for gold.

11:50 p.m. — Thirty seconds and the Americans are keeping the puck on the boards behind the net.

11:48 p.m. — Point shot and Spencer Knight does full splits for the stop. Both saves with empty net.

11:46 p.m. — Connor McMichael breaks in, makes a quick move and Spencer Knight makes the stop. McMichael slams the stick into the glass.

11:44 p.m. — Five minutes to go. Canada outshooting the Americans 8-1 in the period but trailing by two.

11:42 p.m. — Another scramble at the net with Knight just laying on his back to keep the puck out. Canada coming oh-so-close.

11:40 p.m. — Seven minutes to go. Doesn’t feel like there’s been much offensive zone time for the Americans in this period. Canada is getting some chances but can’t find the back of the net.

11:39 p.m. — Wow. Mad scramble and somehow the puck doesn’t go in for Canada. They don’t seem to have much puck-luck tonight.

11:35 p.m. —  Ten minutes to go in regulation. Canada down 2-0 and have five shots in the final frame. USA does have one but they do have the two-goal lead.

11:35 p.m. —  Canada trying to get something going but Bobby Brink once again laying the body on the line with some big-time blocks.

11:28 p.m. — Canada getting some offensive zone time but Knight is there and the Americans block a few including a big one by Bobby Brink on a Kaiden Guhle point shot.

10:58 p.m. —  Spencer Knight is on point tonight and the Canadians are getting frustrated as Connor Zary slams the stick at the bench.

10:52 p.m. — Canada down the right wing but Spencer Knight again makes the save. Americans are weathering the storm as Canada gains momentum.

10:47 p.m. — Bowen Byram, shorthanded, cuts in and rings the backhander off the pipe.

10:44 p.m. — USA trying to break in 2-on-1 but Jakob Pelletier hooks the Kaliyev to slow him down and gets called for hooking. First power play for the Americans and they have the best one in the tournament.

10:31 p.m. — GOAL. Seconds in, Levi loses track of the puck as it hits the back bar when it goes behind the net and pops out to Trevor Zegras who tucks it in. USA leads 2-0.

10:06 p.m. — Bobby Brink takes an offensive zone penalty. Canada will have a chance to tie but the power play has not been great. Canada has just one power-play goal in the last three games.

10:01 p.m. — Canada’s top line is getting pinned in its own end with the American top line.

9:58 p.m. — The United States’ goal is the first even-strength goal Canada has allowed all tournament long. It also marks the first time the Canadians have trailed in the tournament.

9:53 p.m. — Americans now having some zone pressure. Ends with Cam York high point shot snagged by the glove of Levi.

9:52 p.m. — Canada’s backchecking has been fantastic all tourney and continues tonight;

9:50 p.m. — Good defense by the United States as Dylan Cozens flies down the left wing. Then off a turnover another good defensive play by the Americans in the high slot. Shots right now are 5-2 in favor of Canada.

9:47 p.m. — Much different Canada team right now as they’re not getting much penetration to the middle. USA head coach Nate Leaman loves to keep shots to the perimeter and so far the majority have been outside.

9:42 p.m. — USA with a little pressure but Sanderson with a turnover to end it.

9:41 p.m. — Canada buzzing around the USA net but nothing goes — even when Spencer Knight lost his stick.