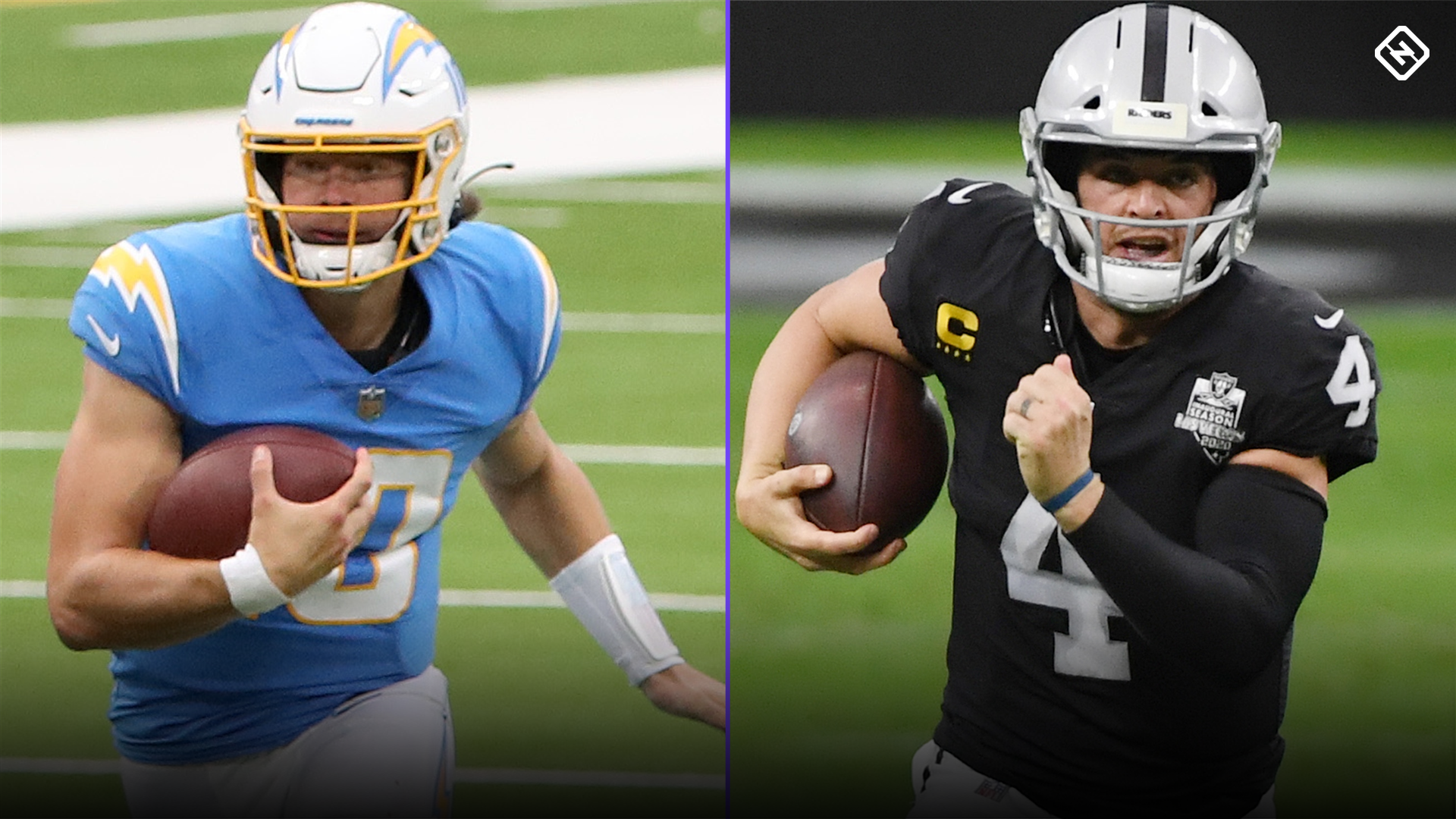 In an AFC West showdown, the Raiders (7-6) will host the Chargers (4-9) at Allegiant Stadium for the final Thursday Night Football game of 2020. The Raiders are listed as -3 favorites (-170 ML), and the over/under has settled at a whopping 53.5 total points.

These divisional foes have a lot to be optimistic about long-term, but both probably feel some disappointment over their 2020 campaigns. The Chargers have their quarterback of the future, No. 6 overall pick Justin Herbert, but L.A. has been ravaged by injuries this season. Meanwhile, the Raiders are just four weeks removed from a 6-3 record, but they have struggled in the second half of the season, losing three of their past four games.

The Chargers will be battling for a respectable final record, while the Raiders will be fighting to keep their playoff hopes alive. Let’s take a look at which team seems likely to prevail, with a comprehensive betting preview and BetQL’s full predictions against the spread, on the moneyline, and on the over/under.

In just one offseason, the Chargers franchise has undergone two massive changes. They moved into a new home, SoFi Stadium in Inglewood, California, and they moved on from 16-year QB Philip Rivers, drafting 6-6, 236-pound Oregon stud Justin Herbert with the sixth overall pick.

In 12 games, Herbert has thrown for 3,467 yards and 25 touchdowns. He has completed 66.3 percent of his pass attempts, thrown just 10 interceptions, and maintained a QB rating of 94.7. His record keeps him from comparisons to some of the greatest rookie QBs in NFL history, but his stats do not. He’s on track to break the rookie record for TD passes, which would see him eclipse the likes of Baker Mayfield (27 in 2018), Peyton Manning (26, 1998), and Russell Wilson (26, 2012). If he had started Week 1, he also would have had an outside shot of Andrew Luck’s rookie-season record of 4,367 yards.

But there will always be ifs, such as what if Austin Ekeler had been able to suit up for the six games he was so sorely missed? The third-year back had 146 all-purpose yards last week, helping Herbert to his third win as a starter. Ekeler is listed as questionable for tonight’s game with a quad injury, but he’s expected to play.

What if L.A. had its defense at full strength this season? All-Pro safety Derwin James has missed the entire season with a torn meniscus. Defensive end Melvin Ingram has missed a handful of games and now finds himself in his second IR stint of the season with a knee injury. Stud defensive end Joey Bosa, defensive tackle Justin Jones, and cornerback Chris Harris Jr. have also battled injuries throughout the season. Two-time Pro Bowl cornerback Casey Hayward has also missed time, and linebackers Uchenna Nwosu (back/shoulder) and Emeke Egbule (illness) will likely both miss tonight’s game.

These injury woes have affected L.A.’s consistency, especially in the second halves of games. The Chargers rank 26th in points allowed, and over 60 percent of the points they have surrendered have come after halftime. Perhaps most frustrating, they have held opponents to the seventh-fewest passing yards in the NFL, yet rank 24th in passing TDs allowed. Their rushing defense and third-down defense have been awful all season, and a date with Raiders back Josh Jacobs (48 rushing first downs, fifth in NFL) and tight end Darren Waller (19 first-down catches on third downs this season, second in NFL) probably won’t help those trends.

L.A.’s D stepped up against the Falcons last week, forcing three turnovers and limiting Matt Ryan’s offense to 17 points. It was the first time since Week 1 that the Chargers held an opponent to under 21 points. They had surrendered an average of 30.2 points between Week 2 and Week 13, capped off by a 45-0 stomping by the Patriots at home two weeks ago.

If the defense shows up to play again tonight — and avoids further injury — they have a good chance to compete with Herbert and the weapons around him. When healthy, Ekeler is one of the most dynamic dual-purpose backs in football, and three-time Pro Bowl receiver Keenan Allen continues to distinguish himself as one of the best, making nearly every leaderboard with 99 catches, 975 receiving yards, and eight touchdowns on the season. He also leads the league with 27 first-down catches on third downs, eight more than any other receiver. Allen is questionable with a hamstring injury this evening, but if he and Ekeler can suit up, they’ll definitely be helping to put points on the board.

The Chargers are 1-5 on the road and 0-4 as visiting underdogs this season, but they do have .500 records against the spread both on the road and as road ‘dogs. They might not beat the Raiders, but they definitely won’t go down without a fight.

The Raiders also have a new place to call home this season: Allegiant Stadium in Las Vegas. They started their tenure in Vegas impressively, posting a 6-3 record thanks to steady quarterbacking leadership by Derek Carr and great seasons from the aforementioned Jacobs and Waller. But the Raiders have stumbled a bit lately, losing three of their past four games and experiencing some injury issues of their own.

The Raiders still have a good shot at finishing strong and making the AFC Playoffs, with the Chargers, Dolphins, and Broncos closing out their schedule (the first two of which are on prime-time TV). If they do make the playoffs, it will almost assuredly be thanks to Carr. The veteran is on pace for his third-consecutive 4,000-yard season, and he has completed 68.2 percent of his passes. He has 24 touchdowns, seven interceptions (1.6-percent INT rate), and a 102.1 QB rating.

The steady presence of both Jacobs and Waller have helped Carr immensely. Jacobs, who has battled hip injuries and now an ankle ailment, ranks third in the AFC with 831 rushing yards and second among AFC RBs with nine touchdowns. Waller ranks seventh in the NFL (and second among TEs) with 84 catches, and he’s third at the position with seven TD grabs. Offseason acquisition Nelson Agholor, who was cast away from Philly for dropping too many balls, has been the offensive surprise of the season for Jon Gruden’s team. The veteran receiver has seven touchdowns and a 16.7-yards-per-reception average.

Offense has really never been an issue for this team in 2020. If you take away the six-point dud Vegas put up in Atlanta three weeks ago, this team has averaged 28.6 points and 379.8 total yards per game. It’s the other side of the ball that has been the problem, which led to the recent termination of defensive coordinator Paul Guenther. New DC Rod Marinelli inherits a squad that has given up the third-most points and the second-most rushing scores. Vegas ranks 25th in total yards allowed, 27th in first downs surrendered, and 29th in third-down defense.

Making matters worse, the Raiders will be without five defensive starters tonight. Second-year defensive end Clelin Ferrell will be out with a shoulder injury, and linebacker Nicholas Morrow, cornerback Damon Arnette, and safety Johnathan Abram will all be out with concussions. Defensive tackle Maliek Collins has been on injured reserve with a hamstring injury since early December.

The Raiders are 3-3 against the spread at home, but they won and covered the only home game in which they were favored. Their only loss to a losing squad all season was to the Falcons in Week 12. Gruden and offensive coordinator Greg Olson should have this offense ready to go tonight, but it’s Marinelli’s injury-ravaged defense that serves as the crapshoot in Vegas for this one.

With both of these teams banged up defensively, I’m taking the OVER both at the half (26.5) and on the total (53.5) this evening. These offenses have far too many weapons for this to end up a low-scoring affair, especially with so many key injuries on both defensive units. Based on execution, experience, and coaching, I’ll be rolling with the Raiders at home in a game they must win to keep their playoff hopes alive.

The BetQL Best Bet Model at least partially agrees, putting a two-star rating on the Raiders moneyline at halftime (-150) and at the end of the game (-170). The Model also lists the OVER at the half as a two-star rating, but it recommends shying away from the end-game total, labeling it a low-value bet. As for the spread, the Model puts two stars on the Chargers covering +2 at the half and one star on L.A. covering the +3 for the game.

I love our Model, but I respectfully disagree with its take on both the over/under and the Chargers covering the three points they are getting. Carr and his arsenal of weapons have handled the overwhelming majority of poor teams they have faced, and even outdueled the likes of Patrick Mahomes and Drew Brees this season. Vegas also beat L.A. 31-26 in these teams’ first meeting of the season at SoFi in Week 9. I’m taking the Raiders 33-27.

You can find all updated lines, odds, spreads, and NFL picks at BetQL!