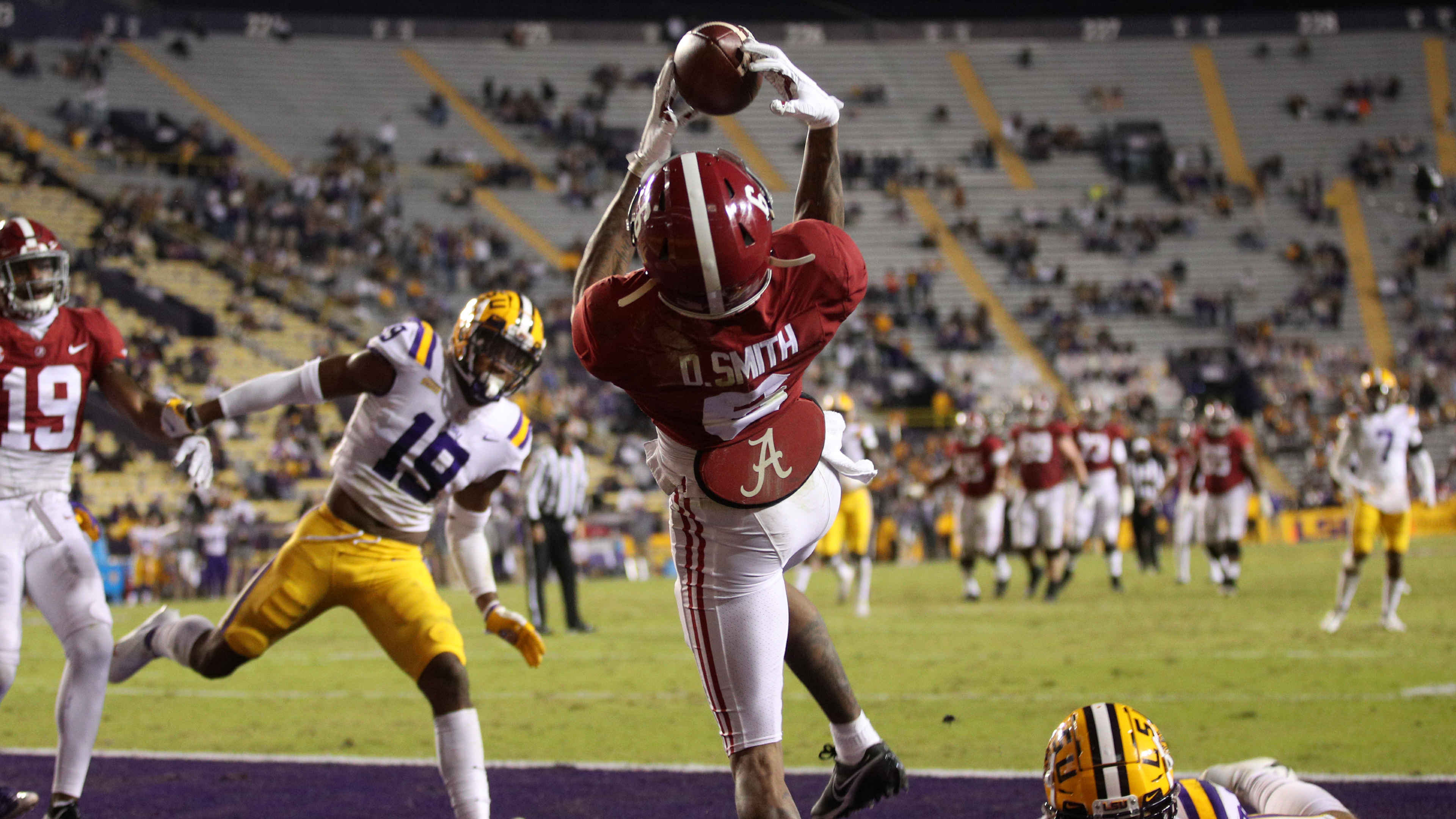 Each of those receivers is in the conversation of best to ever play the position at Alabama. That each of them played under coach Nick Saban is a stark reminder of the quantity and quality of elite players he has coached in Tuscaloosa.

But Saban might not have coached a better one than DeVonta Smith — something for which the Amite, La., native provided an emphatic argument on Saturday.

And he didn’t even meet the mark set for him by Jeudy prior to Saturday’s matchup:

Either way, Smith’s performance should be more than enough to vault him into the Heisman Trophy discussion, even with such talented quarterbacks as Kyle Trask, Justin Fields and Trevor Lawrence still playing. He now has 80 receptions for 1,309 yards and 15 touchdowns this year, with at least two games left to play.

“Smitty obviously is an outstanding player for us,” Saban said of his star receiver after the game. “Just love him as a person and love him as a player, and he’s a great competitor. And I’m sure this means a lot to him.”

The senior displayed everything you could want from the position against the Tigers: Elite hands, elite speed, elite agility, elite vertical — you name it, he had it. He scored on plays of 65 and 61 yards, the latter of which sent LSU coach Ed Orgeron into a rage. But it was a 20-yard score that best showcased his elite skill set.

With the clock winding down toward halftime, quarterback Mac Jones — who’s generating Heisman discussion this season himself — seemingly threw a ball out of the back of the end zone on third-and-10. But Smith created enough space between himself and the defender to leap into the air, stop the ball with one hand and bring it in with two to give Alabama an insurmountable 45-14 lead.

Naturally, Smith isn’t worried about challenging for the Heisman.

“If I’m in the Heisman race, I’m in it,” he said. “I’m not really focused on it. I’m ultimately here to win a championship. That’s the reason I came back.”

Be that as it may, if Smith’s touchdown wasn’t “outstanding” — as dictated by the Heisman’s criteria — then nothing has been in 2020. The same is true for his play all season.

MORE: Playoff Picture after Week 14: Four in and four out

But back to that play: That he pulled the ball in over Derek Stingley Jr., arguably the best cover corner in the country, only adds to its mystique. It’s this kind of display — like Tua Tagovailoa to Jaylen Waddle against Tennessee in 2018 — that creates everlasting legacies.

And he already had second-and-26 as a freshman.

His predecessors at Alabama had legendary battles against LSU defensive backs: Jones had Patrick Peterson; Cooper had Eric Reid; Ridley had Jamal Adams and Tre’Davious White; Jeudy and Ruggs had Greedy Williams and Grant Delpit. To that end, perhaps it’s appropriate the only Louisiana native of the group had the best game against LSU.

So what’s next for Smith? He has a handful of single-season and career records he can chase down, if he cares about them at all. He already has Alabama’s single-game marks for yards (274) and touchdowns (five), both set against Ole Miss in 2019. He has the SEC career record for receiving touchdowns (38), too. He only needs two scores and 419 yards to break Cooper’s single-season records from 2014 (16 touchdowns, 1,727 receiving yards). Smith will have Alabama’s career receiving yardage record — also Cooper’s — with just 46 more.

Then, of course, there’s the hardware: The Biletnikoff Award is an attainable goal, the Heisman Trophy less so. Even then, just getting an invite as a receiver is proof enough of one’s excellence. Curiously, the last receiver to earn that distinction was Cooper. There’s also the question of whether Smith really is the best to ever play the position for the Crimson Tide. As brilliant as he has been all season — over the last four seasons, really — that might be hard to claim definitively.

But it will be hard to refute the argument Smith made Saturday.