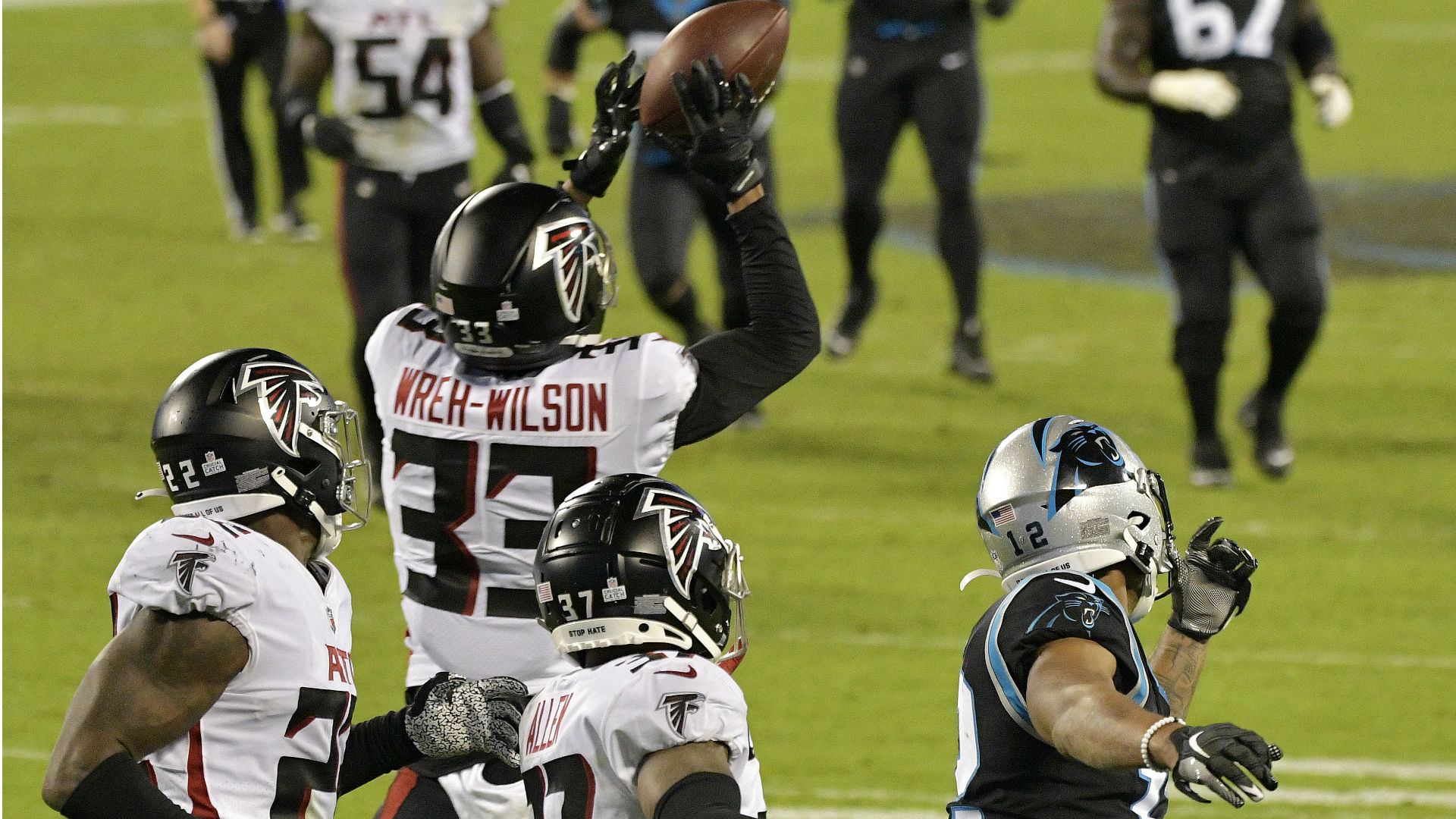 The Falcons finally found a way to hold on to a fourth-quarter lead as they edged the Panthers 25-17 on “Thursday Night Football.”

The key for Atlanta was its defense. After giving up a pair of TDs to Curtis Samuel — a 12-yard rush up the gut and a 29-yard grab on a flea flicker — the dirty birds buckled down and held Carolina to just three points in the second half. The Falcons came up with fourth-down stops on the Panthers’ last possession of the first half and first possession of the second half, and Atlanta’s defense capped off a great night with a latee interception in the red zone by Blidi Wreh-Wilson to seal the game.

Julio Jones was the offensive standout for the Falcons. Carolina kept him out of the end zone, but the wide receiver still hauled in seven catches for 137 yards.

Matt Ryan finished the game completing 21-of-30 passes (70 percent) for 281 yards for Atlanta. He didn’t have any touchdown passes, but he did have a surprise rushing score as he fooled the Carolina defense on a 13-yard scramble into the end zone midway through the third quarter to trim the Falcons’ deficit to 14-13.

Koo hit a 36-yard field goal as time expired at the end of the first half to give Atlanta the 16-14 lead heading into the locker room. Koo went 4-for-4 on field goals, making another in the third quarter to give Atlanta a 19-14 lead.

Todd Gurley got the final score for the Falcons on a 3-yard TD in the fourth quarter. Atlanta then had a chance to make it a two-score game, but Koo missed the PAT, leaving the door open for Carolina.

Unfortunately for the Panthers, their offense lost its rhythm down the stretch, perhaps because Teddy Bridgewater was shaken up on a hit to the head by Charles Harris late in the third quarter. Harris was flagged and ejected for the hit, and Bridgewater momentarily left the game.

The Panthers’ QB had a perfect 158.3 passer rating in the first half, completing 7-of-9 passes for 100 yards and a TD. But in the second half he was only 8-of-14 for 76 yards and an interception. Most of those yards came on Carolina’s final drive, as he was finally able to connect with wideout D.J. Moore for the first time the entire night on 13- and 42-yard completions. But his last throw ended up being his worst of the night as he threw it up for grabs.

The Falcons (2-6) are still at the bottom of the NFC South standings but creep a little bit closer, while the Panthers (3-5) drop their third-straight contest.

Sporting News tracked live scoring updates and highlights from Falcons vs. Panthers on “Thursday Night Football.” Follow below for complete results from the NFL Week 8 game.

11:24 p.m. — INTERCEPTION.  Bridgewater throws it up for grabs and Blidi Wreh-Wilson picks it off. That’ll seal this one.

11:21 p.m. —  HUGE THROW by Bridgewater on a 42-yard completion to D.J. Moore to get Carolina in Atlanta territory.

10:59 p.m. —  Bridgewater comes back in the game but isn’t able to get much going. Joseph Charlton lands a nice punt at the Atlanta 5-yard line, Falcons ball with 8:20 to play.

10:35 p.m. —  Carolina gets a first down on third and seven after a tripping penalty and unnecessary roughness penalty. P.J. Walker comes into the game for Bridgewater, who was hurt on the play.

10:10 p.m. — TURNOVER ON DOWNS.  Close call for Carolina as a Mike Davis fumble is overturned and ruled an incomplete pass. Panthers can’t convert on third and 5 though and are stopped short on fourth down, Atlanta takes over at its 43-yard line, 11:32 left in the third quarter.

9:11 p.m. — TOUCHDOWN, PANTHERS.  Carolina gets creative with the flea-flicker and Bridgewater throws it deep to Samuel for the 29-yard TD. Panthers lead 14-6 with 12:40 left in the first half.

9:08 p.m. — INTERCEPTION, PANTHERS.  Matt Ryan is picked off by Donte Jackson on the first play of the ensuing Atlanta drive. Carolina takes over at Atlanta’s 40-yard line.

9:03 p.m. — END OF 1Q: Panthers 7, Falcons 6.  Bridgewater is sacked on third down to end the quarter. Fourth and 21 at midfield, Carolina will likely punt to start the second quarter.

8:56 p.m. — FIELD GOAL, FALCONS.  Another solid drive for Atlanta, but a sack on third down forces another field goal, this one from 37 yards to make it 7-6 in favor of Carolina with 2:36 left in the first quarter.

8:28 p.m. — FIELD GOAL, FALCONS.  Todd Gurley comes up inches short of the line to gain on third down and Atlanta settles for a 20-yard field goal from Younghoe Koo to take a 3-0 lead with 11:14 left in the first quarter.

Falcons were able to get Julio Jones involved early, with two catches for 52 yards on the opening drive.

8:23 p.m. — We’re live! Matt Ryan leads the Falcons out for the opening possession.

All Thursday night games throughout the 2020 NFL season will start at 8:20 p.m. ET, now with more TV options thanks to the addition of Fox to the broadcast in Week 8.

Below is the complete schedule for Week 8 of the 2020 NFL season.