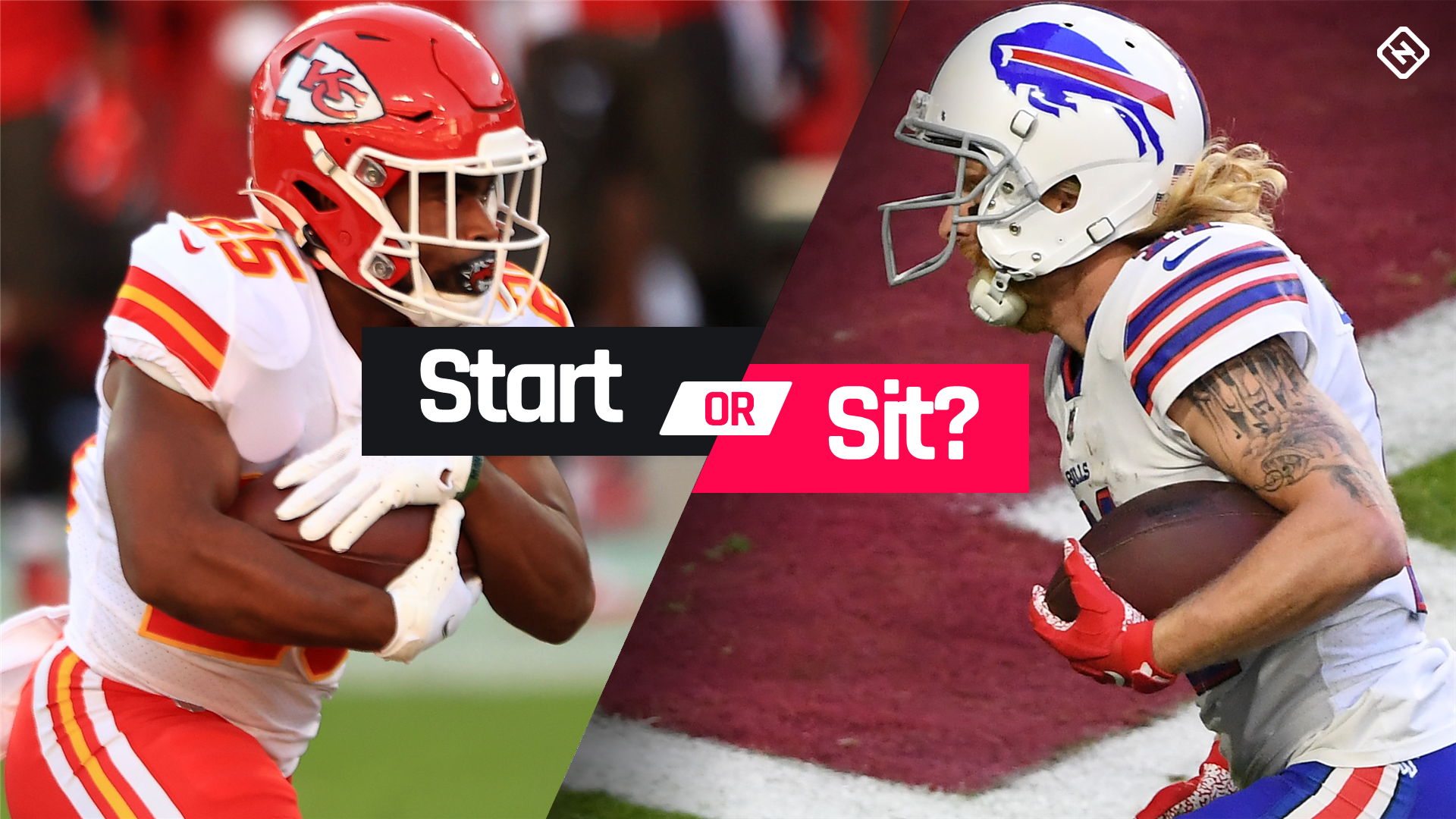 Last week (which technically isn’t over at the time of this publishing) was unlike any other for fantasy football owners, and Week 13 is shaping up to be almost as wacky. With two teams on bye (Buccaneers, Panthers), no game on Thursday, two games on Monday, and a game on Tuesday — plus the usual assortment of COVID, injury, and workload concerns — just finishing the fantasy regular season is going to feel like an accomplishment. But if you’re on the fantasy playoff bubble and have a must-win matchup ahead of you, then you’ll need all the start ’em, sit ’em advice you can find, as lineup decisions are only getting more difficult.

We’re here to help with advice on borderline players who figure to be safe plays, potential sleepers, or probable busts this week. As always, your lineup decisions should be based on all the available options, meaning just because someone below is referred to as a “weak start” doesn’t mean he’s a bad play in all circumstances. Sometimes you need to swing for the fences with a boom-or-bust option, and other times it’s better to play it safe with a high-floor player.

Taysom Hill, Saints (at ATL). Hill had a nice passing game against the Falcons the first time and carries a high floor with his rushing into the rematch.

Ryan Tannehill, Titans (vs. CLE). Tannehill is starting to get hot against because of the running game, and the Browns are weak on the backend after their wilt up front.

Lamar Jackson, Ravens (if he returns, vs. DAL). He should be cleared to return next Tuesday to take advantage of the weak, reeling Cowboys defense as a runner and intermediate passer.

Ben Roethlisberger, Steelers (vs. WAS). He’ll keep throwing in a tough spot with his talented receivers to put the game away.

Ryan Fitzpatrick, Dolphins (vs. CIN). He should get another start over hurting Tua (thumb) and will take advantage of his latest revenge game with a solid 250 yards and two TDs at home.

Philip Rivers, Colts (at HOU). Rivers is throwing more, and the Texans pass defense is bad enough to give him upside in what could be a shootout.

Mitchell Trubisky, Bears (vs. DET, $5,400 on DraftKings, $6,900 on FanDuel). Trubisky dropped a troika despite an ugly return against the Packers. He also led a big comeback in Detroit in Week 1. He will get the job done again to deliver vs. his value with garbage passing.

Carson Wentz, Eagles (at GB, $5,400 on DraftKings, $7,300 on FanDuel). Wentz nearly tripled his value with his two TDs and rushing production in Week 12 and should be tossing often opposite Aaron Rodgers.

Matt Ryan, Falcons (vs. NO). His performance two weeks ago and potential of no Julio Jones (hamstring) makes him tough to trust, and he didn’t do much even in a big home win last week.

Kirk Cousins, Vikings (vs. JAX). This should actually be the high-volume running game that last week should have been against the Panthers, so he might not need to throw for 200 yards to win.

Derek Carr, Raiders (at NYJ). It’s hard to feel good about him on the road again even in this matchup after playing poorly in the best matchup possible.

Jared Goff, Rams (at ARI). You never know what you’re going to get from him, great or awful. It’s best to avoid Goff in a key week, even though he could boom.

Cam Newton, Patriots (at LAC). Newton was terrible against the Cardinals and is completely rushing and TD-dependent now.

Matthew Stafford, Lions (at CHI). The Bears have given up numbers of late to Kirk Cousins and Aaron Rodgers, but they won’t make it three-for-three against NFC North QBs.

Andy Dalton, Cowboys (at BAL). The Ravens are looking worse defensively with injuries, but you still can’t go with him back in prime time on the road against an AFC North opponent.

Clyde Edwards-Helaire, Chiefs (vs. DEN). The Chiefs made it the Mahomes-Cheetah show against the tough Buccaneerss run defense. Game script should favor CEH doing downhill damage.

Kenyan Drake, Cardinals (vs. LAR). The Drake is channeling his late-season mojo from 2019 as the clear lead back in all key situations for a good running team.

Jonathan Taylor or Nyheim Hines, Colts (at HOU). One of them can go off in this brilliant matchup, and if Taylor is off th COVID list, he would be the guy. Then it’s Hines next over Jordan Wilkins.

JK Dobbins, Ravens (vs. DAL). He’ll be motivated with Zeke on the other side, and the Cowboys can’t slow him down.

Damien Harris, Patriots (at LAC). Harris will do some more strong power running, this time with TD paydirt.

Myles Gaskin, Dolphins (if he returns, vs. CIN). He has a good chance to come back and clean up a weekly mess of a backfield with different guys getting hurt.

Frank Gore, Jets (vs. LV). Gore can gash them pretty good with volume as one of New York’s two offensive bright spots at the moment.

James White, Patriots (at LAC). He scored twice last week and is being more involved more with no Rex Burkhead (knee) and shaky receivers. He’s a PPR flex.

Miles Sanders, Eagles (at GB, $6,700 on DraftKings, $7,200 on FanDuel). Sanders was stuffed and didn’t get enough work against the Seahawks. That changes against the Packers, who give up everything to backs. Look for him to go off with 20 touches.

David Montgomery, Bears (vs. DET, $5,500 on DraftKings, $6,200 on FanDuel). Monty got of his season-long slump against those Packers and keeps up the mojo on the Lions’ weak sauce.

Melvin Gordon, Broncos (at KC). Phillip Lindsay (ankle) is hurt, but Royce Freeman isn’t and the matchup can get away with negative game script on the road on Sunday night.

Wayne Gallman Jr., Giants (at SEA). He is getting volume and TDs, but this week he runs into a strong Seahawks front that stops the run so well.

Todd Gurley, Falcons (if he returns, vs. NO). He could return from the knee, but neither him nor Ito Smith is appealing against this run defense even at home.

Benny Snell Jr., Steelers (vs. WAS). He may not be totally the featured guy as a limited power back, and Washington isn’t bad against the run.

Duke Johnson Jr., Texans (vs. IND). The Colts were gashed by Derrick Henry. Duke is no King.

Latavius Murray, Saints (at ATL). Don’t chase the Broncos anomaly. The Falcons also are stout against the power run.

Zack Moss and Devin Singletary, Bills (at SF). They did good combined work against the Chargers, but the 49ers are much better against the run.

Chase Edmonds, Cardinals (vs. LAR). The Drake is pushing him to limited touches of late.

All Rams (at ARI). Cam Akers would be the guy to dice-roll with in a medium matchup.

Brandin Cooks, Texans (vs. IND). He’s the new No. 1 for Deshaun Watson with Will Fuller suspended. Boom. Keke Coutee has sneaky sleeper value now, too.

DJ Chark, Jaguars (if he returns, at MIN). Let’s hope he comes back to do some damage on the Vikings’ cornerbacks.

Jarvis Landry, Browns (at TEN). He got finally revved up by Baker Mayfield last week, and it continues in a good matchup this week.

Sterling Shepard, Giants (at SEA). He should be busy again regardless of QB (likely Colt McCoy) in a good garbage setup.

Corey Davis, Titans (vs. CLE). Davis has been solid more times than not when healthy, and this is another good spot playing off A.J. Brown.

Nelson Agholor, Raiders (at NYJ). Deeper leaguers can take their shots on Hunter Renfrow and Henry Ruggs III, but Agholor gets the consistent targets and should have no problem burning the Jets.

Brandon Aiyuk, 49ers (if he returns, vs. BUF). Deebo Samuel and Aiyuk together on the field are game-changers for the Niners’ offense.

T.Y. Hilton, Colts (at HOU). He found his big-play past again vs. the Titans, and he’s known to be a Texans killer.

Michael Pittman Jr., Colts (at HOU, $4,900 on DraftKings, $5,600 on FanDuel). The Colts will need to throw more than they would like, and he did get nine targets in his two-catch game last week. The rookie and Hilton take advantage of no Bradley Roby.

CeeDee Lamb, Cowboys (vs. BAL). The Ravens are too good in the slot to trust the rookie with Andy Dalton.

Cole Beasley, Bills (at SF). He can do some work in the slot, but this team contained Cooper Kupp and Gabriel Davis may get more looks outside.

Christian Kirk, Cardinals (vs. LAR). Kirk’s hot stretch was a while ago now, as his usage has gone down to early-season levels.

Darius Slayton, Giants (at SEA). He got blanked against the Bengals, marking the second time this season. It’s hard to trust him with McCoy, and the Seahawks’ pass rush will limit big plays.

Jakobi Meyers, Patriots (at LAC). You can’t go here against this secondary after it shut down Stefon Diggs.

Jerry Jeudy, Broncos (at KC). They will have a QB back this week ,but you can’t go here.

Mike Williams, Chargers (vs. NE). He’s too big-play dependent and can be forgotten in the offense again.

Hunter Henry, Chargers (vs. NE). The Patriots can be tough on the position, but he’s getting hot at the right time.

Hayden Hurst, Falcons (vs. NO). If there’s no Julio (hamstring), Hurst will remain busy for Ryan.

Robert Tonyan, Packers (vs. PHI). Tonyan came through on the Bears and does it again for Rodgers in a primo matchup.

Jordan Reed, 49ers (vs. BUF). Reed had plenty more chances to make big plays last week. With the attention on Deebo Samuel and Brandon Aiyuk, he’ll be consistently open as the third target in a good matchup.

Eric Ebron, Steelers (vs. WAS). He should get back on track here in a matchup that screams for Big Ben to hit him in the end zone.

Trey Burton, Colts (at HOU). All he does is score at key times for Rivers, and he’s starting to separate in their committee.

Noah Fant, Broncos (at KC). You can’t go here even with a better QB and chasing Gronk’s game.

Austin Hooper, Browns (at TEN). Hooper is too TD-dependent to trust here against Kevin Byard.

Mike Gesicki, Dolphins (vs. CIN). He was revived with Fitzmagic, but you cannot trust him.

Logan Thomas, Washington (at PIT). He draws the worst possible matchup this week.

Gerald Everett and Tyler Higbee, Rams (at ARI). This committee means nothing to fantasy now even in intriguing spots.

Jimmy Graham, Bears (vs. DET). Trubisky is more partial to the wide receivers.

Bears (vs. DET, $3,100 on DraftKings, $4,200 on FanDuel). Matthew Stafford had an awful game against a weak Texans front. Khalil Mack will pick up where J.J. Watt left off.