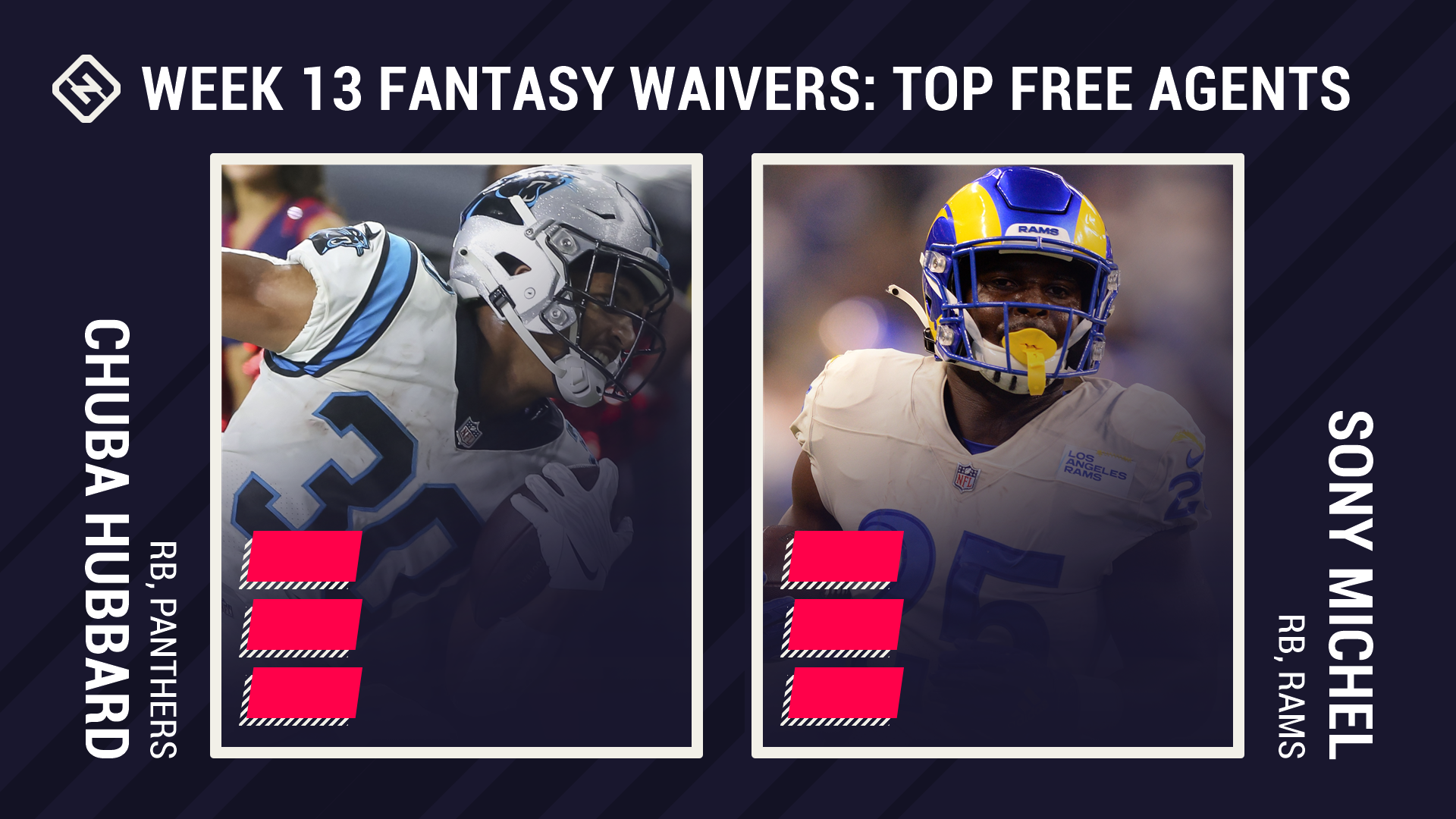 This was the injury-filled week we didn’t even know we were waiting for. As such, there are no shortage of legimate options for the top Week 13 fantasy waiver wire pickups and free agent adds. With up to 12 — yes, 12 — potentially “high-volume” RBs available in over 50 percent of leagues (Chuba Hubbard, Sony Michel, Alexander Mattison, Jamaal Williams, Boston Scott, Tony Jones Jr., Tevin Coleman, Matt Breida, Dontrell Hilliard, D’Onta Foreman, David Johnson, Rex Burkhead), the claims will be flying. On top of those running backs, several interesting QBs and WRs, including Taysom Hill and Curtis Samuel, are sitting on many wires, so there will be plenty of free agents to target after waivers clear around 4-5 a.m. ET on Wednesday mornings in Yahoo and ESPN leagues, too.

Our full free agent list is also packed with plenty of Week 13-specific streamer suggestions at QB, WR, TE, and D/ST (and even an RB). Those streamers can be found at the end of this list. If you love kickers and are looking for one to marry in the offseason, you can check out our Week 13 kicker rankings.

This is absolutely a week where you will see some top waiver claims used. Mattison and Hubbard will almost certainly garner the top two claims, but as we discuss below, Hubbard might be fool’s gold. Either way, both are starting running backs for the foreseeable future, and that carries plenty of currency in the fantasy world. That’s also why Michel, Williams, Coleman, and even Scott could be worth waiver claims this week, too. You might also see claims put in for Hill (though probably not) and one or two of the top WRs.

With so many guys primed for claims, at least in 12-team leagues, that opens the door for those currently with low claims to move up quickly. You might also need/want a running back, but if you’re going to get your fifth choice, you have to ask yourself if you’re better off holding back your claim, jumping to the top of the pecking order, and just picking up someone like Burkhead, who’s getting starter-level touches but has no fantasy heat right now. If you can live with that, hold your claim back and wait for next week’s inevitable injury parade. Definitely hold back claims on QBs, WRs, and TEs, as there are always matchup-based streaming options on the wire.

Bottom line: Do what makes sense for your team and your situation. If this is truly a “must-win week,” then do what it takes. If you’re playing for Weeks 15-17, then adjust accordingly.

Chuba Hubbard, RB, Panthers. With Christian McCaffrey (ankle) out for the year, Hubbard will be one of the top adds this week. When McCaffrey was out from Weeks 4-8, Hubbard averaged 20.4 touches (2.6 receptions) and 83.4 total yards while scoring two total TDs. Those stats obviously aren’t at CMC levels, but they’re solid enough to make him an RB2/flex most weeks. However, his remaining schedule is pretty brutal, with his lone “favorable” matchup coming against Atlanta after Carolina’s Week 13 bye. Hubbard’s fantasy playoff foes include Buffalo, Tampa, and New Orleans — all three of which are among the top-five run defenses. With Ameer Abdullah stealing more snaps and targets, it’s entirely possible Hubbard is fool’s gold the rest of the way, but he still needs to be picked up in all formats given his potential.

Taysom Hill, QB, Saints. We sounded the alarm for Hill last week, but he wasn’t quite ready to start because of some nagging injuries. After another mediocre Trevor Siemian performance, Hill is reportedly taking the first-team reps in Saints’ practice, which is a strong indicator he’ll be under center on Thursday against Dallas. If he starts the rest of the way, he’ll likely be around QB10-15 like he was last year during his starting stint. Hill has a high floor because of his rushing ability, and New Orleans’ creative offense allows him to do just enough as a passer to consistently reach the 20-point plateau. Matchups against the Cowboys, Jets, Bucs, and Dolphins the next four weeks should help him lead some fantasy teams to playoff glory, too.

Matt Breida, RB, Bills. Breida racked up 11 touches for 55 yards and a touchdown against New Orleans in Week 12, and even though he had six fewer touches than Devin Singletary (and his TD came in garbage time), it’s tough to deny that Breida looks like the best back on the Bills roster. Zack Moss was a healthy scratch, so that brightens Breida’s outlook even more. He’s always been explosive and has plenty of upside in one of the NFL’s best offenses. It’s unlikely he’ll be the “lead” back, but his receiving ability will allow him to remain involved regardless of game script. He’ll have a tough road to success with the Pats, Bucs, Panthers, and Pats on deck over the next four games, but he’s still worth adding given his uptick in playing time.

Curtis Samuel, WR, Washington. Samuel did next to nothing on Monday in his return from a nagging groin injury, but the mere fact he’s back should make fantasy owners take notice. With J.D. McKissic hurting, Samuel, who’s operated as a hybrid runner/receiver in the past, could be thrust into a bigger role as soon as next week. At the very least, he should be on watchlists given his upside on an emerging offense.

Sony Michel, RB, Rams. News broke on Monday that Darrell Henderson suffered a quad strain in Week 12, which means Michel might be in line to start in Week 13 against the Jaguars. At this point, it’s tough to know if Henderson will suit up or not, but Henderson has never been a fast healer, so Michel needs to be picked up if he’s available.