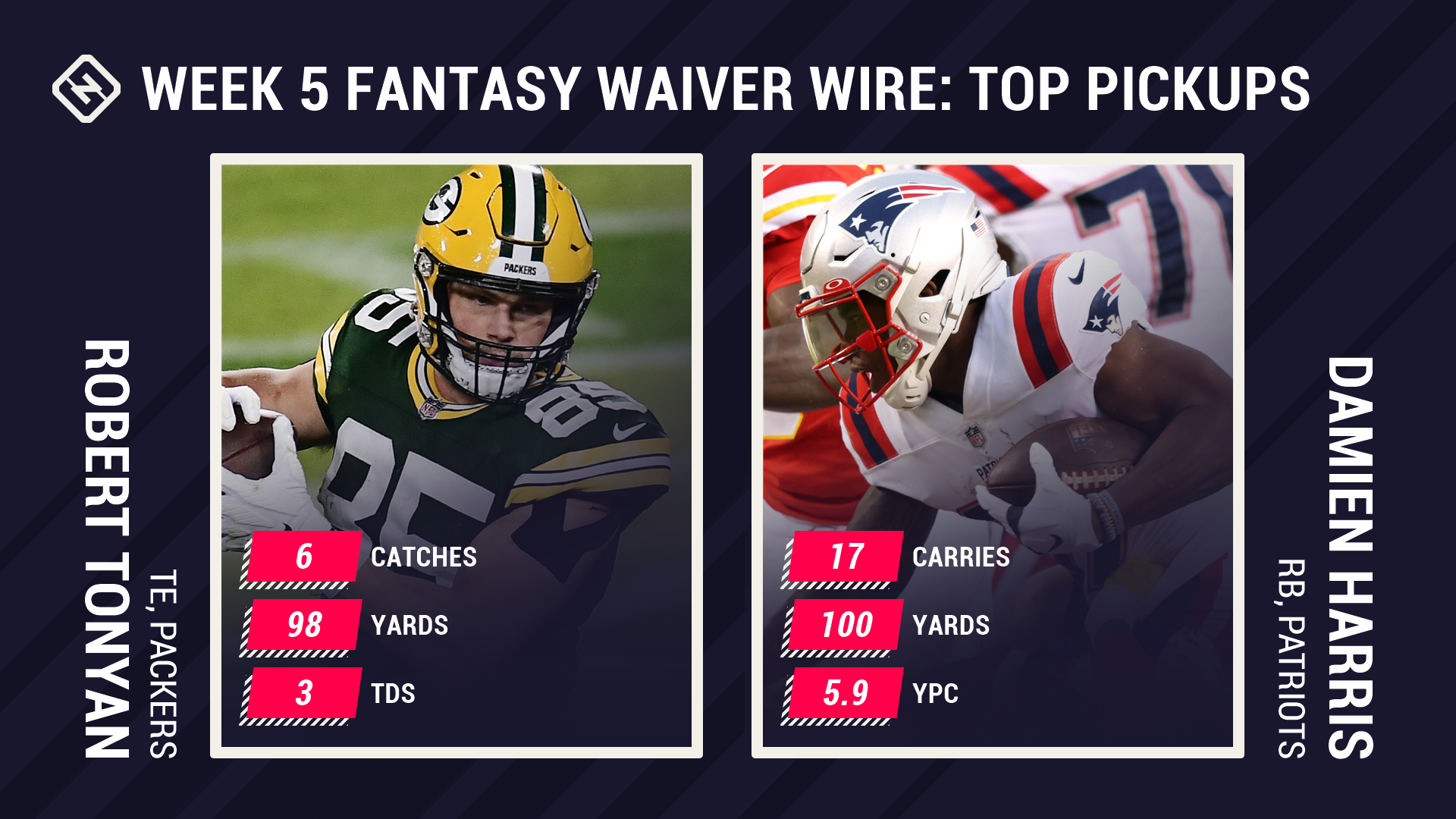 There’s just something about Monday night doubleheaders that leads to fantasy football breakouts, isn’t there? Normally, these doubleheaders happen in the season’s opening week, so it’s not shocking to see surprise performances, but this past week’s double dip treated us to Robert Tonyan​’s career game and Damien Harris‘s coming out party. Both will be among our top Week 5 fantasy waiver wire pickups and free agent adds, but they’re not the only players from the Monday night games who made their marks, as Olamide Zaccheaus, Mecole Hardman, and N’Keal Harry could also be free agent adds after waivers clear around 4-5 a.m. ET on Wednesday morning in ESPN and Yahoo leagues.

Our full free agent list needed some beefing up after a Sunday that featured several big injuries but only a handful of obvious pickups. D’Ernest Johnson, Justin Jackson, and Ke’Shawn Vaughn have flex upside, but they’re still one injury away from really being valuable after Nick Chubb (knee) and Austin Ekeler (hamstring) wound up in the IR and LeSean McCoy (ankle) joined Leonard Fournette (ankle) on the Bucs sideline. Ideally, Joshua Kelley and Phillip Lindsay are available in your league, but there’s about a 50/50 chance that’s not the case. Several WRs (Scotty Miller, Tre’Quan Smith, Tim Patrick) took advantage of injuries to put up good stats, while others (Cole Beasley, Hunter Renfrow, Chrisian Kirk, Tee Higgins) did just enough to keep getting noticed. We also have a bunch of QB, TE, and D/ST streamers at the end of the list. If you’re a Matt Prater or Mason Crosby owner and need a new kicker during their byes — or you want to read an interesting bit of trivia about Stephen Hauschka — you can check out our Week 5 kicker rankings.

After initially looking like a week to save your waiver position, things got more interesting with the long-term diagnoses of Chubb and Ekeler, as well as Tonyan’s and Harris’s Monday night breakouts. If Kelley, Lindsay, and Harris are available in your league, all deserve relatively high waiver claims. You could make a case for Tonyan to get one, too, although, as noted below, Green Bay doesn’t play in Week 5 and Davante Adams (hamstring) is due back in Week 6. That limits Tonyan’s upside. Johnson will probably get waivered, but you shouldn’t use a high claim on him. The same goes for Jackson. None of the WRs deserve a claim unless you’re really in a bind.

Robert Tonyan, TE, Packers. Tonyan made his mark in prime time against the Saints in Week 3, catching five passes for 50 yards and a score, but he really broke out on Monday night against the Falcons in Week 4 by catching all six targets for 98 yards and three TDs. Tonyan has scored five times this season and clearly has a strong rapport with Aaron Rodgers, who will likely continue looking for his 6-5 TE in the red zone. However, before you go using the No. 1 waiver claim on Tonyan, remember: Davante Adams (hamstring) has missed the past two games, and Green Bay has a Week 5 bye. Tonyan is still worth picking up because of his role in the NFL’s No. 1 offense — and he might even be worth using a claim on if you have TE issues — but there are about to be fewer available targets in the Packers offense.

Damien Harris, RB, Patriots. With Sony Michel (quad) out until at least Week 7, Harris got his first chance at extensive playing time on Monday against the Chiefs. He was easily the best thing the Pats had going offensively, rushing 17 times for 100 yards. Rex Burkhead had 11 carries, so this was still somewhat of a committee, but the bruising second-year back from Alabama should continue to lead the way. Not all matchups will be this favorable, but the Pats rushing attack will also be more dynamic once Cam Newton (COVID) returns. Michel is no sure thing to reclaim his role when he comes off IR, so even though Patriots RBs are usually a headache, Harris has as good of a chance as anyone on this week’s waiver wire to help you well into the future.

Olamide Zaccheaus, WR, Falcons. Julio Jones didn’t play in the second half Monday night after aggravating his hamstring injury, and it seems likely that the 0-4 Falcons will give him as many games as he needs to heal this time around. That opens the door for Zaccheaus to slide into the starting lineup for the team that has attempted the third-most passes this season. At 5-8, 193 pounds, Zaccheaus is certainly not built like Jones, but he hauled in eight-of-nine targets for 86 yards on Monday night (all team highs), so he can produce. Zaccheaus is worth stashing, especially for favorable matchups in Weeks 6 and 7 (@ Vikings, vs. Lions).

Mecole Hardman, WR, Chiefs. Hardman produced on Monday night for a second straight week, this time catching all four of his targets for 27 yards and a TD. Fantasy owners are looking for more yards and big plays, but Hardman still gets his fair share of chances and is always a candidate for a breakout game. He’s not someone you need to use a waiver claim on, but with the byes here, he’s the type of boom-or-bust receiver who’s nice to have on your bench. Kansas City’s upcoming schedule (vs. Raiders, @ Bills, @ Broncos, vs. Jets) is a favorable one, too.

N’Keal Harry, WR, Patriots. Harry caught just three-of-six targets for 21 yards and a score against the Chiefs — hardly anything to get overly excited about but enough to support the idea that he should be on fantasy benches The 6-4, 225-pound second-year receiver has averaged seven targets per game and could easily wind up being Cam Newton’s favorite receiver when he returns. Next week brings a favorable matchup against a beat-up Broncos defense, so even if Newton is still out, Harry has some streaming potential. Damaire Byrd, who caught five-of-10 targets for 80 yards on Monday night, should also be on PPR radars.