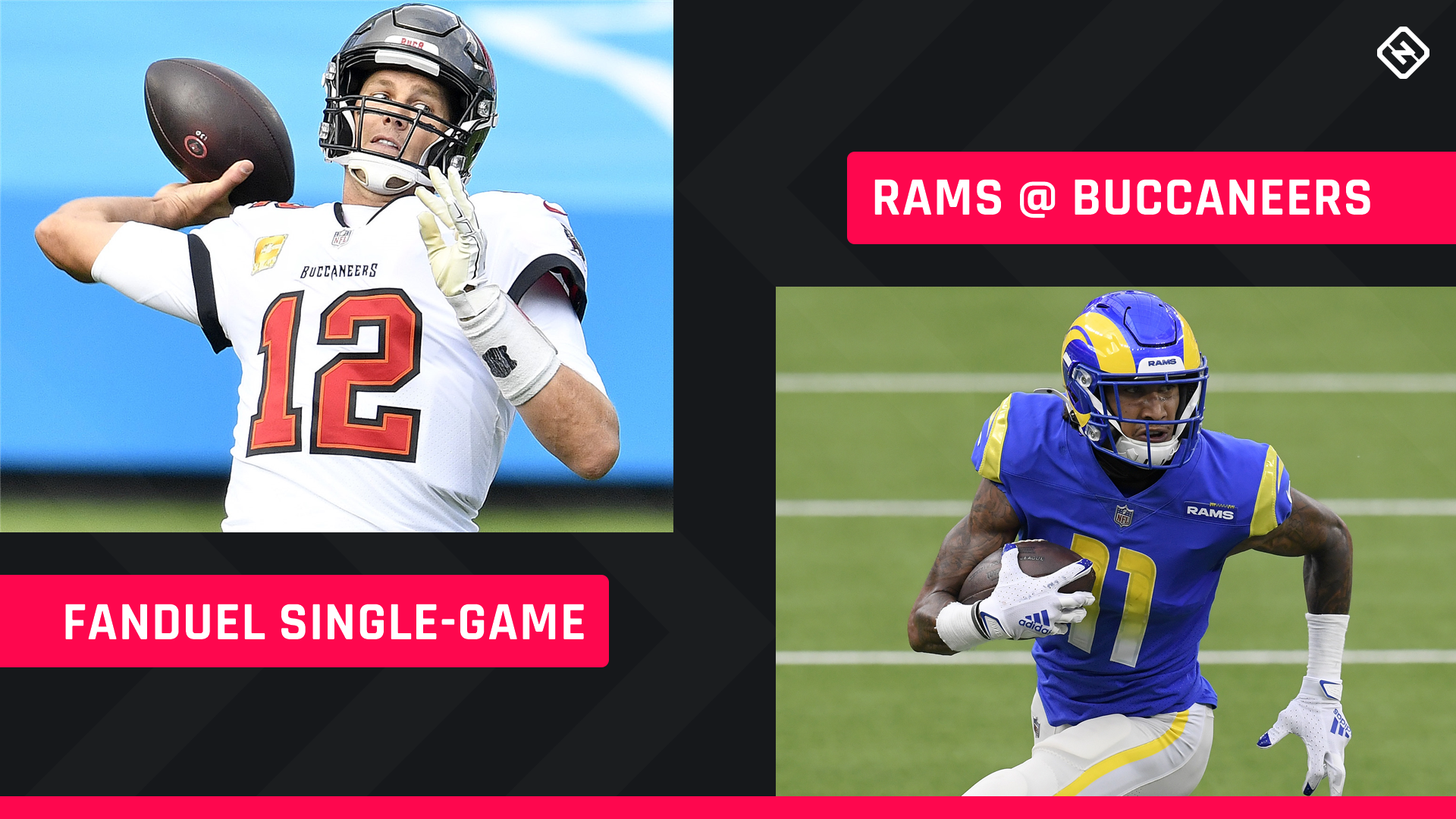 The Buccaneers and the Rams will face off in a great Monday Night Football matchup to close Week 11. Both teams are still jockeying for position in their division with the Bucs (7-3) sitting a game back of the 8-2 Saints. The Rams (6-3) are a half-game back of the 7-3 Seahawks for the NFC West lead. Beyond that, both teams are jockeying for wild card positioning, so this contest will mean a lot to both clubs as they look to position themselves for postseason runs. That’s music to the ears of NFL DFS owners, as both teams will bring their A-game in this matchup, and that’s why our FanDuel single-game lineup is using a balanced approach this week.

Crafting a lineup for this game wasn’t easy. Both teams have very strong defenses, but FanDuel’s single-game contests don’t have D/ST units as an option to play. That made it difficult to find many matchup advantages. As a result, we decided to go a bit more contrarian than normal in our MVP spot, as one big play could prove to be the difference in this contest. That led to us leaving $1,500 in salary space available since we targeted some lower-cost players. We’re also avoiding the Rams three-headed RB committee against a Bucs run defense that has allowed a league-low 547 rushing yards to the position and tends to only allow fantasy points via TDs.

Though both the Rams and Bucs have good offenses, choosing an MVP wasn’t difficult because each team also sports a great defense that could pose matchup problems. The safe pick here would’ve been Tom Brady, but we’re going with a contrarian play in hopes that it pays off. Brown has played in just two games for the Bucs and has exactly 10 total catches for 100 yards. That said, he has a strong rapport with Brady and saw eight targets against the Panthers last week. As he works his way into the offense more and more, Brown should emerge as a big-time contributor. That will afford him a chance to have some strong games, and with Jalen Ramsey likely locking up either Mike Evans or Chris Godwin on Monday, Brown should see plenty of targets and may reach the end zone for the first time in a Bucs uniform.

So far this season, the Bucs have played in three prime-time games. In those contests, Brady has thrown just three TDs and led the Bucs to a 1-2 record. In another national TV appearance, he’ll want to play better, and the Bucs will need him to against the Rams. So far this season, Los Angeles is allowing just 15.1 FanDuel points per game (FD PPG) to QBs. That includes a league-low nine passing TDs. Though this matchup will be tough for Brady, he has five games with three or more TDs on the season, and in three of those contests, he has posted at least four scores. Brady is the highest-priced player on this slate, so he will be highly owned, but we need him in our lineup because of his ceiling. When he’s on, he can post 30-plus FanDuel points, just like he did last week against the Panthers (31.84). We’ll bank on him having a big game.

Woods is a classic high-floor player, which is  ritical for this lineup. Woods has seen at least five targets in every game this season and is averaging 6.7 per contest in total. He also gets about two rushing attempts per game, so he should have a chance to have the ball in his hands eight-to-12 times. The Buccaneers have allowed the seventh-fewest yards to WRs this year (1,481), but if the Rams focus on passing the ball, which they’ll need to do against this vaunted Tampa Bay run defense, Woods should see plenty of work.

Jones has four 100-yard games on the ground this season, including one he had last week in which he totaled 192 yards and a score. The Rams have a very strong run defense that has only allowed five total TDs on the season (tied for the fewest in the league), but the Buccaneers will still want to run the ball early and often. They saw what happened when they abandoned the run against the Saints, and it wasn’t pretty. Jones is another high-floor player thanks to his touches, and if he can break another long run or find the end zone, he should pay off this mid-tier price tag.

In his past four games, Reynolds has averaged eight targets per game, 4.5 catches, and 58.8 receiving yards while bringing in two TD catches. He has established himself as the No. 3 receiving option in the Rams offense. Reynolds should continue to see opportunities for the Rams as they’ll need to throw a lot to move the ball, and he could come close to his eight-catch, 94-yard line from last week if the Bucs are more preoccupied defending Woods and Cooper Kupp. Either way, getting a player that has surpassed 11.5 FD points in three of his past four games seems like a good value here.