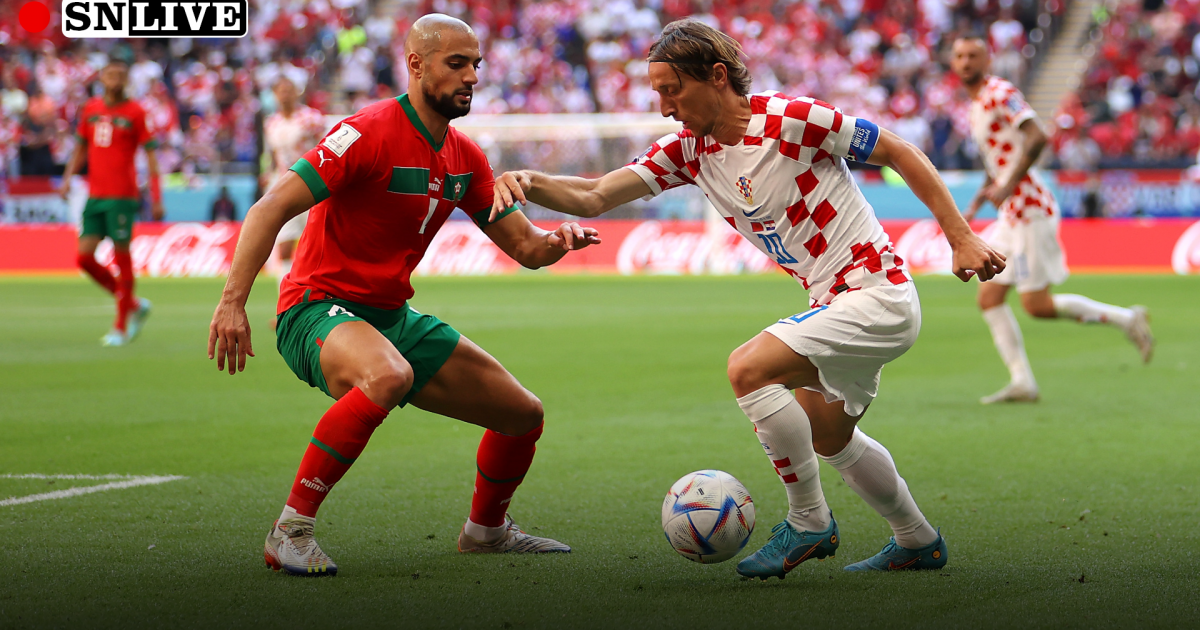 Croatia open their 2022 World Cup campaign against Morocco as Luka Modric and Co. look to improve on their World Cup final appearance four years ago.

With Canada and world No.2 side Belgium also in Group F, both sides will be looking for a huge three points in the opener to boost their chances of progressing with the Red Devils expected to top the group.

Croatia begin the 2022 World Cup in solid form, losing just one of their last 17 internationals (W11, D5 – including friendlies).

As for Morocco, they have previously qualified for five World Cups but have only managed to get out of their group on one occasion.

The Sporting News is tracking live scoring updates and highlights for Morocco vs. Croatia at the 2022 World Cup. Follow below for complete results from the Group F match in Qatar.

61st min: Dangerous moment for Croatia as Achraf Hakimi gets to the byline again and sends in a wicked cross that somehow manages to elude everyone in the penalty area.

59th min: Noussair Mazraoui has been hobbling for the lats few minutes and the Morocco fullback is not going to continue. Yahia Attiat Allah will replace him.

54th min: Morocco keeper Yassine Bono is brave there, throwing himself in amongst the studs to beat the ball away in a crowded penalty area.

52nd min: Croatia, who have been hemmed in by Morocco’s high press, break out and the marauding Josip Juranovic stands up a lovely cross to the far post that almost finds Ivan Perisic.

51st min: Morocco’s Soufiane Boufal is screaming for a penalty. Has his shot hit a Croatia player on the hand as he turned his back on it? The referee is not going to look at it anyway, so on we go.

50th min: Chance for Morocco as fullback Noussair Mazraoui gets a low diving header in at the far post that Croatia keeper Domink Livakovic beats away.

47th min: Mario Pasalic is on for Croatia by the way, taking over from Nikola Vlasic on the right flank.

46th min: We’re all ready to go again but hang on, Morocco are missing a player! Sofyan Amrabat sheepishly emerges from the dressing room to join the action.

Apart from that late flurry from Croatia, there were few moments to set the pulse racing in that opening half.

Morocco’s only real chance saw Youssef En-Nesyri unable to get his head on a Hakim Ziyech cross, while a rising long-range effort from Ivan Perisic was the closest Croatia came until those two late chances for Nikola Vlasic and Luka Modric. Let’s hope for better after the break.

45th min+2: The half ends with another Croatia chance as Luka Modric follows up a blocked shot from Nikola Vlasic with a rising left-foot drive that heads narrowly over.

Watch if you’re in the USA:

Luka Modrić is going to want that one back 👀

He sends Croatia’s best chance of the first half over the crossbar pic.twitter.com/dzoE4cllJ5

45th min: Some belated action in the Morocco penalty area as Ivan Perisic and Borna Sosa combine and Nikola Vlasic gets a shot in from close range that forces a good save from Yassine Bono.

40th min: Achraf Hakimi attempts a one-two on the edge of the Croatia penalty area but Azzedine Ounahi’s control lets him down. Morocco do have a free-kick in a dangerous position but again, Hakim Ziyech fails to clear the first defender.

33rd min: Croatia’s midfield trio of Luka Modric, Mateo Kovacic and Marcelo Brozovic have 316 international caps between them and their instinctive understanding and awareness of where each other is on the pitch is very apparent. But Morocco keeping them largely in check so far.

27th min: Fair to say Morocco have the majority of the support inside the stadium.

Watch if you’re in the USA:

23rd min: Morocco looking the more likely side just now, but no real clear-cut chances yet. Dejan Lovren makes a vital block as Youssef En-Nesyri attempts to get a shot away.

20th min: Free-kick to Morocco in a central position on the edge of the Croatia penalty area. But Hakim Ziyech can only find the wall with his left-foot effort.

18th min: Chance for Morocco after a lovely ball in from Hakim Ziyech, but Youssef En-Nesyri can’t get his head to it, right in front of goal.

16th min: Poor pass from Selim Amallah straight into the path of Ivan Perisic, who takes aim from long range but his left-foot effort is always drifting narrowly over.

Watch if you’re in Canada:

Ivan Perišić had a go from distance and it just went over the bar. Still 0-0 in this one!#FIFAWorldCup pic.twitter.com/oCYRtTYQKt

12th min: First sign of the attacking talents of Morocco fullback Achraf Hakimi. The PSG defender beats his man down the right flank and gets a decent ball in, but it deflects off a defender into the arms of Croatia keeper Domink Livakovic. Better from the Atlas Lions though.

6th min: Morocco’s Romain Saiss has to be alert to step in ahead of Andrej Kramaric and concede a corner. Luka Modric finds the head of Josko Gvardiol from the set-piece, but Morocco get it clear.

4th min: Plenty of whistles from the vociferous Moroccan contingent in the crowd as Croatia try to build patiently from the back in these early stages. And cheers as Ivan Perisic puts the ball straight into touch.

1st min: Morocco kick off, looking for their first win at a World Cup since 1998.

5mins from kickoff: The Al Bayt Stadium is bathed in bright sunshine as the teams line up for the anthems. We’ll be underway very shortly…

10mins from kickoff: Croatia, finalists in 2018 and ranked 12th in the world, start favourites for this encounter. They have played African opposition twice before in World Cups, beating Cameroon 4-0 in 2014 and Nigeria 2-0 in 2018.

This will be Morocco’s 17th World Cup finals match, having reached five previous tournaments. They have just two wins to their name, with five draws and nine defeats. The Atlas Lions finished bottom of their group four years ago, losing 1-0 to both Iran and Portugal before a 2-2 draw with Spain.

20mins from kickoff: Plenty of Morocco supporters in the house. And they’re promising to make some noise!

Get ready – today you will witness the best atmosphere inside a World Cup stadium so far this tournament. #TeamMorocco pic.twitter.com/MK79MVgLM8

30 mins from kickoff: This opening Group F encounter is taking place at the Al Bayt Stadium, in the municipality of Al Khor. It is this World Cup’s second largest stadium with a capacity of around 60,000, and hosted the tournament’s opening match between hosts Qatar and Ecuador. It will also stage England v USA on Friday, November 25 amongst several group games, as well as a round of 16, quarterfinal and semifinal match.

50 mins from kickoff: And now we have the Morocco team. Sevilla’s Youssef En-Nesyri is fit and starts up front, alongside Chelsea’s Hakim Ziyech and Soufiane Boufal, who plays with Angers in France.

1hr from kickoff:  The Croatia team is out. Josip Juranovic, Borna Sosa and Josko Gvardiol all start in defence alongside Dejan Lovren while Inter Milan’s Marcelo Brozovic is midfield alongside Luka Modric and Mateo Kovacic.

Here is your #Croatia starting lineup for the Morocco encounter at the #FIFAWorldCup in Qatar! 🥁🤩 #MARCRO#Family ❤️‍🔥 #Vatreni #Qatar2022 pic.twitter.com/x9TdQcHeAY

1.5 hrs from kickoff: With Belgium expected to top the group, Morocco and Croatia know a win today will go a long way in their hopes of progressing from the group stage.

We’ve looked at the odds to see how the bookmakers rate Morocco and Croatia’s chances of advancing.

2 hrs from kickoff: We’re just two hours away from the first ever competitive match between Croatia and Morocco.

Concerns for Croatia arise with the question of where their goals will come from. In their stunning performance in 2018, Mario Mandžukić and Ivan Perišić shared the title of Croatia’s top goal scorer with three each.

The former has since retired from the national team, and Perišić, whilst still expected to play a crucial role for Croatia, is now 33 and has taken on a slightly more defensive role in his time at Tottenham Hotspur. Although, seniority isn’t proving much of an obstacle for a certain Croatian teammate of his.

Morocco are also stronger elsewhere than in front of goal, with their star players more suited to roles in midfield and defence.

They will rely on 31 year-old Hamdallah, who’s bagged four goals in six games for Al-Ittihad in the Saudi Professional League.

2.5 hrs from kickoff: Getting closer!

Ziyech and Modric in particular can be a pleasure to watch, will we see one of these delightful moments from either of them tonight?

This will never get old 🥰🥰🥰#UCL | @AFCAjax pic.twitter.com/ARbtpBj1fV

Two players have come out of international retirement to compete for Morocco at their second consecutive World Cup finals.

Ziyech and Abderrazak Hamdallah have both returned to the Moroccan football setup after each announcing their retirement. Bayern Munich Defender Noussair Mazraoui, alongside Ziyech, refused to play for former coach Vahid Halohodžić but accepted the request to play after the appointment of Walid Regragui.

Will a refined relationship between playing group and head coach bring success to Morocco?

3.5 hrs from kickoff: We know who Croatia’s main man is, but who are the likely game-changers for Morocco?

Achraf Hakimi is perhaps the biggest name on the team sheet for the 22nd ranked nation. He has contributed to four goals for Paris Saint-Germain since his AUD $90 million switch from Inter in 2021. Chelsea’s Hakim Ziyech is another high-profile name in the squad.

Sofiane Boufal and captain Romain Saiss will be familiar names to Premier League viewers, playing for Southampton and Wolverhampton Wanderers respectively before leaving for elsewhere in Europe.

🇲🇦 Aware of the challenge that lies ahead

4 hrs from kickoff: Just four hours until the player of the tournament in Russia 2018 takes to the field.

World Cups provide a platform for a true talisman to lead his national side throughout the tournament. Can Croatia’s golden boy pilot them to the latter stages in Qatar?

🇭🇷 Can Luka Modrić take his nation one step further in #Qatar2022?

4.5 hrs from kickoff: As kickoff nears closer we look at the form of each side coming into their opening match of Qatar 2022.

A win for Modric’s men would take Croatia’s current winning streak to six. You couldn’t ask for much better form coming into a World Cup.

Morocco are in decent shape themselves, unbeaten in their last five matches including wins over Chile and South Africa.

Who will carry their form onto the biggest stage?

Everything you need to know about the Group F teams here! 👇

5 hrs from kickoff: Hello, and welcome to The Sporting News’ live coverage of the Group F opener between Morocco and Croatia. All eyes will be on whether Morocco can cause an upset against Luka Modric and Co. Let’s get going!

Morocco will be without the likes of Ez Abde, Tarik Tissoudali and Amine Harit for this match due to injury but Youssef En-Nesyri is fit again and he starts up front, with Hakim Ziyech in support. They used a 3-4-3 last time out but may opt for a more defensive system today.

Croatia have been spared any injury blows to date with both Marcelo Brozovic and Domagoj Vida able to shake off concerns. Brozovic starts alongside Luka Modric and Mateo Kovacic in midfield.

Here’s how you can watch all the action in the major global territories.

Watch the match on fuboTV in USA