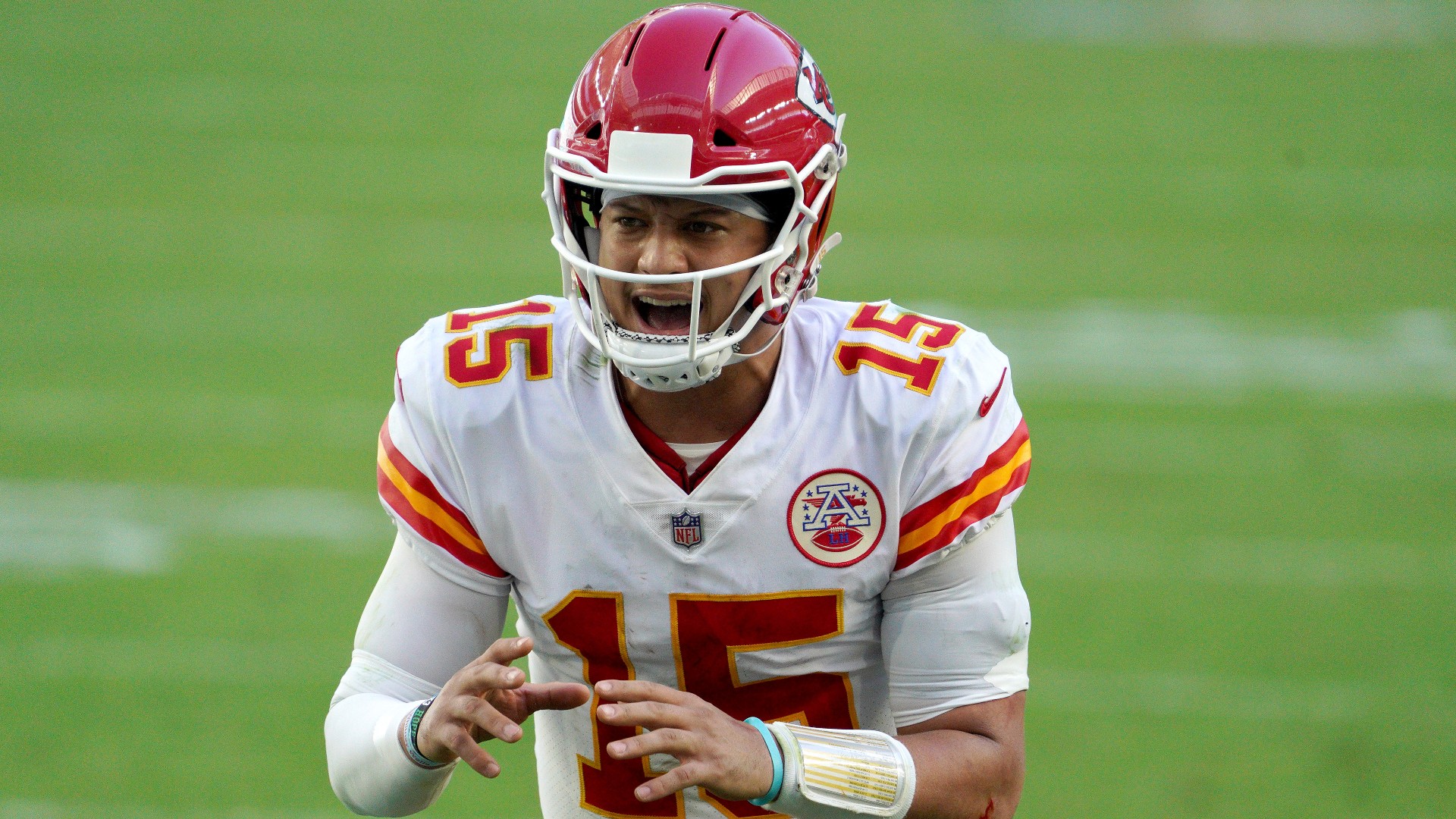 Even if the Chiefs ran a vanilla offense, Patrick Mahomes would make it tough to stop. His ability to freelance and make throws that no one else can — that’s difficult for opposing defenses to handle all by itself.

But Kansas City’s offense is also one of the most creative in football. Andy Reid and Eric Bieniemy utilize motion, unusual formations and Mahomes’ unique passing talents to put together what amount to risk-free trick plays. They get speedsters Tyreek Hill and Mecole Hardman into plenty of space to operate. They free up all-world tight end Travis Kelce. Best of all, they let Mahomes simply be Mahomes.

Put it all together and the Chiefs are a win away from repeating as Super Bowl champions. They’ll have to beat a solid Buccaneers defense to do so, but they already did that once this season. With a deep bag of tricks, Tampa Bay won’t ever feel comfortable when Kansas City’s on the field.

“We’re just trying to be creative; we’re trying to have fun out there, enjoy it day in and day out,” Mahomes told the Kansas City Star on Dec. 8. “And Coach Reid lets us be creative by putting in plays like that. So obviously we try to execute the basics and the base plays as much as possible, and then when we get our opportunity, we try to execute those trick plays so he’ll call them more often.”

And maybe most scary for the Buccaneers is this: There’s no telling when Mahomes, Reid, Bieniemy and the Chiefs have one more trick up their sleeves.

While we can’t predict the new trick play, we can break down the ones the Chiefs have already used to show just how difficult they can be for an opposing defense to stop.

“This is a serious business. We’re grinding away. There’s a lot of hours put in. So we’re trying to give the guys something,” Reid said in December. “Now you want it to be a good play. We’re not making a mockery of the thing. We’re trying to make it to where it’s another opportunity to score a touchdown.”

There’s something in common with a lot of the Chiefs’ trick plays — they break them out most frequently in the red zone. As the field shrinks, the defense has less ground to cover, making the gain of yardage tougher. So Kansas City looks for newfound ways to create an advantage.

“We try to have fun with it the best we can, and everybody contributes,” Reid said Thursday when asked about the Chiefs’ red zone offense. “I’ve got some really good coaches, assistant coaches — you guys know that. I’ve got players that have chipped in on plays. They have a blast with it. So I’ve always encouraged that throughout my career and I don’t want to stop because I’m old. I want to keep that going and try to do it a little bit better, so that’s what we do. We try to stay creative and try to have some fun with it.”

One of the most effective for the Chiefs is the underhand, or shovel, pass. The end result is usually a tight end for Travis Kelce or one of the other interior pass-catchers for Kansas City (they’ve even gotten fullback Anthony Sherman involved in this act before). But that’s just the end of the play, which requires deception from the Chiefs’ fastest wideouts.

Kansas City broke out this play on first-and-goal against the Bills in the AFC title game. Hill flies in motion across the formation going left, shifting the defense in that direction. Then running back Darrel Williams sprints out to the right flat, and Mahomes runs that way upon receiving the snap. The defense has been pulled wide in both directions. Waiting in the middle of the formation is Kelce, who Mahomes can find with a simple underhanded toss.

Earlier in the season, the Chiefs used a similar roll-out to the right from Mahomes, this time with Hill sprinting on his motion to that same side, making him a very obvious target. Kelce aligned on the opposite side of the line, but again he could pretty much pivot to the middle of the field and be wide open.

The Chiefs aren’t exclusive with Mahomes throwing this shovel pass, either. On a play where Mahomes went in motion (which we’ll breakdown more below), Kelce got to throw a shovel pass to Byron Pringle. All the concepts are the same, aside from the defense now having to account for a totally different player than expected having the football in his hands.

“They do two things,” CBS color commnetator Tony Romo said during the AFC title game. “They motion people, and they end up going to the flat. Or they do that, and then go right to the middle.”

The pop pass has taken on major popularity in the NFL in recent years, and the Chiefs use it as well as anyone.

It starts with jet sweep motion, one of the receivers flashing in motion across the formation in front of the quarterback, who’s lined up in shotgun. The key to the play is the exchange between QB and WR. Instead of handing the ball off, which could result in a fumble if it’s mismanaged, the quarterback flips the ball in the air gently to the receiver, who catches it. This way, if the ball is dropped, it’s an incomplete forward pass and the play is dead.

Kansas City has two of the most dangerous weapons for this play in Hill and Hardman, two of the fastest wideouts in the NFL. Running jet motion and a pop pass gives them a running start against a defense that can only hope to get to the outside and contain them.

The Chiefs often run their pop pass plays with a running back faking the other direction, so it almost works like a play-action handoff one way before the sprinting receiver catches the ball going the other way. On this October version of the play, Mecole Hardman goes right for a touchdown while Clyde Edwards-Helaire fakes a run to the left.

Once again, yes, that is a passing TD 🤷‍♂️ pic.twitter.com/OHQ4rE4aCN

And in November against the Jets, Le’Veon Bell faked right while Mahomes tossed the ball to Hardman going left for another score.

The pop pass is basically a fool-proof way to let their dynamic receivers run the football, and it even gets Mahomes cheap passing stats in the process. While the other plays on this list are used less frequently, it’d be no surprise to see even multiple pop pass plays run during Super Bowl 55.

MORE: How fast is Tyreek Hill?

The Chiefs don’t leave anyone out when it comes to sending players in motion. Even Mahomes gets in on the act.

You saw the play above where Mahomes was used as a decoy before a Kelce shovel pass, but Kansas City used a different variety of the play early in the season. That time, Mahomes caught the ball while on the move left before swiveling back to his right to throw a touchdown.

The Mahomes motion can create the misdirection the Chiefs’ offense craves in one more way than most playbooks would consider.

“I had to start throwing little hints to coach Reid that we needed to try it out,” Mahomes said to media in Week 9. “It finally got in and it worked out well.”

The Chiefs almost had the Mahomes motion result in a touchdown against the Buccaneers this season, too, but Kelce and Mahomes couldn’t connect when the tight end tried to throw it to the quarterback. Kansas City threw in a Tyreek Hill reverse action, too, just to really mess with the defense.

Kelce was a quarterback in high school in Cleveland Heights, Ohio. The Chiefs have a pretty good player at that position, so Kelce can mostly focus on his pass-catching duties.

Occasionally, though, the 6-5, 260 pound tight end gets the snap himself. Kansas City doesn’t run a lot of Wildcat, where a pass-catcher takes the snap instead of the quarterback, but Kelce is often the choice when KC pulls it out.

While defenses aren’t necessarily expecting Kelce to throw, he’s still a tough runner to stop in short-yardage situations. Kelce’s got a similar body type to Cam Newton, and on a 2019 read option, the defenders didn’t stand a chance.

The two most accessible clips of Kelce working in the Wildcat both came against Tom Brady and the Patriots, so maybe it’ll show up again in Super Bowl 55 against Brady and the Buccaneers. It didn’t work as well in 2017, but that appeared to be more of a blocking issue than anything Kelce did wrong.

That Kelce shovel pass earlier in the season also came out of a manufactured Wildcat setup. It didn’t look like Kelce would play quarterback, but the Mahomes motion turned him into the QB for a play. The Chiefs are so good at their trick plays that they’ve started combining them, which should definitely scare opposing defenses.

The Chiefs should probably not try to replicate this one, but it’s worth noting that they’ve attempted a Sammy Watkins pass this season.

Watkins, a wide receiver, ended up throwing a tough pass toward Mahomes that ended up intercepted. But look at all the actions on this play.

Mahomes lines up off center slightly, and the shotgun snap goes to running back Darrel Williams. He hands to Mahomes, who immediately turns and pitches to Watkins going right. Mahomes then leaks out to the left in the hopes of being wide open, but the Falcons weren’t overly fooled, despite that being Watkins’ first career pass.

If the Chiefs are going to try this again, maybe it should be with high-school quarterback Kelce as the passer. It wouldn’t be impossible to see that snap to a running back followed by a handoff to Mahomes again, although Kansas City may opt to keep the ball in the Super Bowl 54 MVP’s hands, too.