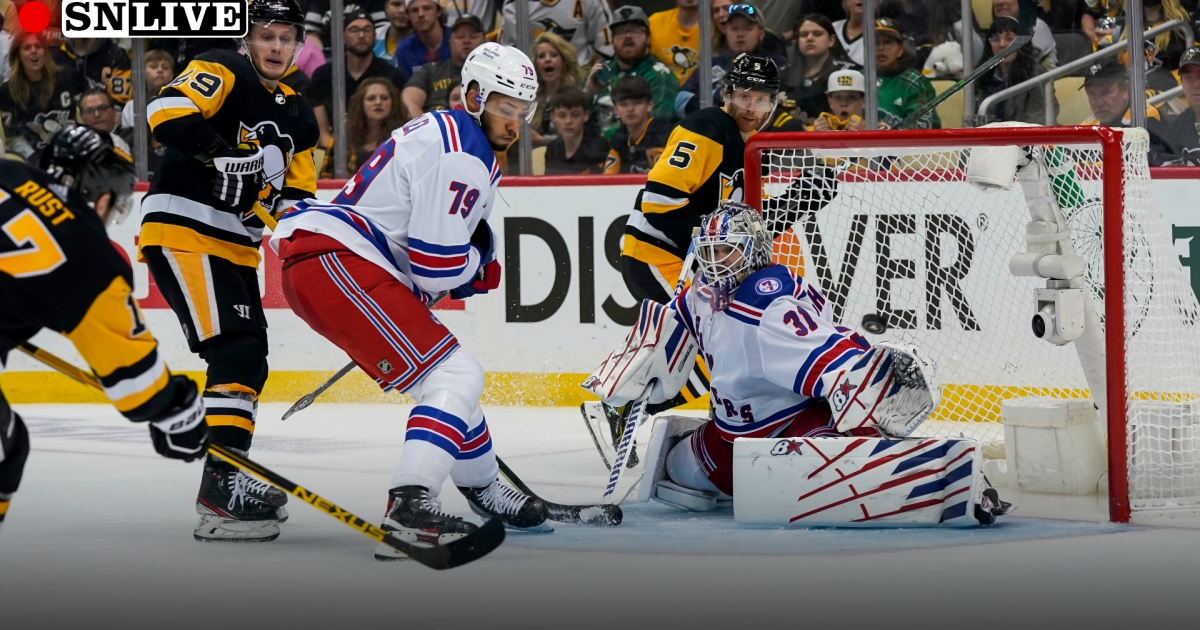 The final day of the first round of the 2022 Stanley Cup playoffs is here, with the Rangers and Penguins needing to go the full seven games to determine who is advancing to the second round.

The Penguins led 3-1 after the first four games, however they blew 2-0 leads in both Games 5 and 6, resulting in 5-3 victories for the Rangers in both contests and evening the series 3-3.

Both clubs are eyeing a win and a date with the Hurricanes.

The Sporting News will provide you with updates and highlights throughout the game.

9:44 p.m.: Sixty minutes is not enough. We are headed to overtime. One goal is all that’s needed to decide this series.

9:33 p.m.: GOAL! Zibanejad comes through again for the Rangers, ripping a shot by Jarry’s left ear. He caused the initial turnover in the offensive zone, got himself out in front of the net and had enough space to fire the shot by Jarry. 5:45 left in the third.

9:25 p.m.: Shorthanded breakaway for Tyler Motte, but the five-hole attempted is turned aside. Down on the other end, Crosby is denied by Shesterkin on a shot from down low.

9:24 p.m.: Panarin gets his stick up on Letang and it’ll be a two-minute minor for high-sticking. Penguins to the power play again, are 2-for-4 so far in the game.

9:18 p.m.: More than five minutes in before the Rangers get their first shot on goal, but it’s a smooth glove save by Jarry.

The official word from the NHL on the 2nd period Jake Guentzel goal:

“Video review confirmed that Jake Guentzel’s stick was at or below the height of the crossbar when he directed the puck into the Rangers net.”@penguins @NYRangers #Game7

8:50 p.m.: Buzzer blows and it’s the end of the second period. Penguins have the lead, outshooting the Rangers 29-19.

8:47 p.m.: GOAL! Evan Rodrigues steals the puck at the blue line for a breakaway, fights off a back check from Miller and backhands it past Shesterkin. It comes just as the Rust penalty expires, so does not count as a shorthanded goal. 3-2 Penguins with under three minutes to go in the second.

8:43 p.m.: Scramble in front of the Pittsburgh net, but nothing getting by Jarry. Rust heads off for cross-checking though so Rangers get a mad-advantage opportunity.

8:34 p.m.: GOAL! Rangers answer right back. A shot by K’Andre Miller gets deflected off the foot of Matheson and in. Just 65 seconds after the Guentzel goal and the game is tied again.

8:31 p.m.: GOAL! Call on the ice stand, it’s a good goal. What a play by Guentzel, kicking the puck up and whacking it in. Awfully close and there was no conclusive evidence to overturn.

Jake Guentzel kicks the puck up from his skate, bats it into the net. A goal was called on the ice, but now it’s under review. pic.twitter.com/6Tzcm8ylUz

8:29 p.m.: Jake Guentzel knocks the puck out of the air and in. Original call is a goal but it’s going to review. That might be a high stick, it was awfully close.

This goal is insane. Jake Guentzel is insane. This game is insane. #StanleyCup | #LetsGoPens pic.twitter.com/UFXPBpEeiG

8:27 p.m.: More blocked shots by the Penguins on one end, another great pad save by Shesterkin on the other. Kaapo Kakko is sent off for delay of game after flipping the puck over the glass, Penguins to the power play.

8:19 p.m.: Penguins kill the penalty, but Rangers have gained momentum back. Zibanejad and Motte hit the post. One shot on the power play as Pittsburgh doing an excellent job of blocking shots.

8:16 p.m.: Penalty to Matheson for interference as he tosses Kevin Rooney to the ground in front. Rangers to the PP.

8:12 p.m.: Less than a minute in and three sensational pad saves by Shesterkin on Jake Guentzel. Stays strong on his post and keeps the puck out.

7:53 p.m.: End of the frame and it’s 1-1. Huge goal for Pittsburgh late in the period. Able to take advantage of the 4 minute power play and get the equalizer. Penguins outshot the Rangers 13-8 in the period.

7:51 p.m.: GOAL! It looked like Danton Heinen put home a rebound shot, but play continued on. Eventually buzzer rings since the Toronto review room determined the puck completely crossed the goal line. Adam Fox had whacked the puck out of the net, but just a second too late. 1-1 game with just over a minute to go in the first.

7:42 p.m.: Great chance by the Penguins as Rust feeds Crosby backdoor, but saved by Shesterkin. Scrum ensues after and it’s Ryan Strome and Bryan Rust going to box each for roughing. 4 on 4.

7:35 p.m.: Penalty killed by the Rangers. Right after play resumed 5 on 5, Marcus Pettersson rings a shot off the post. Slick move by Pettersson jumping up in the play and curling the puck away from the defender’s stick but couldn’t find the back of the net.

7:32 p.m.: Artemi Panarin off for slashing Mike Matheson. Penguins get the first power play of the game.

7:21 p.m.: GOAL! Chris Kreider with an absolute one-time missile gets by the glove of Tristan Jarry. Great pass by Mika Zibanejad on the 2 on 1 to find Kreider as the Rangers take a 1-0 lead 7:36 into the game.

The Garden is SHAKING 😱

7:20 p.m.: Great shift by the Penguins fourth line, multiple scrums in and around the night, but nothing doing. Multiple shots from the point by Letang created those opportunities.

6:45 p.m.: After taking part in warmups, Crosby is in for the Penguins, along with Rickard Rakell and Tristan Jarry. Rakell was injured in Game 1 after a hit by Ryan Lindgren, while Jarry is making his first appearance in these playoffs.

5:00 p.m.: Sidney Crosby is considered a game-time decision for the Penguins, according to Mike Sullivan.

Injury updates from Mike Sullivan:
-Brian Dumoulin’s status has not changed.
– Brian Boyle is out week-to-week with a lower-body injury.
– Everyone else – Sidney Crosby, Rickard Rakell and Tristan Jarry – continues to progress, and they’re all game-time decisions.

What channel is Rangers vs. Penguins Game 7 on?

Rangers vs. Penguins Game 7 will air on TBS in the United States. In Canada, the game will air on SN360, SNE, SNO and SNP.

Viewers in the U.S. can stream every NHL playoff game live on Sling TV. With the Sling Orange Sports Extra package, they can get $10 off their first month now with access to ESPN, ESPN2, ESPN3 and TNT. NHL playoff games on ABC are simulcast on ESPN3, which is included with Sling Orange, available for $35 per month ($25 the first month for new subscribers).

Game 7 of the Rangers vs. Penguins series will start just after 7 p.m. ET on Sunday, May 15. The game will be played at Madison Square Garden in New York.