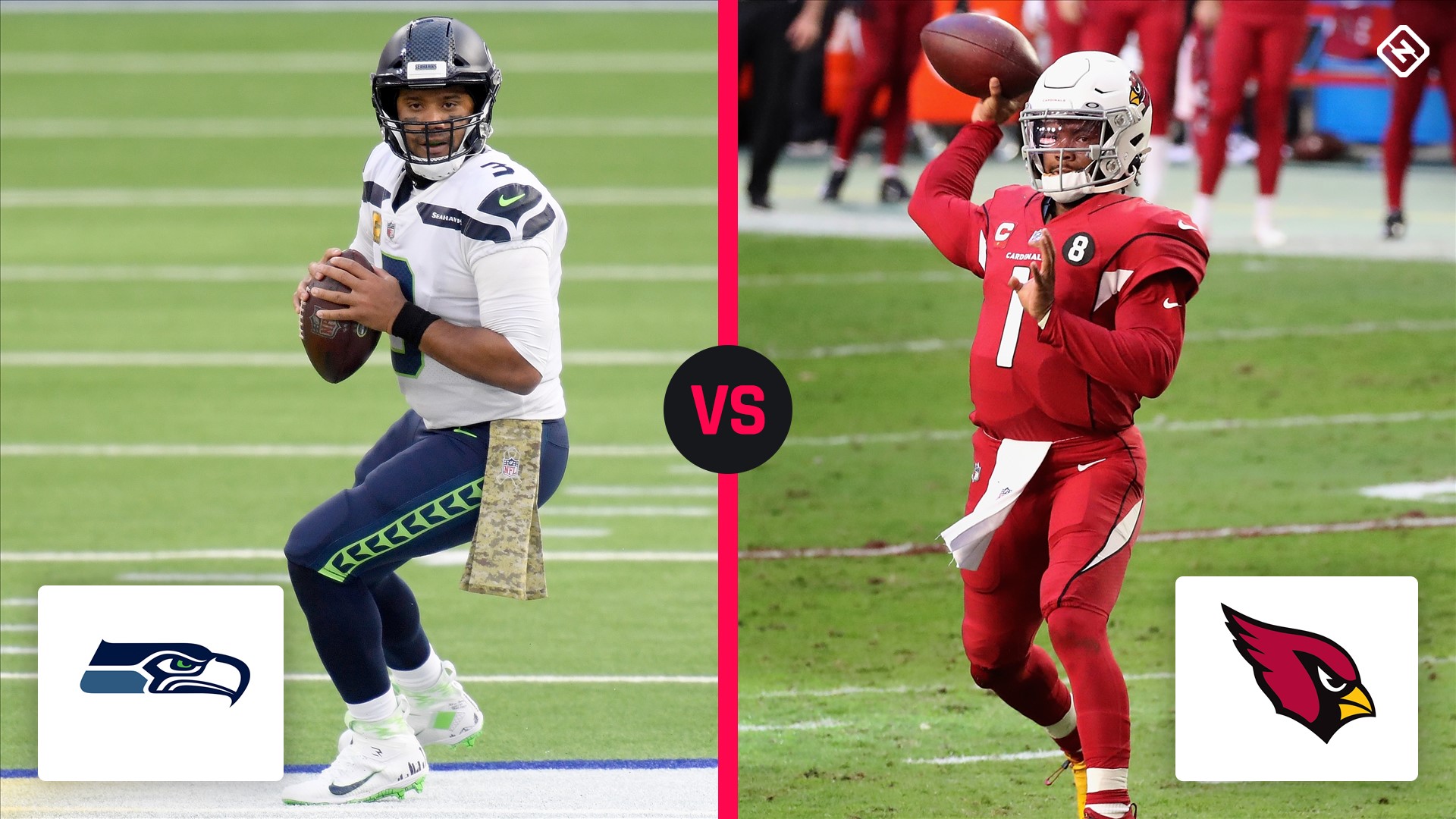 The Cardinals are hoping to get out of Kyler Murray what the Seahawks have enjoyed for many seasons under Russell Wilson — an elite dual-threat quarterback with at least one Super Bowl ring to show for it.

Based on what Arizona has seen from Murray — the No. 1 overall pick the 2019 NFL draft — in a season and a half, the team should feel confident about matching Seattle’s fortunes with Wilson. At the same time, Murray’s play can also help the Cardinals displace the Seahawks as the most consistent playoff team in the NFC West.

Some might say had the Seahawks not stole Wilson with a third-round pick in 2012, the door wouldn’t have opened for Murray to be a top prospect with his great athleticism but lack of prototypical QB size. Both Wilson (5-11, 215 pounds) and Murray (5-10, 207 pounds) also have had well-documented strong baseball backgrounds, both being drafted into MLB with Murray being a first-rounder in that sport, too. They each attended two Power 5 schools, having their most dazzling college football success with their second programs.

But beyond the similar paths to the NFL and the blessings of fleet feet and big arms, there’s more of a contrast between Murray, 23, and Wilson, who turns 32 at the end of November. Here’s a look at the divergence of how their respective rare skill sets are used to gain peak results:

It’s hard to imagine Murray operating in something other than the spread/”air raid” system of Kliff Kingsbury, which has led to a beautiful, natural transition from his Heisman-winning brilliance under Lincoln Riley at Oklahoma. Likewise, Wilson wouldn’t be the same QB away from the West Coast principles he’s had all throughout his career with Darrell Bevell and then Brian Schottenheimer.

What’s interesting is that the Seahawks and Cardinals don’t profile as one might expect in 2020. Last season, Kingsbury’s Cardinals threw 60.4 percent of the time with Murray, the 12th highest-total in the NFL. In 2019, Schottenheimer’s Seahawks passed at a 54.3 percent clip, No. 27 in the league.

This season, the script has been flipped to the Seahawks passing on 62.9 percent of their offensive plays (No. 7) and the Cardinals at 52.9 percent (No. 26). Seattle, with offensive line and backfield injury issues, plus a bad defense pushing them out of favorable game scripts, have been forced to #LetRussCook more than they would like. Arizona’s rate has been most affected by Murray running more often. He has gone from averaging 5.8 attempts and 34 yards rushing per game as a rookie to 9.7 attempts and 67 rushing yards per game. In a little more than a half season, Murray, at 604 yards rushing, already has 60 more than he did in all of 2020.

The Cardinals’ alignment-wise operate out of the shotgun 90.1 percent of the time, easily more than any other team in the NFL. In contrast, the Seahawks have Wilson taking 68.9 percent of his snaps from the shotgun. Both numbers are in line with last season.

The Seahawks are above the league-average with two-thirds of their snaps out of 11 personnel and pretty much the rest in 12 personnel. They don’t have the same receiver depth as the Cardinals.

Wilson is on pace for a career-high 593 passing attempts and a career-worst 17 interceptions, which are not unrelated developments, as more risks add up to more mistakes. Murray is on pace for 553, which is just slightly ahead of his rookie rate, tracking toward 18 interceptions.

One big difference is the fact Murray has been sacked only 13 times in 9 games, on pace to take only 23, or less than half of the league-high 48 sacks he took in 2019. Wilson tied Murray with those 48 sacks last season. This year, with 30 in 9 games, he’s staring at a career 53 sacks.

The Cardinals’ pass protection has improved and the Seahawks have been hampered up front. But this comes from the fact Murray is both picking good spots to take off and run for positive yardage and get the ball out more quickly. Wilson, meanwhile, called upon to be more of a pocket passer in his system, has held the ball looking to buy time for big plays downfield and given the interceptions, forcing the ball into coverage under pressure more than usual.

The Cardinals have embraced Murray’s running, now with a bigger and stronger frame, knowing his top-level speed and elusiveness are dangerous weapons that are hard to contain, especially in the red zone. He’s somehow added a new gear to what the Ravens’ Lamar Jackson did on the ground last season as league MVP.

With Arizona’s traditional power running game struggling with and without Kenyan Drake, Murray’s solid rushing has created better balance for himself as a passer. He’s walked the line well between scrambling to keep pass plays alive (see the winning Hail Mary against the Bills) and embracing the fell of when to call his own number as a diminutive dasher (see his second of two TD runs against the Bills).

Wilson has done his best running in six seasons. He’s averaging 7.2 yards per carry over his average of 5 rushes per game, to the point he’s nearly surpassed last year’s rushing total with 325 yards in 9 games. But consider he has only one rushing TD to Murray’s 10, and that came only a rare QB sneak against the Bills in Week 9.

The Cardinals will make it a point to get Murray his rushes, while Wilson’s ground production still comes down mostly to his busted-play scrambling, as using him to pad the rushing attack is simply something Schottenheimer hasn’t done in two-plus seasons. Wilson’s best years running came with Bevell in ’14 and ’17.

The Cardinals were very compressed in the passing game during Murray’s rookie season. His average net yards per attempt were 6.6 and he ranked No. 17 in intended air yards. This year, Murray, with more confidence, a true go-to wide receiver in DeAndre Hopkins and better protection, is up to. 7.6 adjusted net YPA and No. 10 in intended air yards. Wilson has stayed steady from 2019 to ’20 with his 8.7 adjusted net YPA and been even better with air yards, up to No. 6 while intending 9.0 air YPA.

Murray has had more real opportunities to hit on deep balls to Hopkins and speedy No. 2 Christian Kirk, but with all the backs, wideouts and tight ends the Cardinals use, he’s maintained his checkdown sensibilities with spreading the ball around, facilitated by the nature of the offense. With Wilson, there are fewer in-between throws, as the Seahawks’ offense works best when they can effectively power run and set-up high percentage downfield throws for Wilson.

The Cardinals’ scheme has proved to be more malleable, which has helped Murray. Wilson is still on pace for a career-high 49 TD passes and remains hyper-efficient despite the INTs with his 110.5 rating. Murray has made more out of his arm this season, but Wilson is the most accurate deep-ball passer the NFL has ever seen. Wilson isn’t in the most QB-friendly offense and continues to defy it out of necessity. Murray is definitely lifted by a scheme that goes all-in catering to his athletic and mental assets.

Murray isn’t afraid to wear his emotions on his sleeve and show his disappointment when the Cardinals lose, but he does it a strong, silent way. One can immediately tell he’s a highly competitive person who’s not used to losing and doesn’t like it. He also prefers to show his exuberance and make most of his noise on the field, as one of the self-described “quiet” leaders at his position.

With Wilson, you can always hear the positive attitude. How he throws the earworm of “Go ‘Hawks!” at the end of big interviews and his rah-rah spirit tends to be genuine, even when his critics think it sounds hokey.

Murray’s way isn’t better than Wilson’s, and Wilson’s way isn’t better than Murray’s. They take different approaches to winning a lot of games and putting up big passing and rushing numbers while doing it. They might have physical and historic profiles that will lead to them consistently drawing comparisons while they continue to duel a lot of big matchups in the NFC West. But it’s even better to appreciate how unique of quarterbacks both really are — vs. each other and the rest of the league.