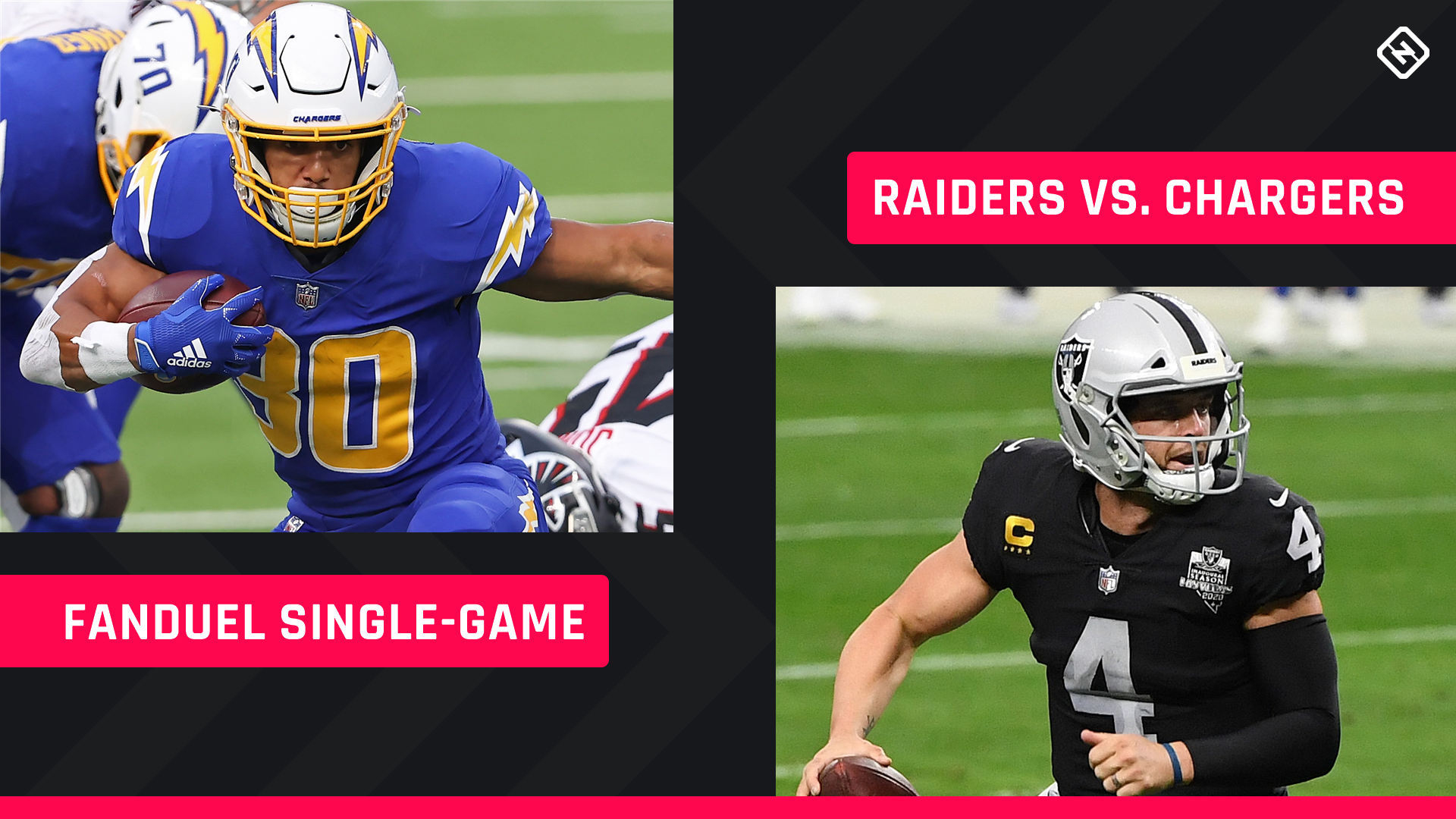 The Raiders playoff hopes are hanging on by a thread heading into Week 15. They are sitting at 7-6 and desperately need to win after a poor stretch of play has seen a few teams pass them in the wild card race. To keep pace with the rest of the division, they’ll need to beat their divisional rival, the Chargers, in what should be a high-scoring shootout. NFL DFS owners have to be excited about the potential for a high scoring game, and our Week 15 FanDuel Single-game lineup had numerous directions in which to go during this contest.

All told, we were interested in almost all of the high-priced players on this slate, and with few mid-tier values looking appealing, we took a stars-and-scrubs approach. We ended up starting both quarterbacks in our lineup to give us all of the passing production from each offense, paired each QB with a WR, and used our MVP spot to house the most versatile RB on this slate. This lineup has a bit of flexibility, as we have $1,500 left of our original budget, so if any of the many questionable players are ruled out, we’ll be able to pivot to other options that could make this unit even better.

There were several worthwhile options for the MVP slot, but ultimately, we went with Ekeler because of his excellent matchup. Raiders have struggled immensely against RBs this season and have surrendered the third-most FanDuel points and most rushing TDs to the position. They haven’t allowed fewer than 100 rushing yards to RBs since Week 11, and in that contest, they let the Chiefs backs total three TDs. They have been gashed by the likes of Brian Hill, Ito Smith, Ty Johnson, and Jonathan Taylor in recent weeks, so there’s little reason to think that Ekeler will have issues in this matchup. He’s game-script-proof, and if he gets close to the 20.3 touches he has been averaging in his three games since returning from a hamstring injury, he could have a massive day. We’ll bank on him here as a bit of a contrarian MVP pick that has just as much upside as either of the QBs in this game.

Herbert has cooled off the past few weeks after a red-hot start to his career, but part of the reason for that is that he has been playing against solid defensive coaches. The trio of Sean McDermott, Bill Belichick, and Raheem Morris made life tough on Herbert. Jon Gruden’s team won’t have the same luxury. Not only do they lack the defensive personnel needed to match up with the Chargers’ weapons, but they also fired their defensive coordinator Paul Guenther this week. Not having a coordinator on a short week could cause some disarray, so Herbert should be ready to take advantage of that. Besides, Herbert has logged multiple TDs in eight of his past 10 games and is averaging just under 289 passing yards per game this season. He should be able to take advantage of this defense and put up a solid stat line like he did last time these two teams squared off (326 passing yards, 24 rushing yards, two TDs).

Carr has had a very good season for the Raiders and has been one of the most consistent quarterbacks in fantasy. He has had a couple of bad outings in recent weeks, but the fact remains that he has multiple TDs in nine of 13 starts ,and in his last two games, he is averaging 348.5 passing yards. Carr logged only 14 FanDuel points the last time he met the Chargers, but he will almost certainly have to pass more in this matchup to take advantage of what has been, for the most part, a porous Chargers defense. The Chargers have allowed the ninth-most FanDuel points to QBs this year, so Carr should have a chance at a very good day, and by paying up for him and Herbert, we’re guaranteed most — if not, all — of the passing yards and TDs in this game.

Because we spent up so much for the two QBs and Ekeler, we had to find a couple of value options to fill out the rest of this lineup. Renfrow qualifies. He’s not a big-time playmaker, but he has averaged 7.3 targets and 52.7 yards in his past three outings. And last time he played the Chargers, he had 60 yards despite making just two catches. The Chargers have been solid against WRs this year, but Renfrow gives us a chance to create an opportunity for double-points with Carr and has a high target floor. We can’t pass on that, especially with there being only one Chargers receiver under $10K worth targeting.

Speak of the devil, Johnson is the man we’re looking at as our bottom-barrel play. With Mike Williams (back) looking highly questionable for Thursday’s game, Johnson would be favored to step into the No. 2 receiver role. He caught six passes for 55 yards and a TD against the Falcons after Williams’ injury, and Johnson could have similar success against a Raiders defense that has allowed the 12th-most FanDuel points to WRs this season. Because we have extra money available in our budgeting, you can pivot off Renfrow or Johnson if you like someone else better or if someone like Josh Jacobs is ruled out and Devontae Booker ($8,500) is thrust into a starting role.