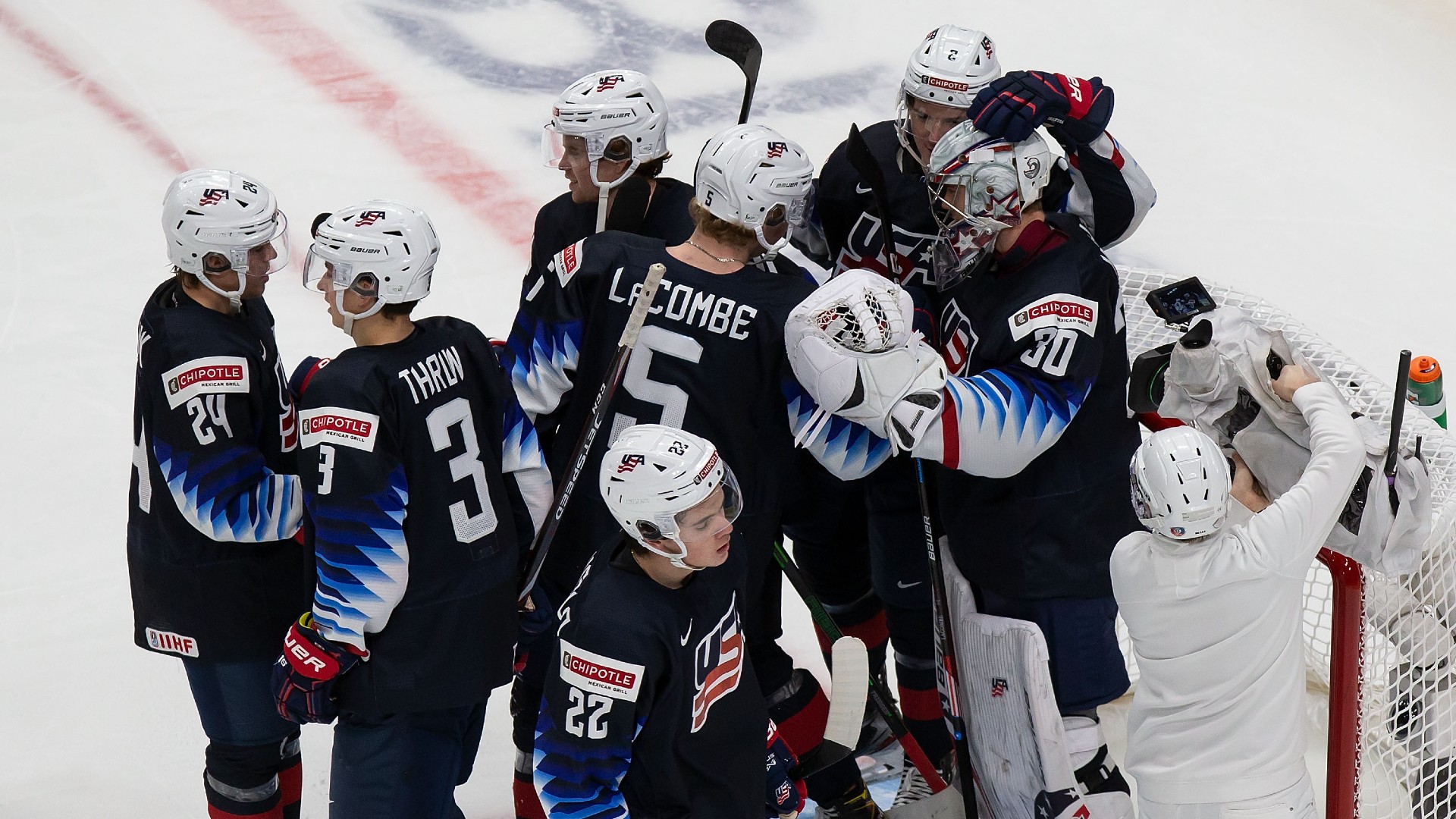 Saturday night, the United States hit the ice against Slovakia with a spot in the 2021 IIHF World Junior Championship semifinals on the line. It skated away with a much-closer-than-it-looks 5-2 victory. It was quite a turnaround from last year when the Americans were sent packing by the Finns via shutout in the quarterfinals. Eight players are back from that squad and they did not want to go home early again.

One of those returnees, Arthur Kaliyev, got the party started in the first period. He was sitting wide-open backdoor on a power play and easily knocked the puck in for his second goal of the tournament. Cole Caufield, who turned 20 on Saturday, also got his second of the 2021 tournament, and also with the man advantage, when he fired a wicked wrister that went bar down for the eventual game-winner. Sandwiched between those goals was one from a combo of newcomers as Ryan Johnson’s point shot went off John Farinacci and in. The Coyotes prospect added his second of the night on a beautiful backhand wrap in the third period to give the Americans a two-goal cushion. Matthew Beniers iced the game with an empty-netter.

“We had a good forecheck and I chipped it to Bobby [Brink] and then it kind of got caught behind the net there and I saw the D leave the net front and I just tried to wrap it around and fortunately it went in,” Farinacci said of his insurance goal.

Farinacci and his linemates, Bobby Brink and Brett Berard, were dominant all night.

Things were dicey for a while for the Americans, however. They had chances to break the game wide open in the second when they were up 1-0, but Slovakian netminder Simon Latkoczky was on fire as he robbed Caufield and Alex Turcotte on breakaways. Latkoczky stopped 38 of 42 shots he faced. Team USA took a 3-1 lead into the third but the Slovaks made it a one-goal game on a perfect redirect by a left-alone Dominik Sojka on the power play. It seemed as if they were destined to tie the game until Farinacci’s second.

“When they scored the second goal, I like how coach said we responded well and it just kind of brought urgency in us, you could tell,” said Ryan Johnson. “So I think the goal kind of gave us a little wakeup call that we needed to battle down a little more.”

Spencer Knight was solid in net once again as he stoned the Slovaks on an uncomfortable number of shots from the slot. The Slovaks’ first goal, by Matej Kaslik late in the second period, ended the Americans’ shutout streak at a World Juniors-record 218:53. Knight and Dustin Wolf combined for 245:07 of shutout time with a goalie in the net.

Trevor Zegras chipped in two assists and retook the tournament scoring lead from Canada’s Dylan Cozens at 15 points. That total also moves him up the U.S. single-tournament list, tying him with Hall of Famer Mike Modano. He now has nine assists, matching his number (and point total) from last year and putting him one point behind Jeremy Roenick on USA Hockey’s career World Juniors points list.

The U.S. was without Patrick Moynihan again; Moynihan sat out a second consecutive with an injury. The Devils prospect took a late, high (and, many would say, dirty) hit against Austria (the player was suspended two games for the hit) and was knocked around against the Czechs. Moynihan may be available with the Americans advancing.

Speaking of those pesky Finns from last year, the eight American returnees will get a chance at the ultimate revenge, because it will be Finland vs. the United States on Monday (9:30 p.m. ET, NHL Network/TSN) in the semifinals.

Sporting News had all the action as the United States advanced to the semis with their big win over the Slovaks.

12:54 a.m. — GOAL. Off the forecheck, Farinacci has the puck behind the net, comes out and scores far side on the backhand. USA leads 4-2.

12:52 a.m. — Americans controlling play with just over five minutes left as Cole Caufield gets two decent looks — one that went off the post.

12:40 a.m. — PP GOAL. With five seconds left on the power play, Samuel Knazko stops the clearing pass and sends the puck to Dominik Sojka who is wide-open in the left circle for the redirect. USA leads 3-2.

12:39 a.m. — Cam York makes a great block but the puck goes right to the slot and Spencer Knight comes up big on a point-blank shot.

12:38 a.m. — Helleson called for tripping. Slovaks head to their third power play of the game. So far, they’re 0-for-2 with two shots on net.

12:25 a.m. — Third period starts and again the Americans get some good chances within the first 20 seconds as he robs Turcotte on the rebound.

12:04 a.m. — With that goal, the Americans’ shutout streak ends at 245:07 with a goalie in the net and a world juniors shutout streak record of 218:53 (accomplished from Russia’s empty-netter on Christmas to Kaslik’s goal).

12:03 a.m. — GOAL. Puck somehow gets over to Matej Kaslik and he fires the one-timer that beats Spencer Knight. USA leads 3-1.

11:58 p.m. — Trevor Zegras gets hit late and seems a little shaken but the Americans now are on a 5-on-3. Zegras seems ok and stays out for the two-man advantage.

11:57 p.m. — John Farinacci point-blank off the faceoff but it’s right into Simon Latkoczy.

11:52 p.m. — Martin Chromiak rings one off the pipe as the Slovaks react to the goal with some good zone time.

11:50 p.m. — GOAL. Ryan Johnson sends the puck towards the net and with four guys in between (two Slovaks and two Americans), it goes off John Farinacci’s leg and in. USA leads 2-0.

11:48 p.m. — Americans come close as the pass banks off the Slovakian defender but Latkoczy is of course there. He is having a game.

11:38 p.m. — Another breakaway for Team USA as the Slovakian defender falls at the blueline and Alex Turcotte gets robbed by Simon Latkoczy.

11:32 p.m. — Cole Caufield is flying and gets a breakaway but the birthday boy is stopped blocker side and can’t sneak the rebound in.

11:10 p.m. — Trevor Zegras gets stood up as he enters the Slovakia zone and he goes right back to the U.S. bench. The hit caught him a little on the chin. He seems to be ok on the bench.

11:04 p.m. — Seconds after the Americans kill off the penalty, Spencer Knight robs Roman Faith in the slot. Faith grabs his head in disbelief.

10:44 p.m. — John Farinacci gets crushed against the boards up high and heads down the tunnel after.

10:40 p.m. — Scramble in front of the Slovakia net but can’t finish. Simon Latkoczy is in net for the Slovaks.