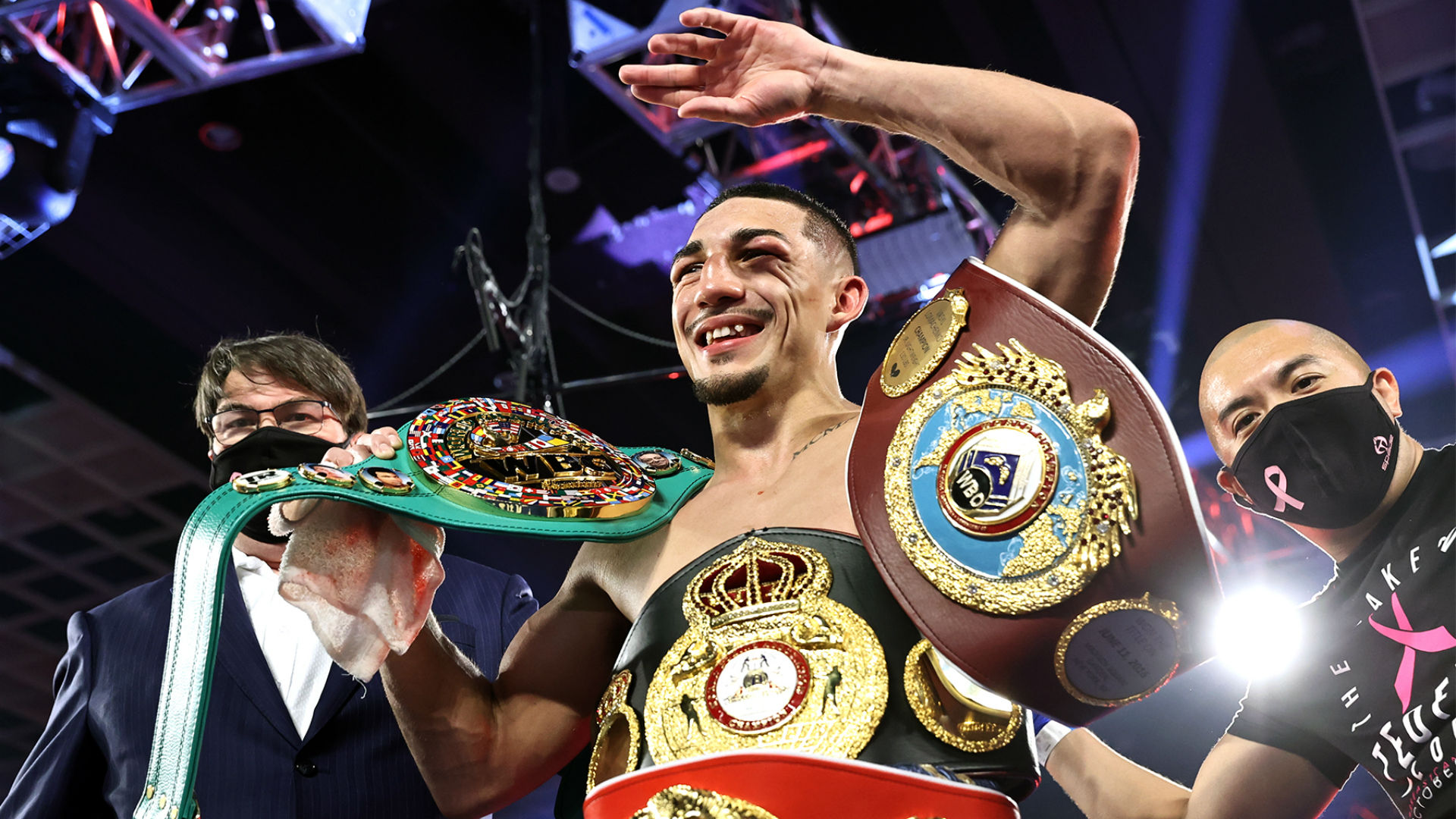 Not many people gave Teofimo Lopez Jr. a chance to defeat Vasiliy Lomachenko on Saturday night inside the MGM Grand bubble in Las Vegas. The notion was that the 23-year-old was too young, too inexperienced and not enough of a pure boxer to dethrone the champion many pundits viewed as the top pound-for-pound fighter in the sport.

The Brooklyn native went out and quieted the boxing world by proving that he is wise beyond his years and has a better boxing IQ than anyone thought. He also didn’t let the moment overwhelm him.

All of that led to him defeating Lomachenko by unanimous decision (119-109, 117-111, 116-112) to add the WBA (Super), WBO and WBC (Franchise) titles to his IBF lightweight belt. Lopez is missing only the regular WBC belt, which Devin Haney holds.

“I’m a fighter,” Lopez said in his postfight interview. “I had to dig deep. I knew he was coming. Keep pressuring him, and don’t give him an opportunity to set up. He was in a 14-month layoff. I knew it would take him some time.”

Lopez (16-0, 12 KOs) came out and let Lomachenko know that he was there to fight. He set the tone by doing something no one thought he would do: throwing the jab and working Lomachenko’s exposed body.

Lomachenko was trying to find angles and ways to connect, but Lopez would come forward, dictate the pace and then land the harder blows. His size and power looked to be too much for Lomachenko.

Loma got into a rhythm in the second half of the fight by staying on the inside, being more active and landing the crisper shots. The momentum shifted and the fight looked to be hanging in the balance.

As the fight entered the 12th and final round, Lopez was exhausted and looked to be on the ropes. Instead, he bit down on his mouthpiece and fought the best three minutes of his career. He hurt Lomachenko with a series of left hooks and body shots and forced Lomachenko back to the ropes to secure the decision.

The loss ends a 13-bout winning streak for the 32-year-old Lomachenko (14-2, 10 KOs), who took issue with the scorecards even though he acknowledged the decision was final.

“In the first half, he won more rounds,” Lomachenko said. “But I took over in the second half. I definitely don’t agree with the scorecards.

Here is what happened on the Lomachenko-Lopez card:

Round 12: Lopez just had the round of his life. He bit down on his mouthpiece and landed one hard left hook after another, including one that stunned Lomachenko. Time to go to the judges’ scorecards. It could go either way. (10-9 Lopez, 114-114)

Round 11: Lomachenko is pressing the issue and committing to being on the inside and willing to go toe-to-toe. Liked what Lopez did in the final 30 seconds. He was ripping the body and sending Lomachenko back. It all comes down to the final round. (10-9 Lomachenko, 105-104 Lomachenko)

Round 10: Right now, Lomachenko is in control. He has Lopez figured out. He’s firing off the jab, which is setting up his power shots. Lopez needs to keep his hands up as he’s getting shredded upstairs. (10-9 Lomachenko, 95-95)

Round 9: Lopez fought better but Lomachenko’s pumping the jab and throwing combinations, which negated the 23-year-old’s game plan. Lopez needs to go back to the body; that was his best recipe for success. We have a fight. (10-9 Lomachenko, 86-85 Lopez)

Round 8: The tide of the fight has shifted. Lomachenko let it loose by going upstairs and downstairs with combinations. Can see the frustration on Lopez’s face. How does he regain control? (10-9 Lomachenko, 77-75 Lopez)

Round 7: Lomachenko opened himself up by going inside and being willing to exchange, and he landed the crisper shots. You can see Lopez starting to get unglued and getting frustrated when Lomachenko would fight in the clinch. He needs to keep himself composed. (10-9 Lomachenko, 68-65 Lopez)

Round 6: Just when it appeared Lomachenko would win the round, Lopez stole it away with a short right uppercut followed by a right hand. Have never seen Lopez look so good. (10-9 Lopez, 59-55 Lopez)

Round 5: Lomachenko is waiting for Lopez to make a mistake. But here’s the thing: It hasn’t happened yet. Lopez just continues following the game plan and making Lomachenko ordinary. (10-9 Lopez, 49-46 Lopez)

Round 4: Lopez is fighting extremely well. He’s outboxing the boxer in addition to pounding the body. Too much movement and not enough work from Lomachenko. (10-9 Lopez, 39-37 Lopez)

Round 3: Right now, Lopez is quicker to the draw and landing the crisper shots. Lomachenko needs to get going and ramp up the activity. (10-9 Lopez, 29-28 Lopez)

Round 2: Another good round for Lopez as he continued to pump the jab and landed a solid left hook. But Lomachenko came on in the final moments when he landed a crisp combination. It was enough to win the round but the momentum looks to be shifting. (10-9 Lomachenko, 19-19)

Round 1: Couldn’t have asked for a better round if you are Lopez’s corner. He established the jab and, more importantly, went to the body, which Lomachenko has been vulnerable to in the past. Lomachenko doesn’t throw much in the first round as he processes the information, but Lopez did everything right in the opening sequence. (10-9 Lopez)

11:52 p.m.: It is now time for the main event as Vasiliy Lomachenko puts his WBA (Super) and WBO lightweight titles on the line against IBF titleholder Teofimo Lopez. The time for talking is over. Can Lopez back up everything he has been saying and dethrone arguably the top pound-for-pound fighter in the world? Or does Lomachenko reign supreme? We are about to find out.

11:36 p.m.: Barboza def. Saucedo via unanimous decision (97-92, 97-92, 96-93). Barboza stayed composed after being knocked down for the first time and made this fight look rather easy. He had consistent volume and a heavier work rate, both of which proved to be too much for Saucedo to overcome. You could tell Barboza wanted to prove a point. He could have won a boxing match without much issue over the slugger, but Barboza beat Saucedo at his own game by staying in the pocket and going shot for shot. A great performance by the 28-year-old, who is now in the thick of things in a loaded junior welterweight division.

11:18 p.m.: Saucedo and Barboza got tangled up in Round 7. Barboza got out and then stumbled for a second, and Saucedo hit two left hands to send him to the canvas. The referee initially ruled it a trip, but after the round ended, the Nevada State Athletic Commission conducted a replay review and declared it a knockdown. Good job by the state of Nevada in getting the call right. Hopefully, we’ll see universal instant replay in all states.

10:49 p.m.: It is now time for the co-main event of Lomachenko vs. Lopez as Arnold Barboza Jr. takes on Alex Saucedo in a junior welterweight bout. Barboza (24-0, 10 KOs) rolls in with three stoppage victories in his last four fights. Saucedo (30-1, 19 KOs) is a former world title challenger, losing to Maurice Hooker in November 2018. This is the biggest moment of Barboza’s career as he faces by far his toughest opponent. We’re going to learn how good the 28-year-old really is.

10:48 p.m.: It will be interesting to see when the main event starts, considering there’s a huge college football game between Alabama and Georgia. Currently, there are four minutes left in the third quarter. A source close to the situation told Sporting News earlier in the week that the running plan was to wait until the game ended and then Lomachenko and Lopez would make their ring walks.

10:26 p.m.: Berlanga def. Bellows by TKO at 1:19 of the first round. Berlanga stunned Bellows with an overhand right that sent blood shooting out of Bellows’ left eye. The beginning of the end came when Berlanga stunned Bellows with a short left followed by another overhand right to the top of the head that sent him stumbling to the ropes. Berlanga finished with a left hand, a blazing straight right and then a barrage of shots that forced the referee to step in and wave off the bout.

Berlanga came in wanting to log some rounds, but he saw an opening to end things quickly. In doing so, he became the first fighter to stop Bellows. He is a treat to watch and boxing fans need to pay attention to him.

10:12 p.m.: The opening bout of the Lomachenko vs. Lopez main card has Edgar Berlanga facing Lanell Bellows in a super middleweight bout. Berlanga is one of the most exciting young fighters in the sport; he’s undefeated in 14 fights, with all of those wins coming via first-round knockout. Bellows (20-5-3, 13 KOs) comes in with back-to-back knockout victories.

Don’t go to the bathroom. Stay on the couch. It shouldn’t last long.

10 p.m.: Welcome to Sporting News’ live coverage of the lightweight title unification clash between WBA (Super) and WBO champion Vasiliy Lomachenko and IBF titlist Teofimo Lopez Jr. This is the biggest fight to date since boxing returned in June from the COVID-19 global pandemic. Sit back, relax and grab the refreshments while you can. This is going to be a night to remember.

HALE: Lopez in the Canelo position against Lomachenko

When is the Vasiliy Lomachenko vs. Teofimo Lopez fight?