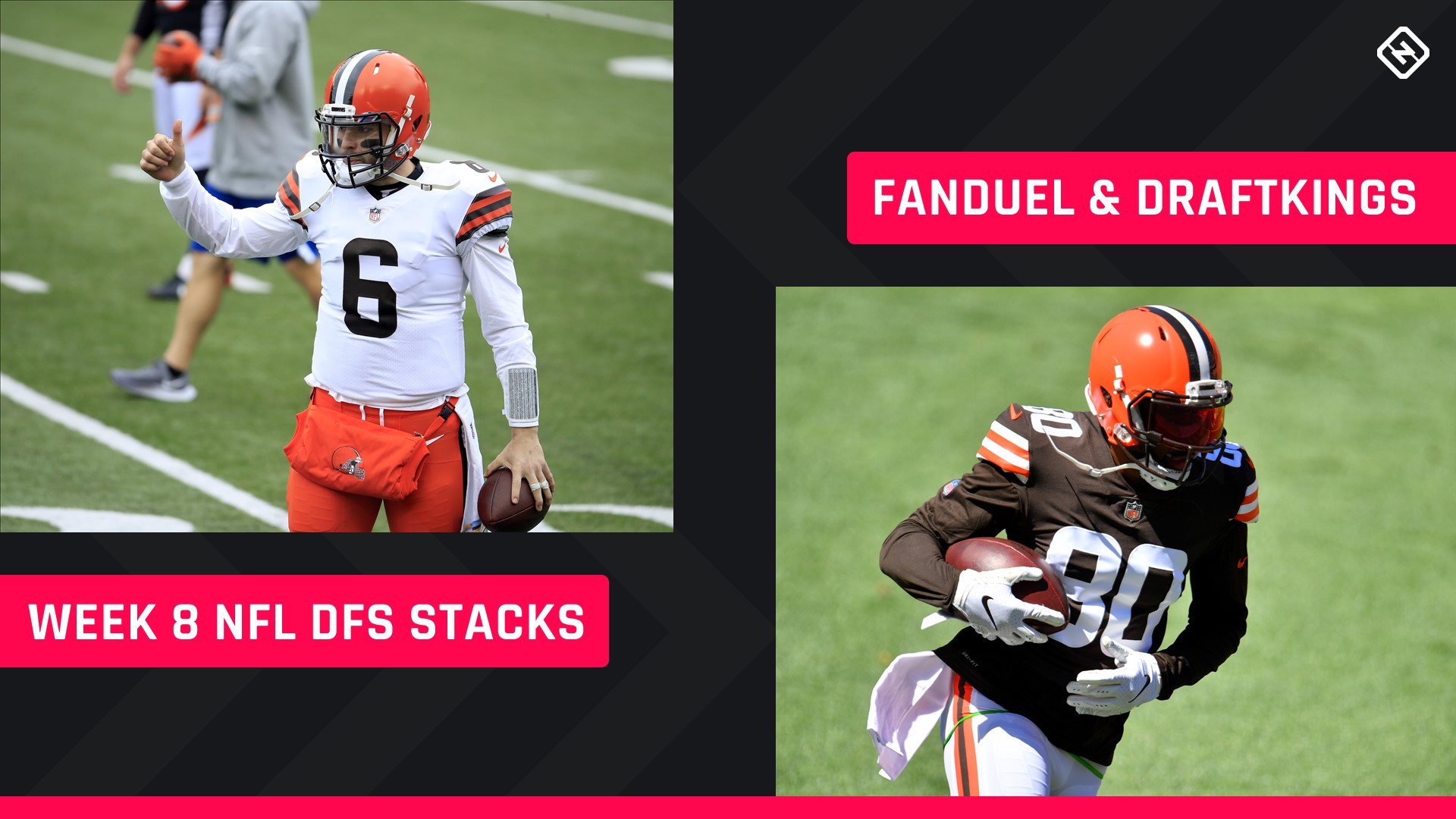 Week 8 is a sad one for our NFL DFS stacks article. After two successful weeks of RB-D/ST stacks, we don’t have such a grouping this week. We tried and tried, but nothing caught our fancy enough in that mold. Thankfully, we can look back fondly on Week 7 when Antonio Gibson and the Washington D/ST came through for us, and hopefully enough of you put that advice into action on FanDuel and DraftKings.

This week, it’s all about finding the best passing-game matchups (there are some very juicy ones that will also be very chalky). As Aaron Rodgers and Davante Adams showed last week, the optimal QB-WR combo can be big for your DFS wallets.

The Chiefs are favored by about 20 points in this game — and the line keeps moving. It will be popular to play any and all KC players this week, and there’s no reason to totally fade them from your plans, especially in cash games.

There isn’t even that much that needs to be said here. The Jets are terrible, and the Chiefs are awesome. If you’re looking to play only one of Kelce or Hill, you can make your decision based on the site format. Go with Kelce in DK’s full-point PPR and Hill in FD’s half-point PPR.

There’s also the matter of how the Jets defend each position relative to the rest of the league, but you’re just picking through minor details at that point. The Jets are slightly worse against tight ends than wideouts, which would give Kelce a slight edge.

Rodgers/Adams is my preferred pick to the Chiefs simply in the interest of differentiating a lineup. The Vikings, pass-defense wise, may actually be worse than the Jets, and they’re also more likely to keep this game competitive.

Adams caught 14 passes earlier this season against Minnesota, so we know that the Vikings can’t cover him. Coming off a 13-catch game, it’s obvious Rodgers and Adams are humming as well as they can together. If someone is catching double-digit passes this week, it’s Adams.

Normally, Tannehill and Brown find their way into the tournament section of this article, but Tannehill remains one of the most underappreciated, consistent quarterbacks in football, so he warrants cash-game play below the top-end QBs, too.

Brown has done a solid job of becoming a more well-rounded receiver in his second year in the NFL, so he has more cash-game intrigue than he did a year ago while also possessing sizable upside. The Bengals allow 30 FD points per game to WRs alone, and Brown is likely to pick up a good chunk of that.

As I wrote in my GPP lineup for this week that featured this trio stack, it’s not about the matchup — it’s about trying to use Tagovailoa before his price skyrockets, which it would after just a good game or two.

The Rams are vulnerable over the middle of the field thanks to a suspect linebacking corps, and that’s where Tagovailoa will have to make his living with Aaron Donald chasing after him. It’s not a perfect storm for a first NFL start, but Tagovailoa is good enough to play well anyway. We’re fading DeVante Parker due to a likely matchup with Jalen Ramsey (along with injury issues) and instead counting on Tagovailoa connecting with Williams and Gesicki.

Odell Beckham Jr. (knee) is out for the season, but somehow Mayfield looked better without OBJ on the field in Week 7. That’s not likely to be a permanent trend, but it’s enough to let us buy into Mayfield and company against a bad Raiders team.

Landry saw six targets in Week 7 and should see that many or more without OBJ for a full game. At tight end, whoever starts will be appealing. Hooper had apendicitis and missed Week 7, allowing Bryant to catch two touchdowns. If Hooper’s back, he’s the better play, but Bryant could have another big game if Hooper can’t return yet.

It’s definitely unusual, but Jackson likely will go underowned relative to Mahomes and Rodgers this week. That presents an opportunity. Of course, it could backfire to play Jackson against a strong defense like Pittsburgh, but we also know how good Jackson can be in DFS on his best days. This is one of the lower-ownership opportunities you’ll get to use Jackson, so it’s at least worth having a share or two of him somewhere. And if we’re going for upside on the Ravens, might as well use Brown, too, and hope for a long TD.