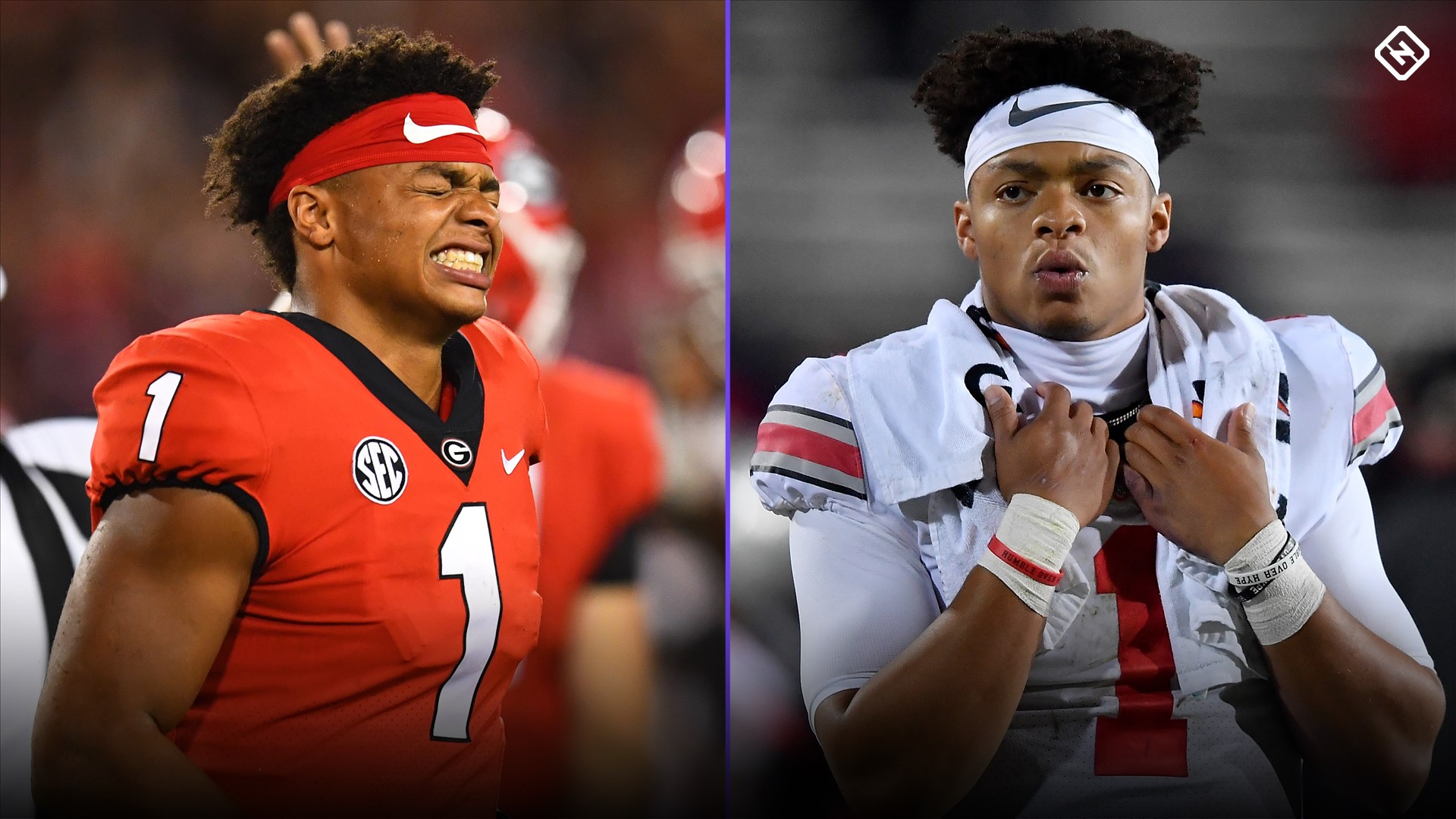 Justin Fields started his junior campaign in prolific fashion on Saturday, completing 20 of 21 passes for 276 yards, two touchdowns and no interceptions, adding 15 rush attempts for 54 yards and another score. His lone incompletion was a drop in the end zone by Chris Olave.

It’s performances like that that has Ohio State feeling good about its College Football Playoff hopes, with the Buckeyes eyeing the championship after a heartbreaking end in the semifinals in 2019. It’s also the reason why Fields, the only returning Heisman finalist from 2019, could be the front runner for the award in 2020.

That said, Fields nearly achieved all his accolades not at Ohio State, but at Georgia, where he enrolled in 2018. Things didn’t work out for the Georgia native at his home-state school, however, prompting him to head north for a better chance at playing time.

In the end, it appears to have been the right choice. With that, here’s everything you need to know about Fields’ decision to transfer from Georgia to Ohio State:

Where did Justin Fields transfer from?

Justin Fields transferred to Ohio State from Georgia, where he played a single season in 2018.

Many wondered why Fields, the No. 2 player in the class of 2018 — behind only Trevor Lawrence — committed to the Bulldogs in the first place. It likely had to do with his proximity to Athens, Ga., just an hour and 40 minutes east of Fields’ hometown of Kennesaw. Still, Fields would have to usurp true sophomore Jake Fromm for the starting job, a season after the latter led Georgia to a berth in the 2017 College Football Playoff national title game.

Fromm ended up starting all 14 games for Georgia that season. Fields announced his decision to transfer in January 2019, giving him this final statline at Georgia: 12 games played; 27 of 39 passing (69.2 percent) for 328 yards and four touchdowns; 42 rushes for 266 yards (6.3 yards per carry) and four touchdowns; one reception for minus-10 yards.

Curiously, Fields’ transfer occurred one year after Joe Burrow transferred from Ohio State to LSU after he failed to earn the starting position in Columbus. Burrow won the Heisman Trophy while leading LSU to the 2019 national championship in his second year in Baton Rouge.

Why did Justin Fields transfer from Georgia?

Fields transferred from Georgia in January 2019. One factor in that almost certainly had to do his inability to earn the starting position at Georgia: Per a December 2018 report from Dan Wolken, Fields was set on transferring after backing up Fromm throughout the 2018 campaign.

Another rumored element was a Sept. 29, 2018 incident in which Georgia baseball player Adam Sasser directed a racial slur at Fields. Sesser, then a senior second baseman for the Bulldogs, yelled from the stands of Sanford Stadium to “put the (N-word) in” after Fromm struggled against SEC East rival Tennessee. Fromm finished the game completing 16 of 22 passes for 185 yards. Sasser was dismissed from the team the following week.

When Fields announced his decision to transfer to Ohio State in January, he made no mention of the incident, thanking not only coach Kirby Smart and his staff for their role in his development, but also Georgia fans who supported him:

Still, Yahoo Sports’ Pat Forde reported that Fields sought a hardship waiver from the NCAA on the grounds he didn’t feel comfortable playing for Georgia’s baseball team. He was considered an MLB prospect in high school and a potential collegiate baseball player. Fields was granted the hardship waiver on Feb. 8, 2018 — he was already enrolled at Ohio State and taking part in winter conditioning drills — but refuted any notion that he didn’t feel comfortable at Georgia:

“I would like to thank the NCAA for its approval of the waiver allowing me to be eligible to play football this fall,” Fields said in a statement. “While my case was pending before the NCAA, my family and I did not feel that it was appropriate to publicly speak about the circumstances leading to my transfer. In my silence, people began to speculate, and the story took on a life of its own.

“Now that this matter is concluded, I would like to clarify some facts. I have no regrets about my time at UGA and have no hard feelings for the school or football program. My overall experience at UGA was fully consistent with UGA’s commitment to diversity and inclusion. My sister is a softball player at UGA. I am still close friends with many of my UGA teammates. A part of me will always be a Georgia Bulldogs fan.”

“Irrefutable documentation that has nothing to do with racism was presented to the NCAA in support of OSU’s request that Justin Fields be given a waiver,” Mars told ESPN. “That information wasn’t critical of — and didn’t reflect poorly on — the UGA culture, the UGA administration or staff, any particular student, or the student body. And it certainly didn’t reflect poorly on Justin or any member of his family. However, that documentation did provide support for the issuance of a waiver under the NCAA’s rules.”

Unlike many who enter the NCAA’s transfer portal, Fields left no doubt to where he was transferring. The question of “where” then became “why.”

Fields, meeting with reporters on the Buckeyes’ 2019 signing day, said his relationship with Ohio State coach Ryan Day was the biggest reason he transferred to Ohio State:

“Coach Day is a great coach. Great offensive-minded coach. We had a relationship in high school, but they had a commit at the time when I was getting recruited by them so I didn’t really have great contact with them at that time,” Fields said. “(Day) is smart as I can see already. I’ve met with him on some plays already and I can already tell he’s a great offensive-minded coach.”

That said, Fields said he had no expectations of being given the starting spot, which was open after the departure of Dwayne Haskins to the NFL. Day echoed that sentiment after Ohio State’s 2019 spring game, in which Fields completed 4 of 13 passes for 138 yards and a touchdown while adding 38 rushing yards and another score.

“I’m going to keep looking at it,” Day said at the time. “I don’t think right there we are going to make a decision on that. It will continue into the preseason.”

Fields kept repeating that line into early August, saying, “You can’t come in and act like you’re the leader. You have to get used to the guys and build relationships with them so they trust you.” Roughly two weeks later, Day announced Fields as the starting quarterback.

Day’s decision paid off: Fields was immediately successful, completing 238 of 354 passes (67.2 percent) for 3,272 yards and 41 touchdowns to three interceptions. He also added 137 rushes for 484 yards (3.5 yards per attempt) and 10 scores. That earned the true sophomore a third-place finish in the 2019 Heisman voting, behind Burrow and Oklahoma quarterback Jalen Hurts.

Most importantly, Fields led the Buckeyes to a 13-1 record, a Big Ten championship and a berth in the 2019 Playoff. Ohio State’s season ended with a Fiesta Bowl semifinal loss to Clemson; Fields threw an interception on the Buckeyes’ final offensive play of the season, allowing the Tigers to kneel and claim a 29-23 win.

What is Justin Fields’s college major?

According to Fields’ Ohio State roster page, he is majoring in consumer and family financial services.