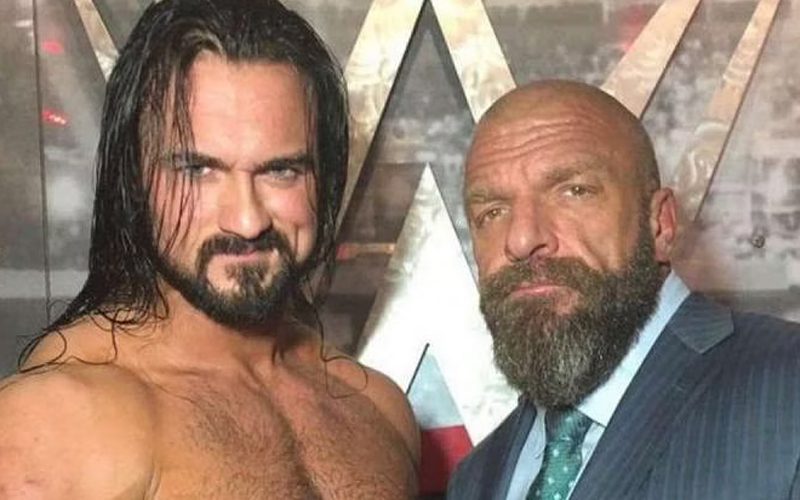 Drew McIntyre left TNA & returned to WWE in 2016. The Scottish Psychopath reinvented his entire physique & persona following his 2014 release. McIntyre is a legit star with the accolades to prove it.

TalkSport interviewed McIntyre, and that’s where he revealed the advice Triple H gave him for his comeback. He said that Triple H was the reason he returned to WWE. McIntyre considered going to NJPW, but William Regal suggested he contact Hunter before making a decision.

“He’s the reason I’m back in WWE 100 percent,” McIntyre said. “My mind was set at the time when I wasn’t going to re-sign with IMPACT that I’m going to Japan. I was made up in my mind and nothing could change my mind, but then William Regal, who has always been a mentor, gave me a call and said, ‘Speak to Triple H before you make any decisions.’ That led to a phone call from Triple H. We spoke for about 40 minutes and my mind was made up in the first 10 minutes. McIntyre said.

He elucidated how Triple H was consistently watching his Impact & indie performance’s. McIntyre seemed surprised by the fact of his mentor observation’s. But nevertheless Triple H was adamant in resigning him.

“Him telling me, ‘I’ve been watching you,’ and I’m thinking, ‘I appreciate that Hunter, but no you haven’t. You’re too busy, you’ve got too much to do. You’re not sitting watching Drew indie matches!’ But sure enough, the way he spoke about some of my matches and the way I’ve developed, I was like, ‘Wow, he really has been watching.’

Aside from the fact he was proud of how far I’ve come as a performer, it meant more to me how proud he was of how far I’d come as a man, and he made it clear to me that it was time to come home. I didn’t know it until I spoke to him, but then I knew it right away. I knew it was NXT, as well, somewhere I could make a difference. He had the same thoughts. We had an agreement and he stuck to it 100 percent.” McIntyre said.

McIntyre pitch a match with Triple H at WrestleMania on several occasions. As of now, that won’t occur following his wrestling retirement in March.

“I pitched at every opportunity I could,” McIntyre said. “‘How about us at WrestleMania? ‘What’s the story?’ He’d ask and I’d say, ‘What’s the story? We’ll figure it out, but what about you and me at WrestleMania?! How awesome would that be?’ We got in the ring together a few times during my first run, but when I returned, we did do a match in Japan with myself, Dolph Ziggler, and I can’t remember my other partners. But it was against The Good Brothers, AJ Styles, and Hunter. That was cool.”

Whether he is a heel or babyface, Drew McIntyre is a fan-favorite. From the “chosen one” gimmick in 2009, or the mediocre 3MB trio. The Scottish Psychopath’s versatility as a wrestler is superb. Throughout his 2nd tenure; McIntyre’s attain the WWE championship, won the Royal Rumble, and featured in high-profiled feuds.

Triple H’s influence on talent is immensely appreciated. Fans & Wrestlers will continue to praise him from her on out.

What’s your take on this story? Sound off in the comments.

I’m a young pro-wrestling enthusiast. I’ve been a pro-wrestling fan since 2003, attended shows, watched ppv’s, met some wrestlers, and more. Everyday I like to sing, write lyrics, do martial arts, play games, research, and attend classes to enhance my knowledge. My longing is for writing/journalism. Writing news-worthy content (whilst optimizing it) helps to effectively communicate facts, as well as opinions. I’ve volunteered for clients, as well freelanced for many; ensuring them that each assignment will be properly delivered.