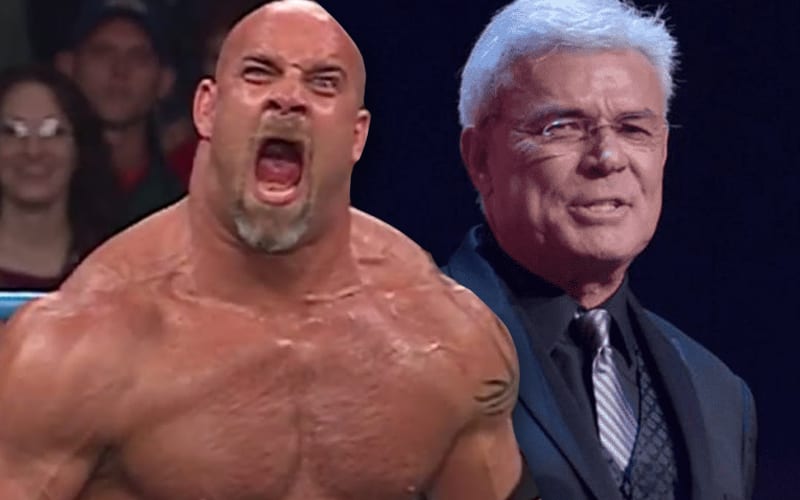 Nostalgia is rampant in pro wrestling, and fans recently saw Sting debut for AEW which was followed by Goldberg’s return to WWE. Each of those events sparked a different reaction from fans, and there is a reason for that.

Sting trended on social media after Goldberg returned. Fans were comparing AEW bringing Sting in to Goldberg’s WWE return. They had a right to make that comparison.

While speaking to Riju Dasgupta, Eric Bischoff broke down the different fan reactions to Goldberg and Sting. He said it all goes back to Goldberg’s start in pro wrestling. He was a megastar overnight, and thrusting him into the spotlight might not have been the best thing for him long term. Sting had a much different career in pro wrestling.

“I think it goes back to the beginning of Goldberg’s career. Bill Goldberg became a megastar almost overnight. And, as a result of that, Bill Goldberg was thrust into the limelight in main event matches with top-level talent, without really having the experience that would enable him to have longer, more dramatic types of matches that you would see out of a Sting, or a Chris Jericho, or you name it, any of the other top stars.”

“I think because of Bill Goldberg’s limited experience in the very beginning, and the fact that Bill didn’t really develop a much broader skill-set in terms of his technical abilities in the ring, fans sometimes look at Bill Goldberg as a limited star in terms of in-ring ability. I think there’s some resentment in the eyes of fans for that. They understand the character, how powerful the character is, but because of the limitations that he has in terms of what he can do in the ring, I think there’s a little bit of resentment or resistance to Bill Goldberg,”

Both Sting and Goldberg are WWE Hall of Famers. They are also still able to contribute in their own way. Some fans might appreciate one over the other, but a lot of that could also depend on how they are booked by their respective companies.