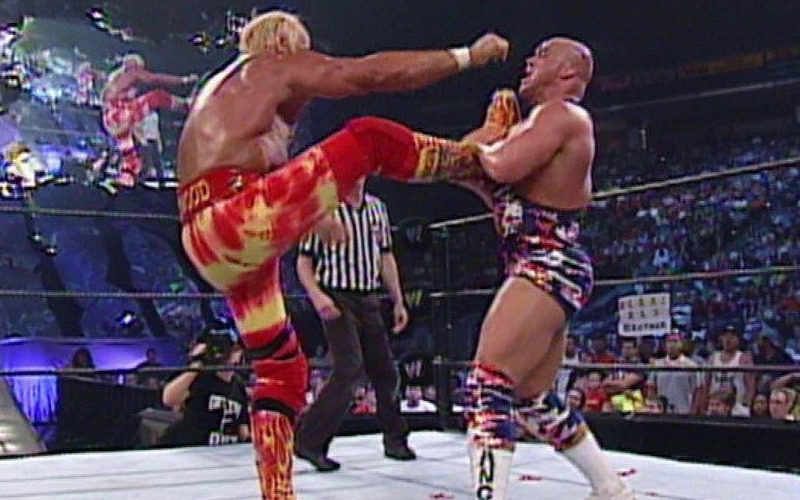 Kurt Angle recalls quite the request from Vince McMahon in a recent episode of The Kurt Angle Show. Perhaps, it shows just how much McMahon really didn’t trust Hogan, the legend that helped him build his very own WWE dynasty.

Kurt Angle’s name is legendary in the industry of pro wrestling. As so many of them are, that is a clear understatement, but one that needs to be stated regardless. Being at the top of the business didn’t come from having the greatest of relationships with absolutely everyone though, which is normal. He recently went into the working relationship he had with Hulk Hogan and recalled an incident that shone a picture on just how they worked together in WWE in the early 2000s.

Vince McMahon of course purchased WCW in 2001, and although a lot of WCW’s roster came over shortly after that purchase occurred, a lot of big names from that company didn’t migrate over right away. They (specifically Hulk Hogan, Scott Hall, Kevin Nash and of course Bill Goldberg), instead selected to ride out their contracts with Time/Warner. Essentially they opted to stay home and be paid to do nothing. This has gotten them a lot of flak over the years.

Regardless, they eventually did come over. The NWO was brought in on a storyline and many in the WWE locker room were hesitant about dealing with 3 men specifically: Hogan, Hall and Nash. They collectively had established for themselves quite the bad reputation over the years.

Kurt Angle was recently asked if it was difficult to work with the NWO at that time during the broadcast of the latest episode of The Kurt Angle Show. Specifically, Kurt recalled a time when Vince McMahon actually asked Angle to be present with him during a meeting with Hogan. This was done to apparently make sure that the match planned would go the way it was supposed to have gone, almost as if McMahon didn’t trust Hogan or something to that effect.

“I didn’t have a problem with them, I don’t think anybody had a problem with them. There was one time where Vince was really concerned because I had to make Hogan tap out at King of the Ring in 2002 and he wanted to make sure, he told me that Hulk Hogan would talk him out of it so he wanted me to be in the room with Hulk Hogan when he told Hulk that he was going to tap out to me.

I was really nervous, it’s Hulk Hogan, the biggest name in the business, in the history of the business, and here I’m going to make him tap out for the first time in his career and Vince wants me there to make sure he abides by it. It just blew my mind, I was nervous and scared and I was inexperienced. I didn’t know what to think or expect and here Vince wanted me to be there just to ensure Hulk Hogan didn’t talk him out of it. There were times where Hogan might have been political in the past, but he wasn’t at this point in time.”

The two (Hogan and Angle), of course worked together again and extensively in TNA. Rumors have been rampant about a return of Angle to the realm of professional wrestling he helped build. With talents like Gable Steveson on the horizon, who knows what this legend’s role could be, if it even is to be in WWE at all.

Domenic Marinelli is an author and freelance writer/journalist. Some of his work has appeared in The Sportster, E-Wrestling News, Pro Wrestling News Hub, The Recipe, babbletop.com, Guilty Eats, Par Ex News, CFL News Hub, Daily DDT, XFL News Hub, as well as other print and internet publications. He is the author of Generic V, Summer of the Great White Wolf, His Old Tapes (stories & poetry), and so many others. He lives in Montreal, Quebec, Canada. He’s an avid reader and loves hiking.