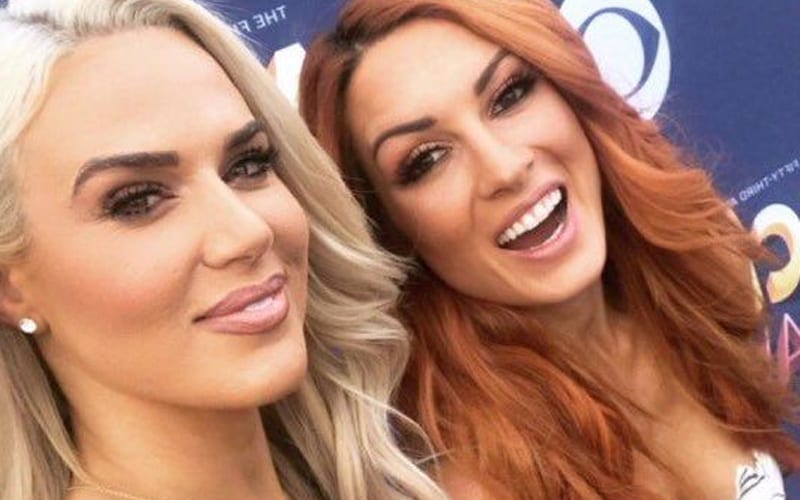 Becky Lynch might not be around WWE anymore, but she will be back. Odds are Lana will be very happy to see her. The two haven’t dealt with each other much on screen, but Lynch has apparently been a constant source of support for the Ravishing Russian.

While speaking to TalkSport, Lana revealed that Becky Lynch taught her a lot about pro wrestling. She will send her text messages now to encourage her. Some might not realize this, but Becky Lynch is someone that Lana can lean on during hard times as well.

“Becky has helped me a lot and that would probably be someone that a lot of people don’t know about, because you know characters and storylines, but man, I’ve learned so much from Becky. I think partly before The Man started and at live events she would be in the match taking heat and I would be learning from her. She was so tough on me, but man, if she wasn’t tough then I wouldn’t be where I am now. She’d be like, ‘toughen up,’ and this and that.”

“Now I get texts from her saying ‘I’m so proud of you.’ She texts me every single week. I’m so thankful for that because when this whole pandemic started, I remember being so discouraged and I remember her telling me ‘you’re so strong. You’re such a strong woman. Now you’ve got to be who you are. Keep on carrying this, keep working hard, harder than anyone else so we can bring the people back that we love so much’ – and I remember those words [begins to cry].

“I’m sorry. I just remember when she was like ‘you’ve got to be the strong woman that you are’ – those words helped me not to give up, you know?
“Hearing Becky say that about me. Every single day I start my morning like ‘I’m strong, I’m resilient I’m durable – I’m going to keep going.’
“I just think it’s so important the words that we use to people and that’s such a great example of Becky giving me hope. Her texts and guidance every single week is just… I’m so thankful.”

Lana is still going strong with Naomi as her partner, and WWE Women’s Tag Team Titles could be in their future. Lana didn’t get a chance to wrestle for those titles in the past. Whether Becky Lynch is backstage or at home, she will still be cheering Lana on. Now she might realize how much that support means to Lana as well.