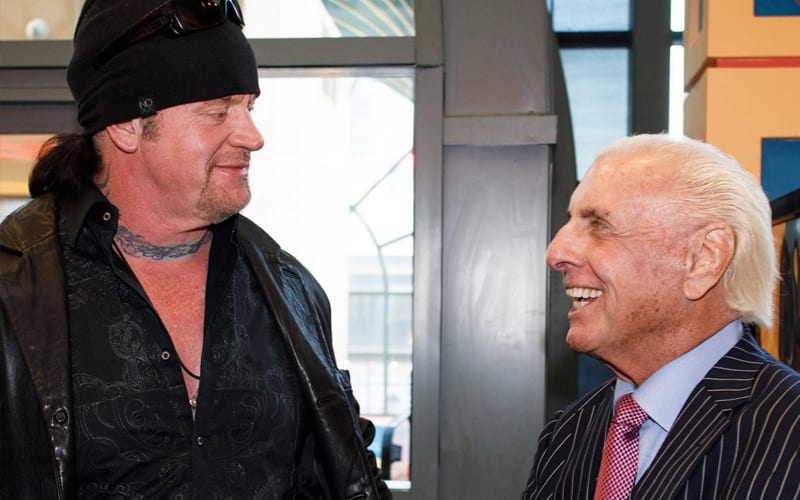 Ric Flair means a lot to many people throughout the world. The Undertaker had a very special message for The Nature Boy after he celebrated a big moment in his own career.

The Undertaker gave his Final Farewell at Survivor Series last year. Following the ceremony, The Deadman sent Ric Flair a text message to express his gratitude. Wrestling Inc spoke to Ric Flair and he shared that message.

“Happy Thanksgiving Champ!! Thank you for carrying this business and setting the bar of greatness! The bar we all strived to reach and very few have even gotten close to! Then, now and forever you are ‘The Champ’!! So proud to call you my friend.”

Ric Flair also said that The Undertaker “carried” him through their match at WrestleMania 18. Flair was going through a much different phase in his career, and he needed The Deadman’s ability to help him through that situation.

“Self confidence, no matter if it’s your body’s holding up or your mind and being able to do it and perform at the level that everybody thinks you can, it doesn’t matter how many times Hunter (Triple H) will say to me, ‘God damn it! You’re Ric Flair! Go out there and just relax. Be yourself.’ It goes in one ear, and it goes out the other.”

“You shake your head and go ‘yes,’ and then you walk through the curtain and it’s just not there. And I think that is just due to being beating down for so long. I still really enjoyed some of that time and such great guys, Randy [Orton], Dave [Batista and] Hunter. How cool is that? Right?!”

Ric Flair just celebrated his 72nd birthday, and he is still stylin and profilin. We’ll have to see when he reappears on WWE television since he was seemingly written out of the storyline this week on RAW as he was dismissed by his daughter.