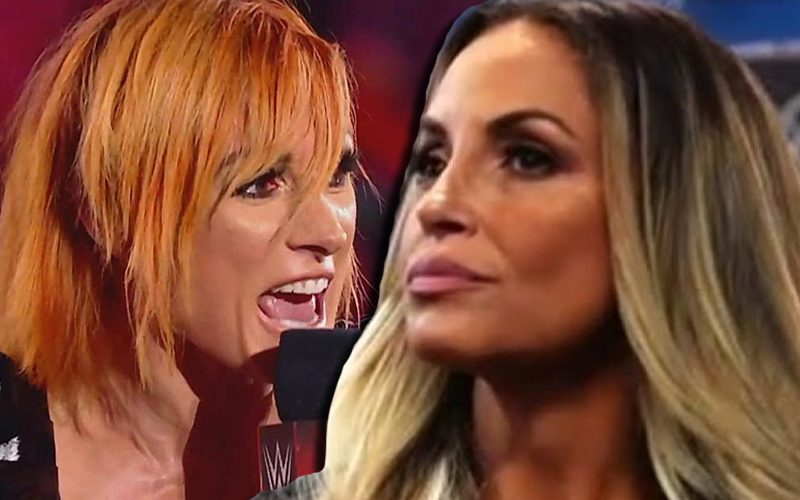 Trish Stratus has been touted as one of the most iconic popular female WWE Superstars in the history of the company. She helped pave the way for many female talent in general. Stratus is always open to facing Becky Lynch as well.

Back in March, Trish Stratus slapped Becky Lynch very hard during a live event in Toronto. Since then, the two have been taking shots at each other occasionally.

While speaking with VIBE 105.5FM, the WWE Hall Of Famer talked about potentially squaring off against Becky Lynch. Stratus made it clear she is always waiting in the wings for a match.

“I was hosting the events in Kitchener and Toronto. Becky Lynch was being a little bit of a brat. So it came down to a little slap from Trish Stratus to put her in her place. Will it result in anything else? I don’t know,  I still get asked about the Sasha Banks–Trish Stratus moment from the Rumble from 2018. That hasn’t come to fruition so far. At this point, I’ve just been focused on the show [Canada’s Got Talent] and I don’t know.

I saw Asuka has returned to WWE television so I’m going to be patiently watching that feud unfold. Becky in the meantime has hit rock bottom, lost her stuff, she lost her Women’s championship. I’m always here waiting in the wings and watching. Maybe or maybe not, that’s what I’ll say to you guys. People were pretty interested. It was kind of fun though.”

Trish Stratus also wants to make a return to WWE in an authority role. She also said Becky Lynch vs Lita’s match made her want to come back. We’ll have to see if Stratus and Lynch finally duke it out in the future or not.