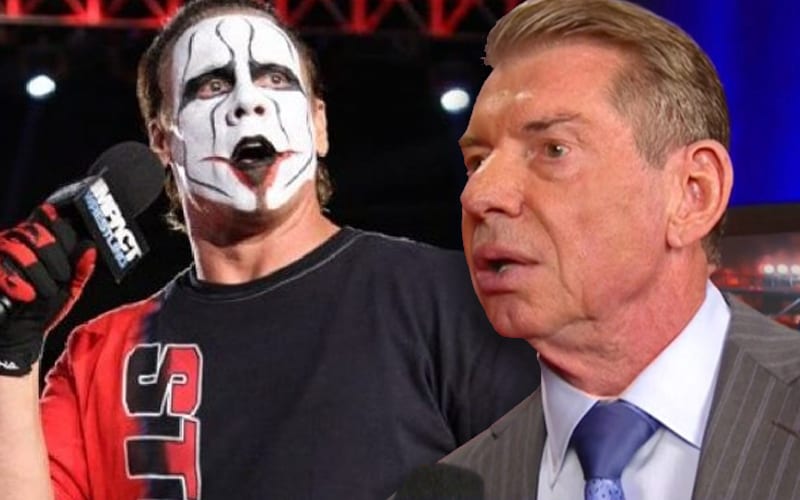 Sting was with WCW until the end, and then he elected to stay under Turner’s contract. The Stinger eventually found his way to WWE, but he spent a lot of time in TNA prior to that. Vince McMahon tried to get Sting a lot sooner, but they just didn’t make that work. McMahon’s reaction to Sting deciding to go to TNA was also priceless.

Jerry Jarrett was the first man to give Sting a break in the pro wrestling business. Decades later, Jarrett’s son gave Sting a call about a new pro wrestling company. It just seemed to fit for Sting a lot better than working for Vince McMahon.

While speaking to AEW Unrestricted, Sting reveled Vince McMahon’s reaction to the news that WWE wasn’t signing The Stinger. He literally said “BLEH.”

“I was called, it’s funny, I was called by Jerry Jarrett’s son Jeff Jarrett, you know. The guy who gave me my break originally, Jerry Jarrett, his son Jeff all those years later struck some kind of a deal with Dixie Carter. He called and said, ‘hey would you want to come and do a show.’ I did one, and then, ‘do you wanna do another one?’ — ‘Alight.’ — Then it was like, ‘could we maybe get you to sign a deal and do something with us?’ — I don’t know… it took some twisting of my arm at the time to do it, but I decided I was gonna do it.”

“Vince [McMahon] was in the picture once again during that time. I’ll never forget I’m talking to him on the phone. I go, ‘Vince, I’m gonna go to TNA.’ He said ‘the thought of you and the legacy that you leave behind and you going to TNA is just BLEH!’ I swear, he literally said, ‘BLEH!’”

“Then I ended up working for [WWE] a few years later.”