The four fantastic clean comics take on the universal subjects of relationships, food, sports, aging, and more, with all the witty observations and absurd notions, with nary an f-bomb in earshot. Here’s an album for the driver of the family car back to the third row, in a tone that fans of Jim Gaffigan and Brian Regan will appreciate.

When Saturday Night Live debuted in 1975, one of its breakout ‘Not Ready For Prime Time Players’ was the zany, lovable mop-haired Gilda Radner. Following her tragic passing in 1989 of Ovarian Cancer, her husband Gene Wilder and others formed Gilda’s Club, a cancer, grief, and emotional health support community of children, adults, families, and friends. 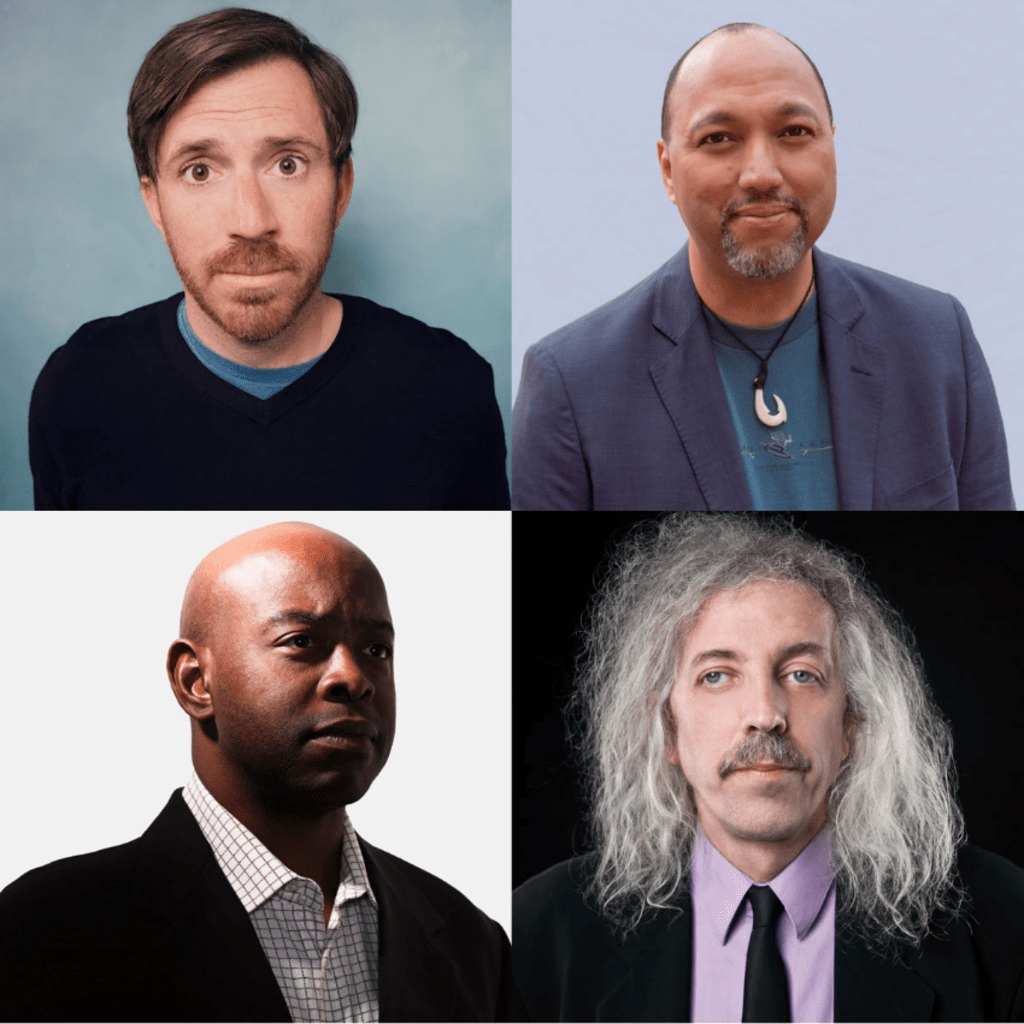 One of Gilda’s Club Grand Rapids’ most enduring fundraising events is the annual LaughFest comedy festival, held in Grand Rapids, Michigan. Now in its 10th year, the festival brings together comedy fans from around the country to celebrate the enduring spirit of Gilda Radner, and support her cause by focusing on laughter. The theme of laughter as a means for good emotional health and a way to increase the dialogue around emotional healthcare are just some of the positives to come from this very important event.

“We’re thrilled at the opportunity to collaborate on this unique recording from Gilda’s LaughFest 2020,” says Joanne Roehm of LaughFest. “Our Clean Comedy All-Stars Showcase has always been a festival favorite and we’re so happy to showcase these incredible comics in this way as part of our festival.”

“The Laugh Button has been a proud media partner of Gilda’s LaughFest since 2015,” says Chris Elles, Partner at TLB Records. “Their support for emotional health through laughter is extremely important to us and our entire comedy community. We can’t wait for this collaboration and the opportunity to further contribute and celebrate LaughFest’s 10 year anniversary. Also, anyone who knows me knows how much I love high-fives!”

ABOUT THE COMEDIANS
Kermet Apio has performed in 47 states, 7 Canadian provinces, as well as Hong Kong, Israel, and Pakistan. He has appeared on television shows such as “Star Search”, “Evening at the Improv” and “Comedy Showcase with Louie Anderson.” He has a special on Dry Bar Comedy and can be heard regularly on Sirius/XM satellite radio. He is a past winner of both the Seattle Comedy Competition and the Great American Comedy Festival. He has showcased at comedy festivals in Aspen, Vancouver, Grand Rapids, Boise, and Las Vegas.

John Novosad is a stand-up comedian based out of the Comedy Works in Denver, Colorado. John grew up in Boulder, Colorado. He’s performed in clubs, theatres, and bars across the country for over thirty years. Making his network television debut on The Late Late Show with Craig Ferguson, John followed that up with a second performance on the Ferguson show. He’s also appeared on Bryon Allen’s nationally syndicated Comedy.TV.  John has toured extensively over the years and continues to do so. A favorite at Denver’s Comedy Works, John’s disarming presence and sharp wit create a versatile and engaging performance every time!

Louis Ramey loves what he does for a living-  performing stand-up comedy over the past 20 years. Louis can be seen currently hosting TV Land Prime Movie Blocks. Other recent TV appearances include TBS Presents: A Very Funny Festival: Just For Laughs, and TBS Promo’s Bitcoms. He has been all over TV and the Net. You have seen him as a finalist on NBC’s Last Comic Standing, NBC’s The Tonight Show with Jay Leno, ABC Daytime’s The View and NBC’s Last Call with Carson Daly among many other television appearances in the U.S., Canada and abroad. Voted by students as”Campus Performer of the Year”, Louis Ramey is a strong headliner who is a guaranteed crowd-pleaser.

Joe Zimmerman has appeared on The Tonight Show with Jimmy Fallon, Conan on TBS, Last Comic Standing on NBC, The Late Late Show with James Corden, and his own Comedy Central Half Hour Special.  His debut album Smiling at Wolves reached #2 on the iTunes comedy charts, and he is a regular at New York’s iconic Comedy Cellar.  He has headlined in forty-three states, as well as Canada and the UK, and he has performed private events for national and global brands including Viacom, Spotify, MTV, Capital One, Comcast, Habitat For Humanity, EyeForPharma, Bright House Media, Great Clips, Huntsville International Airport, and Six Point Harness. His comedy is clean, smart, and original with a flair for silly, and he has been described as having an “aw-shucks” demeanor that is playful and accessible to all.

Al Mega is the Owner of Comic Crusaders, CEO of the Undercover Capes Podcast Network, CEO of Geekery Magazine & Owner of Splintered Press (coming soon), Make sure to check out our podcasts!