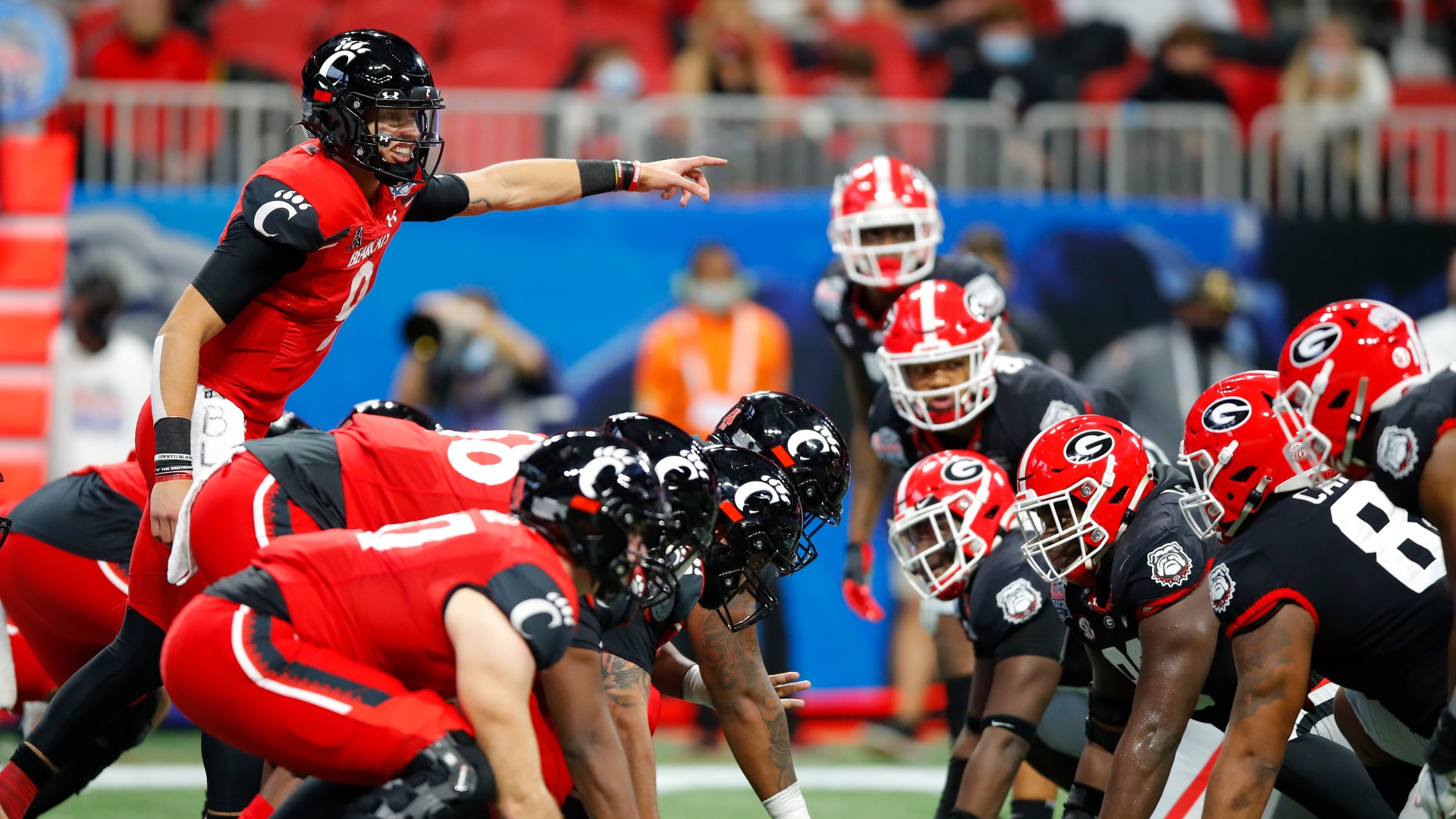 How many times do you need to see it?

No. 9 Georgia beat No. 8 Cincinnati 24-21 on a 53-yard field goal by Jack Podlesny in the Chick-fil-A Peach Bowl on New Year’s Day. It was a thrilling bowl game, but it only added fuel to the ongoing debate about the Group of 5 in the College Football Playoff setup.

Cincinnati (9-1) lost in heart-breaking fashion in another “almost” moment. The Bearcats nearly joined UCF (2017) as the second team from the American Athletic Conference team to finish undefeated in four seasons. Georgia (8-2) won the game, but that game prompted more questions about playoff expansion.

I’d rather watch Cincinnati play at Alabama in an 8 at 1 game than the game we’re about to watch next.

MORE: College Football Playoff schedule — What you need to know

The Bearcats almost became the fourth Group of 5 team to win a New Year’s Day Six Bowl: Boise State beat Arizona in the Fiesta Bowl in 2014, and Houston beat Florida State in the Chick-fil-A Peach Bowl in 2015. UCF, of course, completed an unbeaten season with a victory against Auburn in 2017.

At some point, we’re going to need to combine those two, and 2020 provided another chance. The committee could have put the Bearcats into the four-team CFP, but they chose to turn up the motivational speakers during a New Year’s Day Six bowl instead.

Cincinnati – much like UCF a couple of years ago – is in a no-win situation. If Bearcats beat Georgia, the narrative will be the Bulldogs were short players. If they lose, it’s they shouldn’t have been there in the first place.

The same thing happened in the Cotton Bowl between Oklahoma and Florida, but that included two Power 5 teams. The Bulldogs were missing five players who opted out of the game, but the Bearcats had some built-in excuses, too. Cincinnati played without leading rusher Gerrid Doaks, and star defensive back Ahmad Gardner left the game with back spasms. Tackle James Hudson was ejected for targeting in the first half.

The Bearcats were the better team for three quarters against the Bulldogs. Desmond Ridder completed 15 of 22 passes for 170 yards and two TDs in the first half, including an 11-yard TD pass to Josh Whyle with six seconds left before haltime. Jerome Ford opened the third quarter with a 79-yard touchdown run to open up a 21-10 lead.

Georgia which averaged 188.6 rushing yards in the regular season, finished with 45 rushing yards on 24 attempts. The Bulldogs committed two turnovers, and J.T. Daniels was harrassed by Cincinnati’s defense.

The Bulldogs rallied in the fourth quarter. Georgia cut the lead to 21-19 and clamped down on the Bearcats’ offense, and the game came down to an exciting finish between two outstanding defenses. Fickell made some questionable decisions down the stretch, and it cost the Bearcats. Daniels led the game-winning drive, which Podlesny finished with a clutch kick.

Cincinnati almost became the ninth team from a non-power conference to finish an unbeaten season since the BCE era. The non-AQ could not crack the BCS championship. The G5 can’t make the CFP. It’s time for a new clearance code.

Cincinnati provided the latest piece of evidence, but even in defeat the debate won’t go away. We know those teams can compete in an eight-team format. We’ve seen it too many times on a consolation stage to enhance that belief.

At some point, expansion will win out, and games like this are evidence why that won’t such a bad thing for college football. If the 2020 college football season teaches us anything, it’s that the sport can thrive in impossible circumstances, but there is always room for improvement.

The results will speak for themselves.