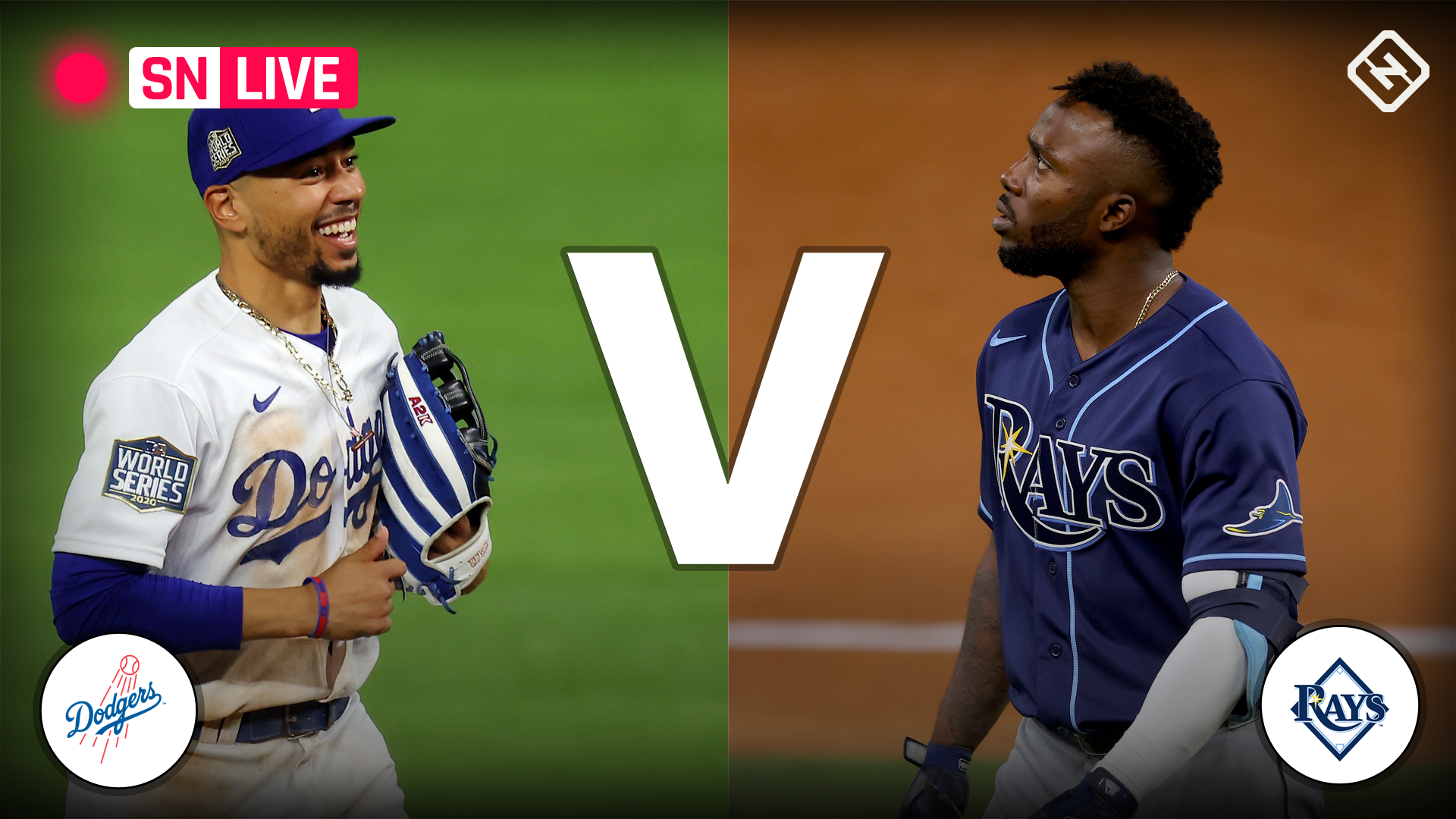 The Dodgers got off to a great start in the 2020 World Series with a resounding 8-3 win over the Rays in Game 1 on Tuesday, and will look to take a 2-0 lead with another victory in Game 2 on Wednesday.

Leading the offensive onslaught for LA was Mookie Betts, who went 2 for 4 with a home run and stole two bases to give fans all across the country a free taco from Taco Bell. Betts, whom the Dodgers acquired in a trade this offseason from the Red Sox, was so stellar that it prompted many fans to wonder exactly why Boston decided to give up the 2018 AL MVP.

Clayton Kershaw was also a big key for the Dodgers. The veteran ace exorcised some postseason demons and pitched a gem, allowing just one earned run on two hits and a walk in six innings of work.

The Rays struggled to get much production out of the top of their lineup, with their first four batters going a combined 1 for 15 with no runs scored and no RBI. That includes rookie DH Randy Arozarena, who went 0 for 3 with a walk and a strikeout. Arozarena has been sensational in October, racking up more hits this postseason (21) than he did during the entire regular season (18). He’s been breaking all kinds of playoff records all while playing on a bargain of a salary, and Tampa Bay will need him to continue his historical run to have a chance.

Sporting News is tracking live scoring updates and highlights from the 2020 World Series between the Dodgers and Rays. Follow below for complete results from Game 2.

11:45 p.m. — PITCHING CHANGE: Loup is done after retiring the first two batters. Diego Castillo will come on to face Taylor and try to get the last out, Betts is on deck at the top of the order.

11:39 p.m. — MID 9: Rays 6, Dodgers 4. Arozarena makes things interesting with a two-out infield single, but nothing doing for Tampa Bay. Rays are three outs away from evening up the series, Edwin Rios, Joc Pederson and Taylor due up for LA in the bottom of the ninth.

11:26 p.m. — END 8: Rays 6, Dodgers 4. Loup strikes out Bellinger looking to end the inning. Rays have one last chance to get some insurance, Zunino, Diaz and Lowe due up in the top of the ninth, Jake McGee in to pitch for the Dodgers.

11:23 p.m. — PITCHING CHANGE: Turner hits a double on an in-betweener to right-center as Kiermaier and Arozarena both misplay it. Muncy flies out and Smith lines out on a rope to Wendle at third. Aaron Loup will come in to face Bellinger, two outs with Turner on second.

11:13 p.m. — DINGER ALERT: Seager crushes wayyyyy over the fence in center field to lead off the eighth inning. Dodgers inch a little closer, down 6-4.

11:07 p.m. — MID 8: Rays 6, Dodgers 3. Adames laces a two-out double down the left field line, but Kiermaier grounds out to end the inning. Seager, Turner and Muncy due up for LA in the bottom of the eighth.

10:54 p.m. — MID 7: Rays 6, Dodgers 3. Wood works around a leadoff single off the wall from the pinch-hitting Yandy Diaz to keep Tampa Bay scoreless. We’ve reached the seventh-inning stretch; Hernandez, Taylor and Betts due up for LA in the bottom of the seventh, Peter Fairbanks in to pitch for the Rays.

10:42 p.m. — END 6: Rays 6, Dodgers 3. Nothing more for LA in the sixth, just the solo homer by Smith. Zunino will lead off the seventh for Tampa Bay, Alex Wood in to pitch for the Dodgers.

10:27 p.m. — SAC FLY: Choi and Margot get back-to-back singles to lead off the inning. Choi advances to third on Margot’s hit and scores on a line out to left from Wendle. Rays lead 6-2, one on and one out for Adames.

10:18 p.m. — END 5: Rays 5, Dodgers 2. Anderson gets out of the jam and strikes out Turner. Big inning for the Dodgers to get back in it. Choi will lead off the top of the sixth for Tampa Bay, Joe Kelly coming in to pitch for LA.

10:13 p.m. — PITCHING CHANGE: A walk to Betts and a base hit through the shift for Seager will do it for Snell. Nick Anderson will come in to face Turner, two on and two outs in the bottom of the fifth.

10:05 p.m. — DINGER ALERT. After a two-out walk to Hernandez, Chris Taylor breaks up the no-hitter and cranks one over the wall in right field. Dodgers cut into the deficit, down 5-2, Betts up to bat with two outs.

9:56 p.m. — MID 5: Rays 5, Dodgers 0. Arozarena grounds out to end he inning, but the Rays add two more to their tally. Bellinger will lead off the bottom of the fifth for the Dodgers.

9:55 p.m. — DINGER ALERT: Lowe does it again! After Meadows drives a two-out single up the middle, Lowe slaps one over the left field wall and the Rays now lead 5-0.

9:43 p.m. — END 4: Rays 3, Dodgers 0. Another 1-2-3 inning for Snell as he gets Muncy and Smith for back-to-back strikeouts. He’s up to eight on the night. Kiermaier, Zunino and Meadows due up for Tampa Bay in the top of the fifth.

9:32 p.m. — MID 4: Rays 3, Dodgers 0. Adames grounds out to end the inning, but still a good inning for the Rays as they plate a pair on Wendle’s double. Justin Turner will lead things off for LA in the bottom half.

9:29 p.m. — TWO-RUN DOUBLE. Wendle rips one into the gap in right-center and brings home Choi and Margot. Rays lead 3-0, two outs and a runner in scoring position for Adames.

9:23 p.m. — PITCHING CHANGE. Gonzalez is done for the night. Dustin May will come in to face Margot, two outs with a runner on first.

9:07 p.m. — MID 3: Rays 1, Dodgers 0. LA retires the side in order as Victor Gonzalez comes in and gets Meadows to pop up. LA has Chris Taylor, Mookie Betts and Corey Seager up in the bottom of the third.

8:58 p.m. — END 2: Rays 1, Dodgers 0. Snell works around a couple of walks and strikes out Kike Hernandez to end to escape trouble. Kevin Kiermaier, Mike Zunino and Meadows are due up for Tampa Bay in the top of the third.

8:41 p.m. — MID 2: Rays 1, Dodgers 0. Adames is originally ruled safe stealing second, but the call is overturned. Max Muncy, Will Smith and Cody Bellinger due up for the Dodgers.

8:37 p.m. — OUT AT HOME. Adames grounds to short and Margot is out by a mile at the plate. Curious choice to go with the infield in, now there’s two outs and a runner at first.

8:33 p.m. — PITCHING CHANGE: Manuel Margot draws a leadoff walk, stole second and advanced to third on a fly ball to center. That’ll do it for Gonsolin as Dylan Floro comes in for the Dodgers, one out and Margot on third, Willy Adames up to bat.

8:09 p.m. — Tony Gonsolin throws a strike to Austin Meadows for the first pitch of the game and we are under way.

The pitching matchup for Game 2 pits the Rays’ Blake Snell vs. the Dodgers’ Tony Gonsolin.