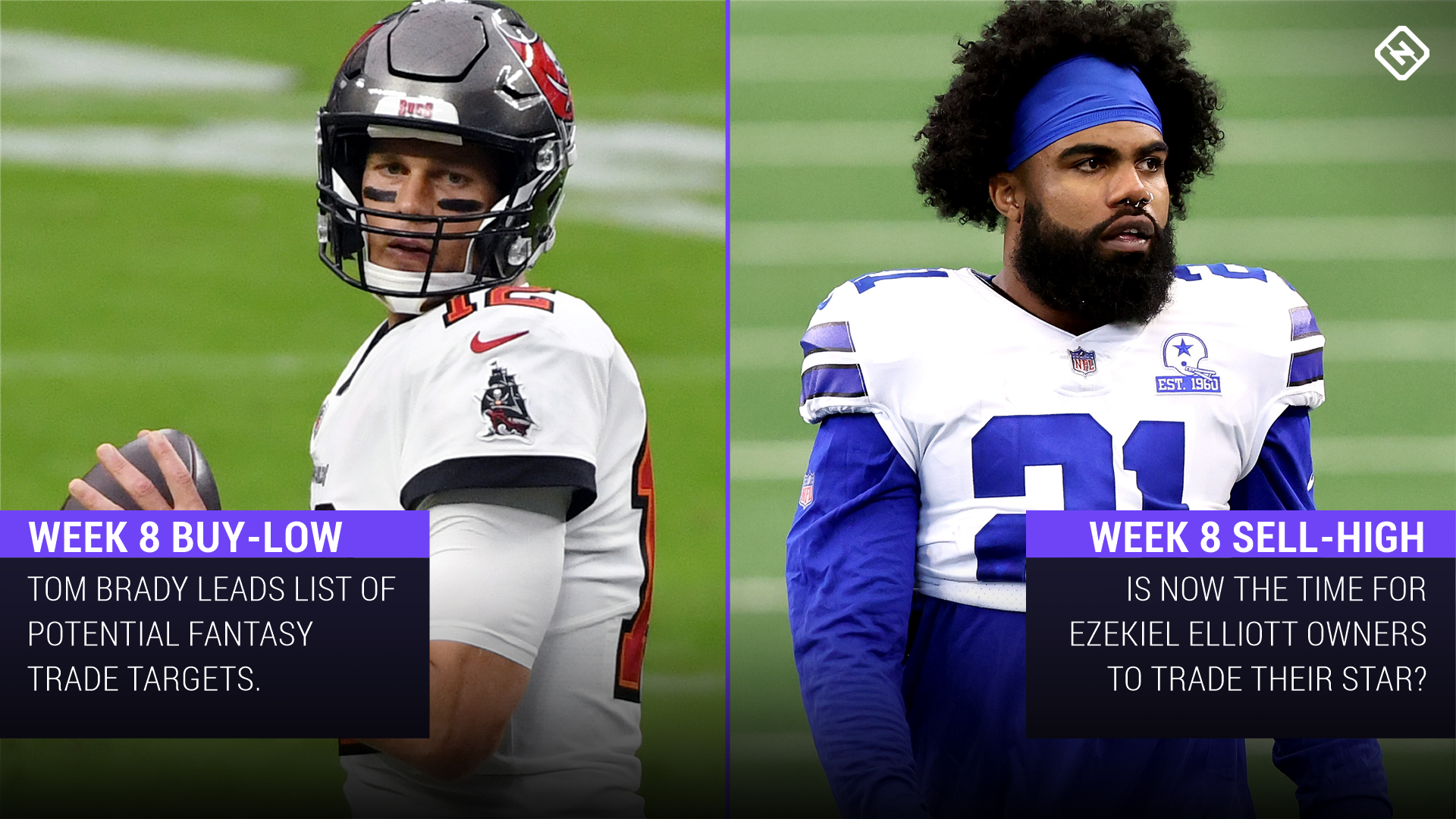 The injury bug bit hard last week, and more than a few fantasy football owners are likely in search of fill-ins. Generally, you should be always be planning ahead and thinking about your best path to a championship, but if you’re 3-4 or worse, you might need to do whatever you can to win the matchups in front of you and worry about the playoffs when (or “if”) you get there. That might mean making a deal that primarily only helps you in the short-term. On the flip side, if you’re already checking fantasy playoff schedules, you can try to take advantage of desperate owners. Either way, it’s all about finding the right buy-low, sell-high targets, and Fantasy Pros’ Mike Tagliere is here to help with trade advice in his Week 8 Stock Watch that includes Tom Brady, Ryan Tannehill, Mark Andrews, Ezekiel Elliott, and more.

This is definitely the time of year when the vultures should be circling around bad teams in your leagues. They might not be completely out of the playoff picture yet, so you shouldn’t feel guiltyt about trying to take to fleece them. If someone just needs live bodies for the week or is desperate at a particular position in which you have depth, go ahead and make a move, even if it looks like a short-term loss for you. Targeting guys who have already had their bye weeks in exchange for guys who have yet to take a week off can really pay off down the road as you jockey for playoff position.

Remember, values can change quickly in fantasy football, so don’t get too locked in on a certain trade target. Change your thinking as the trends change, but don’t be afraid to strike if you have a good offer on the table. —  Matt Lutovsky

I don’t even care if I’m buying high on him. With Kyle Allen under center, Washington is clearly willing to throw the ball a bit more. Despite being in a neutral gamescript in Week 6 and a blowout gamescript in Week 7, McLaurin has seen 23 targets that have netted 14 receptions for 164 yards and a touchdown. Remember D.J. Moore last year? Well, that’s McLaurin this year with Allen as his quarterback in the same offense. He’s a borderline WR1 for the remainder of the season.

These are the moments you have to capitalize on as a fantasy owners. Many were expecting a smash performance out of Andrews in Week 6 against the Eagles, who had been extremely generous to tight ends coming into that game. However, Andrews didn’t do much, keeping up his pattern of being extremely hit-or-miss, which is frustrating to some fantasy managers. Try to take advantage of that because if you’ve been trying to stream tight ends, you know just how hard this year has been for the non-elite options. With Andrews, at least you get top-three potential every week. His bye is already out of the way, as well.

Murray is the type of player who can win fantasy championships. If you trade for him now, you’re trading for a player who can be plugged in as a flex option most weeks. Even if you’re expected to pay RB3 prices, that’s fine. We know he’ll be around that value with Alvin Kamara in the lineup, but if Kamara were to miss any time, Murray would likely be considered a top-10 play every week. Most don’t understand the value he should carry.

This is the moment you swoop in and buy Tannehill. He posted a mediocre stat line against the Steelers where he finished with 17.3 fantasy points, but that’s still better than most realize in any given week. Fun fact: Tannehill has now scored at least 17.3 fantasy points in 15-of-17 games as the Titans starter. Knowing he’s already gotten his bye week out of the way, you should consider him a QB1 every week.

We now know that Antonio Brown will join the receiving corps of Chris Godwin and Mike Evans in Week 9, which is only going to boost the stock of Brady. When you look at the rest of season rankings and there are three Bucs receivers in the top 36, you want the guy who’s going to be delivering those fantasy points. While the Bucs receivers will be difficult to predict on a week-to-week basis, Brady shouldn’t be.

There are going to be some who view this as a buy-low window for Elliott. I’m not one of them. The offense struggling to put points on the board, and it doesn’t appear there’s an end in sight, as the offensive line lost stud left tackle Tyron Smith a few weeks back and then lost Zach Martin to a concussion. While we expect Martin to return, this team is in complete disarray, and Elliott might be able to get you a much bigger return than he’s worth based on name value.

He’s coming off his bye week, which you can use as a selling point in trade negotiations. There are also a lot of people high on Tua Tagovailoa under center. We cannot forget he’s a rookie, and it’s rare to see them come in and do well immediately. Not just that, but Gesicki’s role has been ultra-inconsistent. His weekly fantasy finishes have been 24, 2, 15, 45, 7, and 76.

If you have Green, you’re likely going to receive some trade offers. Unless someone is willing to overpay, you should hold. Green is right back in the WR3 discussion after racking up 24 targets over the past two weeks. After spending a year out of football, it’s possible that Green was like Rob Gronkowski and just needed to get into game shape. I’m a fan of holding Green and not selling.