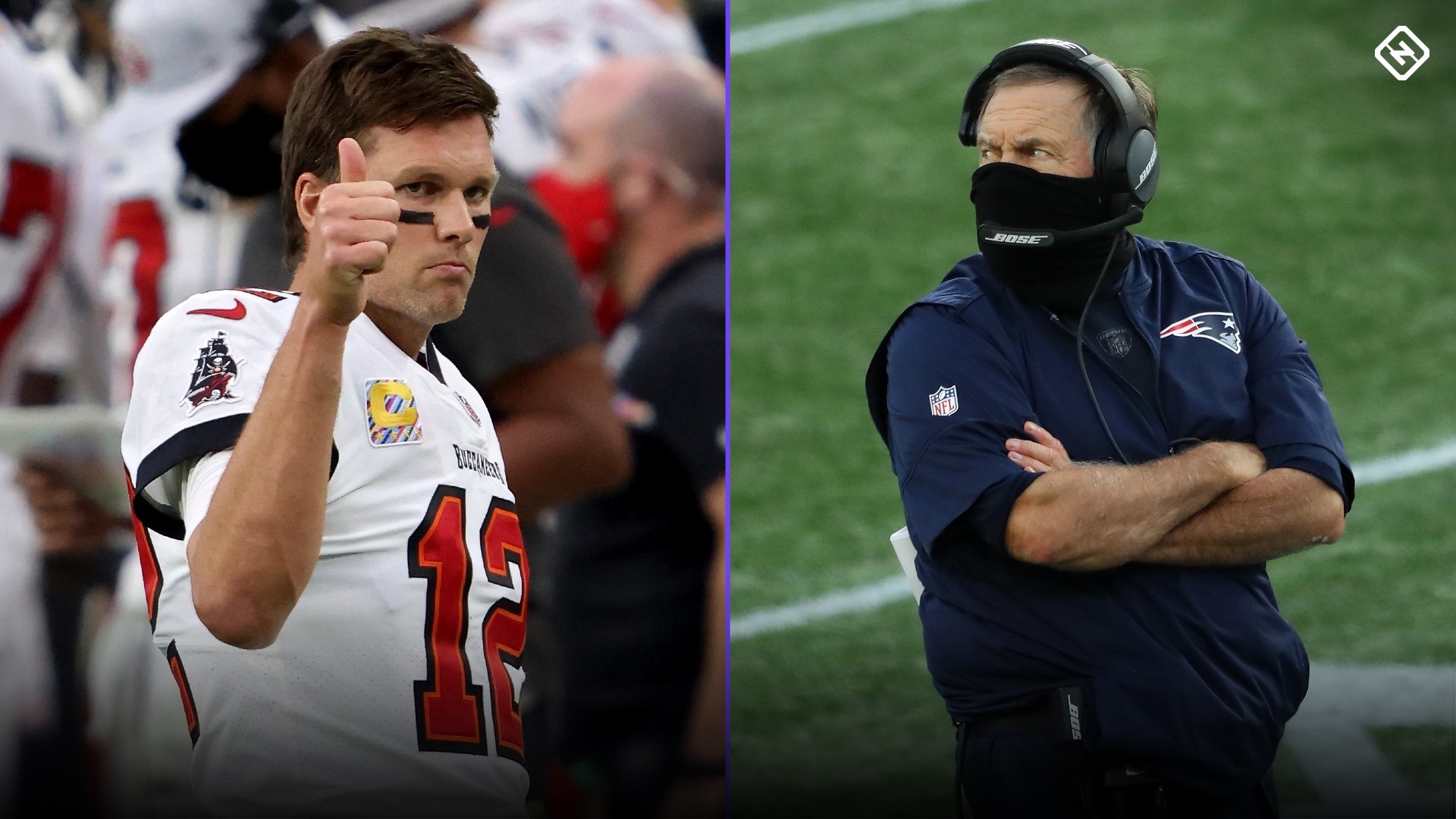 The Buccaneers are 5-2, in first place in the NFC South, with Tom Brady as their starting quarterback. The Patriots are 2-4, in third place in the AFC East, with Bill Belichick still as their head coach.

That’s pretty good evidence that Brady has gotten the much better end of their breakup from a 20-year relationship. But Brady’s edge in Tampa Bay vs. Belichick operating without him in New England goes beyond the current team records and overall success.

Brady isn’t just playing and winning like he usually does while Belichick has seen his team go through the motions during its first three-game losing streak since 2002. He’s also been the stronger personnel influencer and leader, lifting the Bucs up while the Patriots seem to be well, deflated, without Brady.

MORE: Why did Tom Brady leave the Patriots? A souring relationship with Bill Belichick

Since Brady decided to leave the Patriots and sign with the Buccaneers in March, he has been in complete control of his situation. Most every move since then by coach Bruce Arians and Jason Licht has been made to cater to Brady.

The Bucs acquired his former go-to tight end Rob Gronkowski during the draft and the team also drafted a right tackle (Tristan Wirfs), extra wide receiver (Tyler Johnson) and promising running back (Ke’Shawn Vaughn). Then after seeing some questions about running back depth and effectiveness with Vaughn and Ronald Jones during the summer, you can bet Brady had something to do with the Bucs bringing LeSean McCoy and Leonard Fournette in the fold.

Brady’s biggest, latest coup was forcing Arians to do a 180 on wide receiver Antonio Brown. BA repeatedly said during the offseason that he wanted to no part of AB’s diva nature, but they still signed him, thanks to TB12 pushing for it. The Bucs are dealing with wideout injuries, but with Mike Evans still playing while hurt and both Chris Godwin and Scotty Miller coming back strong from their ailments and Johnson also contributing, Brady pretty much got the Bucs to add Brown on a whim, using his power to convince them that Brown would fall in line because of him.

In essence, Brady is responsible for seven more additions to the offense. He’s also operating more of his type of his offense vs. Arians’ “no risk it, no biscuit” approach that led to Jameis Winston leading the league in interceptions last season, bringing “what could have been” to a 7-9 team in 2019.

Brady has gone back to the short-to-intermediate focus with calculated 20-30 yard shots that have made him the GOAT for all these years. Compared with what he had around him during his final days with the Patriots, he’s hit the mother lode of backs and receivers who can run all his desired routes inside and outside, a versatile mix of size, hands, speed and quickness for every situation. He knew what kind of car he wanted to drive and totally tricked it out. The Patriots had been doing that for him for a long time, but didn’t deliver after Gronkowski’s “retirement” after Super Bowl 53.

Brady picked the Bucs because it’s clear that they were willing to give in and bend over backward 10 times over to make him happy and trust him to know what he needed to bring back his elite play. The only player who has that level of power to assemble his ideal team doesn’t play in the NFL and his name is LeBron James.

After a few early hiccups with the virtual offseason not doing him any favors, Brady is in a groove with all the Buccaneers, on and off the field. He wasn’t afraid to get into their faces during that ugly Thursday night loss at the Bears in Week 5.

The Bucs were an undisciplined mess then. In just two weeks, they’ve eliminated the penalties and mistakes in total domination of two good teams, the Packers and the Raiders.

With the Seahawks, Packers and Saints all having defensive issues, the Bucs look like the new team to beat in the NFC because they are doing Patriots-like things that involve a lot of players “doing their jobs” to play ideal complementary football.

As for the actual Patriots with Belichick, first there was the issue of the COVID-19 outbreak that forced them to limp into a key early matchup with the Chiefs and then have a forced early bye week. They were given some excuses for poor play in their shocking home loss to the Broncos because of practice layoff and Cam Newton just returning. But you would have thought they would have shown more fight with Jimmy Garoppolo returning to New England in a must-win game after two straight losses with a trip to strong division-leading Buffalo looming. Instead, the Patriots seemed lost from the opening kickoff against the 49ers, something one just doesn’t see in games during the Belichick era.

The Patriots’ two wins are against the Dolphins and the Raiders. Those seem like forever ago, as was the competitive shootout with the Seahawks when Newton was able to duel surefire NFL MVP Russell Wilson until the end. New England is getting burned by its lack of viable supporting cast for Newton, more so at wide receiver and the other skill positions than an injury-altered line.

Defensively, Belichick let much of his pass-rush production walk and took a hit from two of the players in the team’s league-high eight opt-outs, linebacker Dont’a HIghtower and safety Patrick Chung, irreplaceable seasoned leaders and playmakers. Belichick has loaded up nicely with young defensive players, led by second-year outside linebacker Chase Winovich. But because of injuries and ineffectiveness, rookies Anfernee Jennings, Josh Uche and Kyle Dugger are non-factors with the Patriots needing more immediate-impact players.

The Patriots have failed to overcome the losses of Hightower, Kyle Van Noy, Jamie Collins and Elandon Roberts without adequate replacements at linebacker. Adrian Phillips has struggled replacing Chung. There’s also been a rapid age-related deterioration of 33-year old cornerback Jason McCourty, and with a lot more on Stephon Gilmore, the reigning Defensive Player of the Year isn’t the same shutdown type. New England has dropped to No. 25 in the NFL in sacks, further exposing the secondary.

The word genius is often associated with Belichick, but in a stunning development, he’s been off with his personnel work and motivational tactics in 2020. The smart scheming for the defense has been there, responsible for the Patriots looking good in that regard against lesser teams, but the Seahawks, Chiefs and 49ers all could get creative enough in the end to exploit its weaknesses with their strengths.

The contrarian would say that Belichick is turning to some other master plan of not worrying too much about this season with Newton and being fine with positioning the Patriots to tap into one of the three franchise passers in the first round of the 2021 draft, Trevor Lawrence, Justin Fields and Trey Lance. Or at this point, Kyle Trask and Mac Jones are starting to have appeal in the 10-20 range, too. It’s hard to believe, however, given Belichick’s competitive nature, that he is willing to tolerate this kind of effort.

There definitely was a power struggle of egos between Brady and Belichick. Brady found his ideal outlet but Belichick suddenly doesn’t have solutions without Brady masking many of the Patriots’ problems with his steady play and on-field leadership.

While Brady made the Buccaneers buy in and go all in every which way, the Patriots didn’t see the need to budge for him. No one expected Belichick’s mojo to go out the door with Brady like this, but it has, along with Brady still being much better than what Belichick is left with at quarterback.