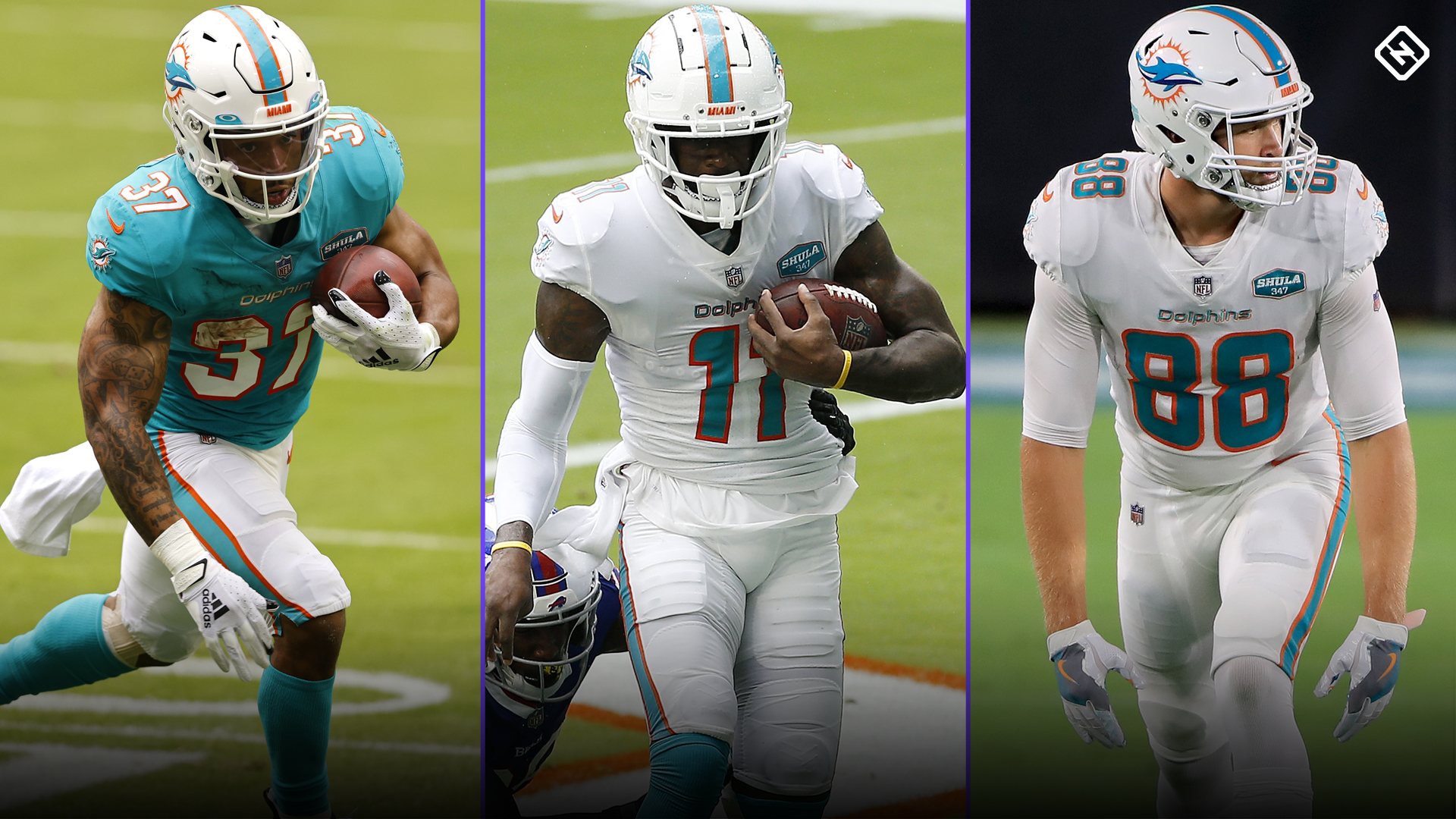 Fantasy football owners are going to have to make their key start ’em, sit ’em decisions a little bit earlier than they’re accustomed to this week. The NFL has a three-game Saturday slate, and there will be plenty of injury concerns in those matchups. Notably, the Dolphins-Raiders game features several key, banged-up players, as Myles Gaskin, DeVante Parker, Mike Gesicki, and Derek Carr are all dealing with problems that could leave them “questionable” for the affair. Here are the latest updates on those injuries and how they impact fantasy football rankings ahead of fantasy championship games.

Is Myles Gaskin playing this week?

Ahead of their Saturday night game against the Raiders, the Dolphins activated Gaskin off the COVID list and he was able to practice on Wednesday, per ESPN’s Cameron Wolfe. That indicates that Gaskin will play on Saturday.

It’s unclear what exactly Gaskin’s role in the Dolphins offense will be after Salvon Ahmed’s 122-yard outburst as the lead back last week, but the most likely scenario would be the two splitting carries and serving as a true one-two punch. Both will be viable starts against a weak Raiders run defense, so feel free to fire up Gaskin in a favorable matchup.

Is DeVante Parker playing this week?

UPDATE: Parker was limited in practice all week and is officially “questionable” for Saturday night’s game.

Last week, the Dolphins were “hopeful” that Parker (hamstring) could play against the Patriots. That didn’t quite come to fruition, but with another week of rest under his belt, he may have a chance to play against the Raiders.

Parker was “limited” at Dolphins practice on Tuesday and Wednesday after he was limited at practice all of last week before being declared inactive. If Parker can’t log a “full” practice session before Saturday, he could be truly “questionable” to play against the Raiders. That will make Parker’s status on Thursday critical in determining his availability.

If Parker can’t play, Mack Hollins and Lynn Bowden will continue to get extra snaps at the receiver position. Bowden is the better option for fantasy owners because of his volume, so if Parker can’t go in a solid matchup, feel free to roll with the rookie from Kentucky.

Is Mike Gesicki playing this week?

UPDATE: Gesicki was limited in practice all week and is officially “questionable” for Saturday night’s game.

Like Parker, it seemed like Gesicki (shoulder) was going to have a shot to play against the Patriots last week, as NFL Network’s Ian Rapoport reported that Gesicki had “a real chance of playing”. That didn’t end up happening, but that should indicate that Gesicki is close to returning.

It’s unclear whether Gesicki will play at this point, as he has logged back-to-back “limited” practices to start the week. He and Parker appear to be very much in the same boat, so unless Gesicki is able to log a “full” session on Thursday, he will likely be truly “questionable” for his matchup with the Raiders.

If Gesicki is unable to play, Durham Smythe and Adam Shaheen will get most of the work at TE. Smythe led the team with 40 receiving yards against the Patriots, so he could be a low-end streamer or bargain fantasy option, but there are better players to trust on this week’s slate. If Gesicki is out, definitely pivot to another higher-ranked player from our Week 16 fantasy TE rankings.

Is Derek Carr playing this week?

UPDATE: Carr was not on the Raiders final injury report, which indicates that he will start on Saturday night.

Carr suffered a groin injury early in the Raiders’ Thursday Night Football loss to the Chargers in Week 15 and didn’t return. It looked like Carr was a shoo-in to miss time as a result of the injury, but according to Tashan Reed of The Athletic, Carr was able to practice fully on, which should put him on track to play Saturday against the Dolphins.

Those hoping to see a Marcus Mariota vs. Tua Tagovailoa battle will be a little bit disappointed, but this should provide a minor bump up to the Raiders receiving weapons, as Carr isn’t nearly the scrambling threat that Mariota would have been if he played. Carr is in a tough matchup, so trusting him outside of two-QB and Superflex leagues isn’t recommended, but having him around should be a minor boost for the Raiders’ passing game.