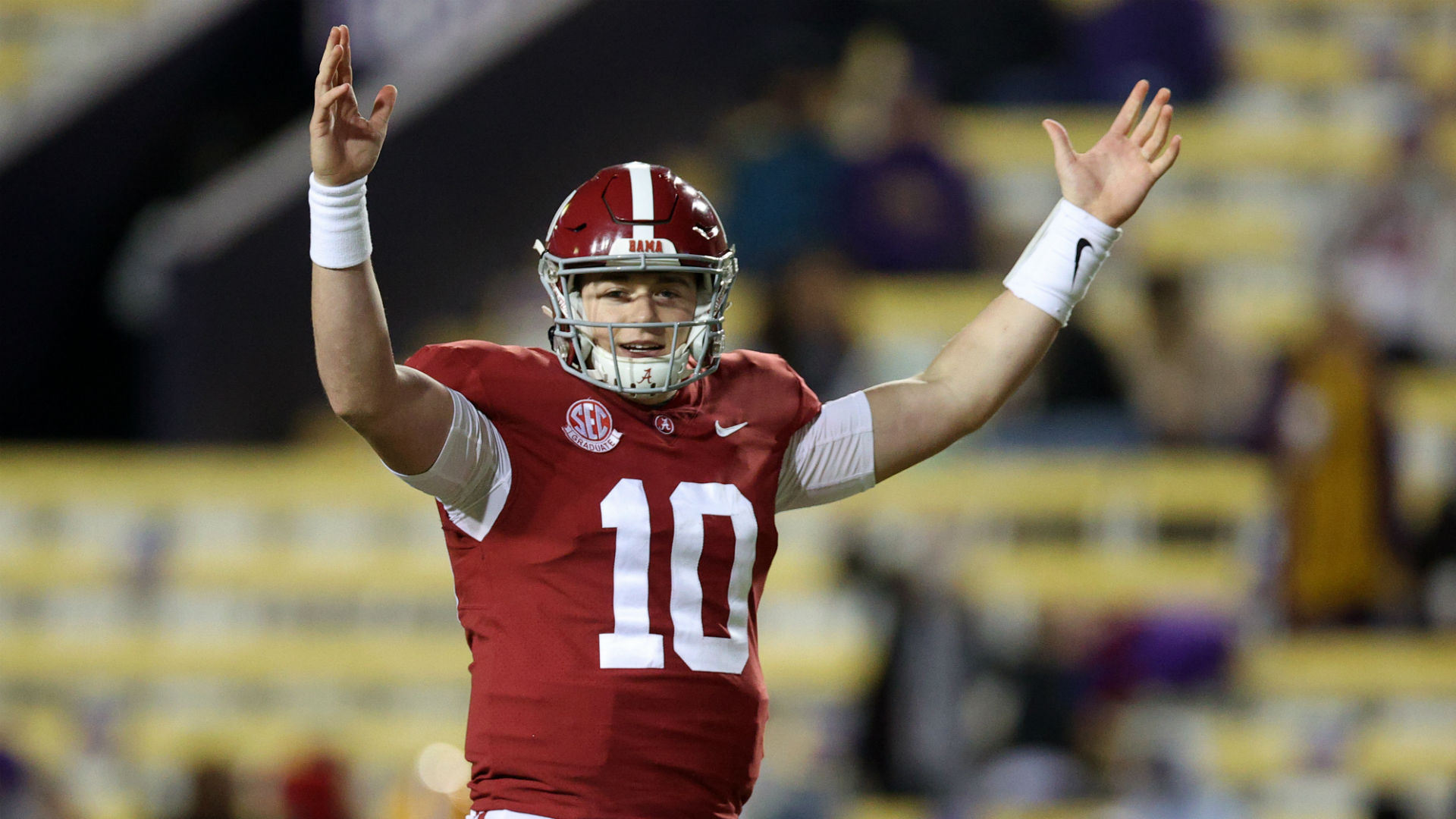 Mac Jones had a Joe Burrow-like season in succeeding Tua Tagovailoa as Alabama’s starting quarterback, leading a second straight national championship run for an offensive juggernaut from the SEC West. He played so well in 2020, he played his way into first-round NFL draft status — something both Burrow and Tagovailoa enjoyed last year.

Jones was masterful in bringing together a loaded attack featuring first-round wide receivers DeVonta Smith (the Heisman Trophy winner) and Jaylen Waddle with support from powerful running back Najee Harris. Jones was hyper-efficient in throwing for 4,500 yards and 41 TDs (to only 4 INTs) in 13 games. He completed 77.4 percent of his passes at 11.2 yards per attempt with a passer rating that would have converted to 143.0 in the NFL.

Jones doesn’t have the same type of jaw-dropping arm of Clemson’s Trevor Lawrence or BYU’s Zach Wilson, the consensus 1-2 prospects in the 2021 class. He doesn’t carry the athleticism of either Ohio State’s Justin Fields or North Dakota State’s Trey Lance.

But he’s an appealing mix of all the traits to perform and win at a high level in the NFL. He can still make all the throws, delivers the ball with accuracy and makes quick, smart decisions. He’s got high football intelligence but he’s a grinder at the same time. Jones has been tabbed as a “pure pocket passer”, but he’s a capable athlete when needing to extend plays by sidestepping the pass rush.

Jones won’t be a dual threat in the NFL, so he needs to get into a superior passing system that maximizes his mental strengths and intangibles. With that in mind, here’s a breakdown of his ideal landing spots on the night of April 29:

The Raiders have taken Alabama offensive skill players in the first round of the past two drafts (wide receiver Henry Ruggs III, running back Josh Jacobs). Derek Carr is arguably coming off his best season, but there are easy outs from his contract with significant salary-cap savings this year and next before he becomes a free agent in 2023.

Jones would operate well under Greg Olson and Jon Gruden in reuniting with Ruggs and Jacobs. He would excel at spreading the field and like Carr, would have a natural connection with tight end Darren Waller. Carr has been solid and efficient, but despite his high floor at QB, he’s kept the Raiders short of their offensive ceiling. Jones can push them to another level with their big-play targets.

Carr also is bound to get a lot more expensive for an extension. Should Jones still be available, he would be the ideal QB to stash and groom to take over for Carr ahead of the 2022 season.

The 49ers have a terrific system with Kyle Shanahan that produced an MVP season from Matt Ryan in 2016 and has gotten the best out of Jimmy Garoppolo’s passing skills. Kirk Cousins isn’t headed to San Francisco, so Jones becomes the top option to replace Garoppolo. The 49ers, just like the Raiders with Carr, have easy outs from Garoppolo’s contract the next two years with even more significant cap savings.

Jones would take full advantage of having George Kittle, Deebo Samuel and Brandon Aiyuk as his trio of top dynamic targets. He also would handle the diversity of Shanahan’s passing game and play well off a strong running game, knowing he has a stud left tackle in Trent Williams.

The Steelers restructured Ben Roethlisberger’s deal to keep him for a starter for one more year, but it’s clear he showed signs of massive physical decline last season and needs to be replaced as soon as 2022. For now, offensive tackle and cornerback might be bigger priorities, but should Jones slip past No. 20, the Steelers need to think hard before passing on Jones, who has the ideal makeup to be Big Ben’s true heir apparent.

This is another team loaded with wide receivers and should get more impactful at running back in 2021. The Steelers will be limited for breaking through big in the playoffs with Mike Tomlin again as long as they keep rolling out Roethlisberger. If not Jones, they would need to think about stashing Florida’s Kyle Trask in the second round.

Ron Rivera and Scott Turner are going with Ryan Fitzpatrick as their latest bridge starter to replace Alex Smith, but he hasn’t been guaranteed a starting job. Although Kyle Allen and Taylor Heinicke hope they can compete for it, Washington needs to think about a better pedigreed youngster to polish in a rising young offense with Terry McLaurin, Curtis Samuel, Logan Thomas and Antonio Gibson.

The same attributes that made Fitzpatrick appealing are in Jones, only in a younger, more talented body. Jones’ cerebral and hard-working nature would mesh well with Rivera and Turner and he also can execute all the throws with good skill support.

The Vikings are tied to Kirk Cousins’ contract for 2021, but ahead of 2022, they can get out of it with $10 million in dead money vs. $35 million in cap relief. Cousins is already set to become a 35-year-old free agent in 2023 after last year’s extension.

Setting up Jones to succeed him would a be a good plan to ease their mini-rebuilding transition. Rick Spielman and Mike Zimmer have to give Jones some consideration, but he would likely be a better pick out of a trade down. The Vikings will need to think about offensive line, linebacker and edge rusher, too,  while weighing whether they should instead go for near future at QB.

The Patriots seem intent on running a different style of offense featuring a running QB playing off a power offense coming out of two-tight end sets. But they also could be using Cam Newton as a pure convenient bridge while they think about more of a “efficient point guard” at quarterback, one who can distribute the ball all over the field with accuracy with the smarts to absorb Josh McDaniels’ complex system.

Jones would love this as a big Tom Brady fan and emulator. He comes into the NFL with the same grinding nature as Brady only with a more polished skill set, better athleticism and established winning pedigree. OK, let’s not say he’s the next Brady — like Tagovailoa has mildly suggested  — but Jones could please Bill Belichick plenty while helping the Patriots better compete with Tagovailoa’s Dolphins and Josh Allen’s Bills in the AFC East.