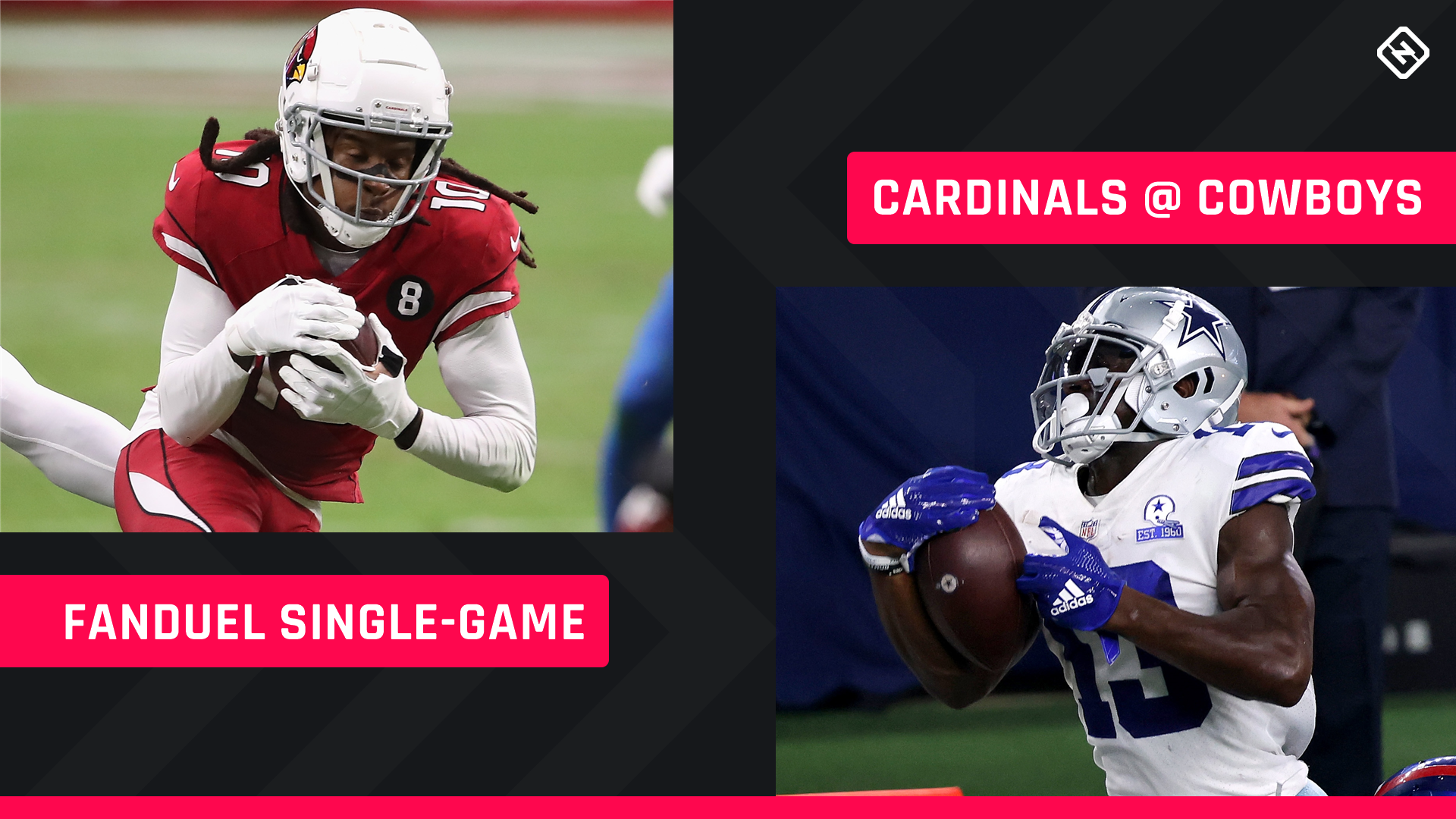 Andy Dalton is getting ready for his first start in a Cowboys uniform. Dalton and the Cowboys are taking on Kyler Murray and the Cardinals in what should be an entertaining Monday Night Football clash in Week 6. Daily fantasy football players have to be excited about this contest, as it figures to be an offensive shootout, which means there will be plenty of value plays and sleepers to trust. Our FanDuel single-game DFS lineup is targeting one of those potential value plays while also using a QB-WR-WR stack from one of the teams to hopefully ride to victory.

Our strategy here is banking on a shootout. We’re avoiding RBs and focusing solely on QBs and pass catchers. That may come back to bite us if one team gets up big on Monday night, but if it’s a close, back-and-forth, high-scoring game, then this lineup could easily get over the cash line.

Kyler Murray will be a popular pick here, and for good reason, but we’re going with Murray’s No. 1 weapon as our MVP instead. Hopkins has seen 10.6 targets per game, good for fourth in the NFL, and gets to go up against a Cowboys team that has allowed the third-most FanDuel points per game to WRs this year (39.1). Hopkins should eat into a good chunk of that average, and he could be a big TD threat against a defense that has allowed 1.8 TDs per game to  WRs, good for second most in the NFL behind the Vikings.

Murray is a must-have in lineups against the Cowboys even though we’re fading him as the MVP. Murray has yet to log fewer than 23.12 FD points in an outing, and his rushing floor will make him a big-time weapon against Dallas’ weak defense. The Cowboys will have trouble containing him and unless they can somehow pressure him a lot, Murray will be able to make big downfield plays or scramble for yardage consistently. Feel free to trust him as the highest-priced player on the slate.

We wanted to counter our top Cardinals pass-catching stack with one of the Cowboys’ top weapons presuming that they’ll either have to play catch up or go blow-for-blow with the Cardinals in this one. The cheapest of the top-three Dallas weapons is Gallup, which makes sense given that he’s a deep threat and isn’t always consistent. That said, Gallup has at least 50 yards in all but one of his games this year, and he could prove to be a solid play if Arizona focuses on covering Amari Cooper and CeeDee Lamb.

We’re really stacking up on the Cowboys’ defense here. Simply put: Dallas just doesn’t defend well, as they allow a league-high 36 points per game. Kirk has at least 7.0 FD points in his last three outings and has become increasingly involved in the Cardinals offense, as he has commanded 12 targets combined the last two weeks. He should continue to get looks often against the Cowboys and has the chance to break a long TD. The presence of him and Gallup gives this team a lot of upside because of their big-play ability.

To be able to pay up for Murray and Hopkins, we had to spend down at one spot. Thus, we’re taking a gamble on Wilson. Can you really expect a lot from Dallas’ fourth receiver? Probably not, but maybe he breaks out again. Wilson had a two-TD game against the Seahawks a few weeks back and has seen 10 targets in recent weeks for the Cowboys. He could fly under the radar, and all he’ll need is a few catches or one score to pay off in this lineup. You surely could pivot off him and Kirk for a Dalton Schultz/Chase Edmonds pairing, but I prefer Kirk’s upside, and Wilson has proven to be a decent low-budget play at least the last few weeks.