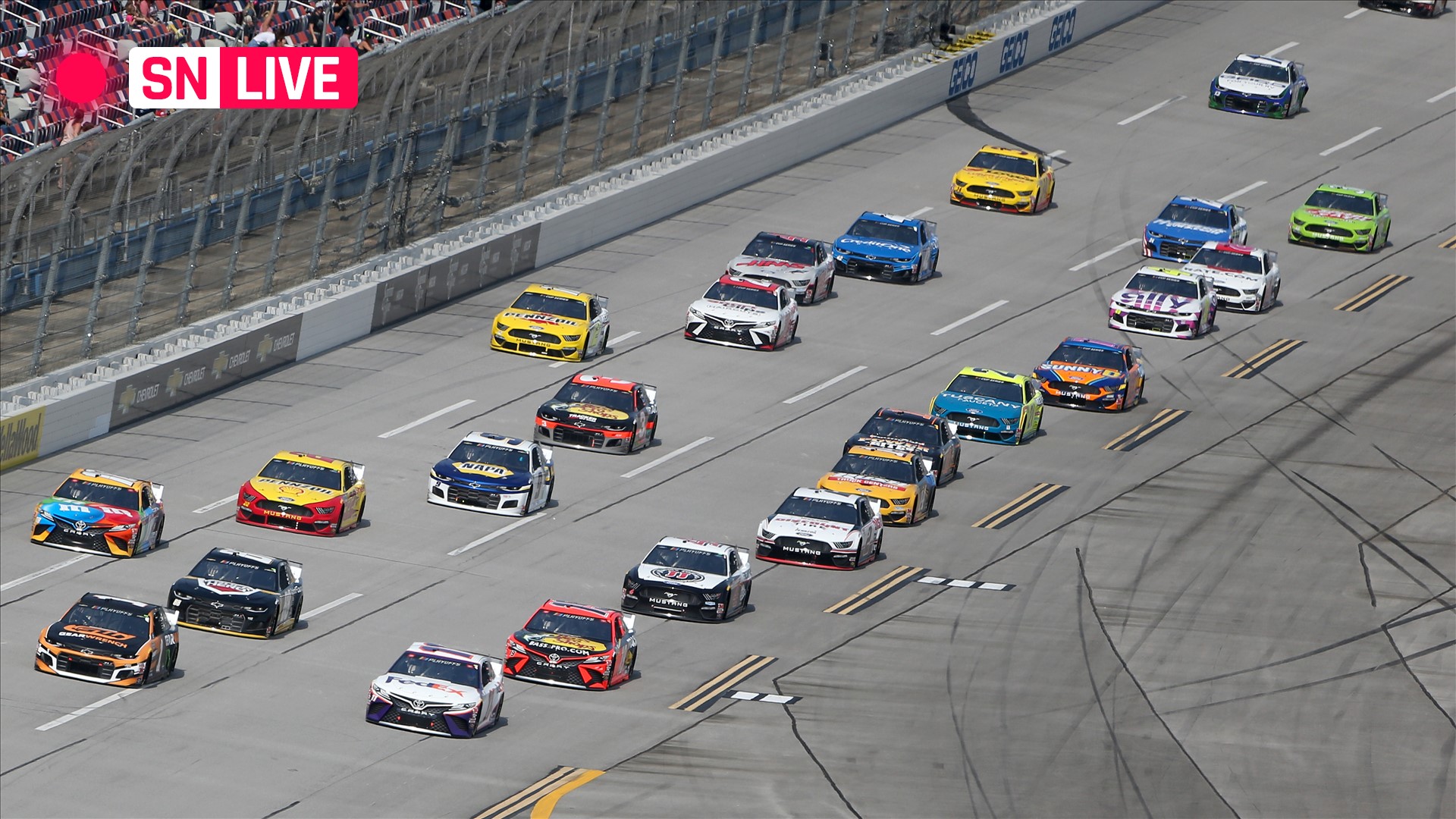 Denny Hamlin passed Matt DiBenedetto just ahead of the finish line to win the YellaWood 500 at Talladega on Sunday.

Hamlin had avoided damage throughout a chaotic race by hanging back, safely biding his time as much of the field crashed ahead of him. There were a track-record 13 cautions.

Hamlin was forced below the double yellow line while entering the final stretch as vehicles collided in his vicinity.

DiBenedetto, no longer in the NASCAR playoffs, was racing for his first career victory and his NASCAR future. He became emotional during his postrace interview, unsure about his 2021 prospects.

Playoff drivers Kurt Busch, Kyle Busch and Aric Almirola did not finish the race because of damage to their cars. Kurt Busch has already clinched a spot in the Round of 8, but the latter competitors essentially need to win at Charlotte next weekend to stay alive.

Sporting News tracked live updates and lap-by-lap highlights from Sunday’s NASCAR race at Talladega. Follow below for complete results from the YellaWood 500.

Denny Hamlin was sixth in line at the white flag. And won anyway in a photo finish.

6:30 p.m.: When we return to green, Matt DiBenedetto will start in first place. Elliott had to pick up fuel.

6:23 p.m.: Caution. Again. We’ll have a third OT. Wallace tried to be aggressive. He found the wall, not the lead.

6:11 p.m.: As officials continue to clean debris off the track, Kyle Busch conducts a dejected interview. He’ll be eliminated if he doesn’t win next weekend.

6:05 p.m.: It appeared Elliott went beyond the yellow line to move into the lead, but NASCAR rules Logano forced him there.

6 p.m.: Elliott makes a huge push but a crash behind the leaders brings out the yellow flag. Kyle Busch among the drivers knocked out by the wreck.

5:17 p.m.: Caution. Johnson sheds debris for the second race in a row.

“Well, this should piss the haters off. HAHA!” @BubbaWallace radios to his team while leading.

Getting stage points in Stage 2:

The penalty is he’ll have to start at the tail end of the field for the restart and CANNOT receive points this stage, so he dropped back.

4:33 p.m.: Here’s the view of the incident from Brad Keselowski’s perspective.

4:28 p.m.: The frontstretch fence needs repairing after the wreck, meaning the red flag could be out for a while.

4:28 p.m.: Sounds like Kurt Busch came out of that scary crash without significant physical damage. His car flew into the air during the chain reaction of collisions.

Suarez, Gaughan, KuBusch, Bowyer all out of the race.

#NASCAR .. Clint Bowyer is out of his car. He’s done. So he will remain outside a transfer spot going into next week’s elimination race at Charlotte Roval

4:20 p.m.: Huge wreck. Probably bigger than the big one before. Kurt Busch at the center of it.

4:19 p.m.: Elliott falls behind Jimmie Johnson, who becomes the 13th leader of the race.

4:18 p.m.: Elliott needs to hang onto his lead for 15 more laps to claim Stage 2 and the vital points that would come with it.

4:06 p.m.: Back to green after Blaney’s right tire issue is sorted out.

3:33 p.m.: Caution. Kyle Busch has a tire problem and leaves debris on the track.

3:20 p.m.: It’s unclear whether Kyle Busch will be able to continue, but regardless this is a bad sign for his playoff hopes. He was already on the wrong side of the advancement bubble.

3:15 p.m.: Big wreck before the end of Stage 1. Kyle Busch and Aric Almirola among those with damage. Clint Bowyer’s spotter proved prophetic after telling Bowyer a couple of minutes ago that “they’re trying to wreck.”

3:09 p.m.: Logano claims first place. The top of the field has been quite fluid this afternoon. There are 10 more laps in Stage 1.

Elliott to the rear for speeding on pit road.

2:38 p.m. Hamlin makes an aggressive move to take back the lead.

2:30 p.m.: As soon as the race goes green there’s a third caution in the first 12 laps. Corey LaJoie’s car stalled.

2:21 p.m.: ANOTHER WRECK. Ricky Stenhouse Jr. takes severe damage. This race is going to take 10 hours at this pace.

Two wrecks in the first nine laps…179 laps to go!

Caution…crash…Ricky Stenhouse Jr. He’s trying to drive it back, but pretty sure he’s done. His chances at another superspeedway win are finished.

The Round of 12 NASCAR playoff race at Talladega on Sunday should begin soon after 2 p.m. ET. The temperature is supposed to be in the 70s, and rain is not in the forecast.

The race is 94 laps spread over three stages and will become official after Lap 47. The distance of the race is 500 miles.

Among active Cup Series drivers, Brad Keselowski has performed best at Talladega. He has five wins in 23 races. No one else has more than three victories.

The starting lineup for Sunday’s race at Talladega was determined by NASCAR’s new formula for setting lineups in races without qualifying. The same procedure will be used through the NASCAR Cup Series playoffs.

The formula produced this starting lineup for Sunday’s NASCAR race at Talladega: