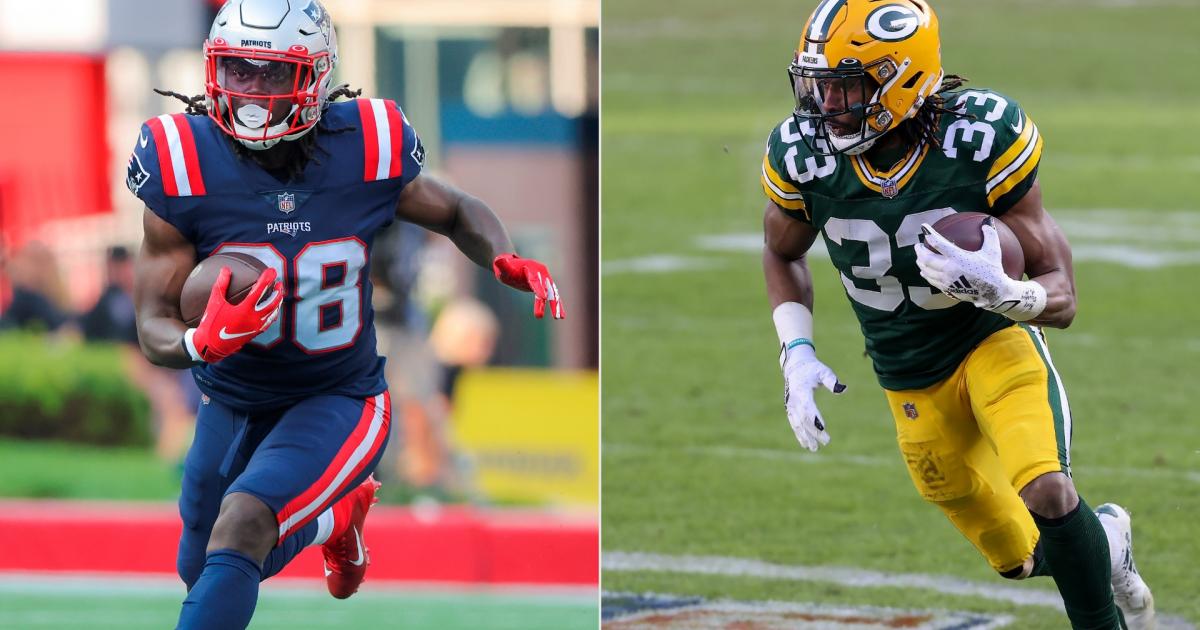 After a much-needed road victory over the Buccaneers in Week 3, the Packers return home to face the 1-2 Patriots in Week 4 (4:25 p.m. ET, FOX). Sunday marks the first time these two franchises have met since Tom Brady left the Patriots in 2020 and the 12th meeting all-time.

Entering this Week 4 matchup, New England will be without starting QB Mac Jones after Jones suffered an ankle injury in the latter stages of the Patriots’ 37-26 loss to the Ravens in Week 3. In Jones’ place, backup QB and NFL journeyman Brian Hoyer gets the starting nod. Sunday will be Hoyer’s 40th career start (16-23 record in those games). Also on the injury front for New England, WR Jakobi Meyer’s status is uncertain after he failed to suit up last Sunday due to a knee injury.

Green Bay clearly put its Week 1 loss to Minnesota in the rearview, posting back-to-back wins to get the Packers right back in the NFC North race. While it didn’t necessarily translate to the scoreboard, Green Bay’s offense was effective enough against a well-rounded Buccaneers defense, logging 315 yards on 5.2 yards per play in last Sunday’s 14-12 win. The Packers could have easily scored 20-plus points had Aaron Jones not fumbled on the Buccaneers’ one-yard line in the second quarter. Can the Packers do enough to get to 3-1 in the early season?

Below, we’ll give you all the information you need before placing a wager on Packers-Patriots, including the updated odds from Caesars Sportsbook, tips, and our prediction for this Week 4 late-afternoon matchup.

Green Bay sat as five-point home favorites on the look-ahead line, but following the injury to Jones coupled with the Packers’ Week 3 road win in Tampa, the Packers have been bet up to 9.5-point home chalk. The total has seen some movement after opening around 42.5 points, settling at 40.5 points.

— Green Bay continues to be a covering machine, sporting an impressive 14-6 ATS mark over its past 20 games.

— The Patriots are 0-4-1 ATS in their past five games, with their last cover coming in Week 17 of last season.

Take advantage of BetQL’s 3-day free trial and see all of our best bets across all sports, including college football, NFL and MLB!

Three things to watch for

Which Patriots’ WR steps up on Sunday?

While it’s likely the Patriots lean on their ground game even more so this Sunday, they’re still going to need to make plays through the air in what projects to be a negative game script. The past two weeks have seen WRs Nelson Agholor (six catches, 110, yards, TD in Week 2) and DeVante Parker (five catches, 156 yards in Week 3) step up in the passing game. If Meyers sits out for a second week, which WR leads the team in receiving? Do we see Hunter Henry or Jonnu Smith make an impact in the passing game, as well?

Given we see a high dosage of early-down runs by the Patriots with the intention of making things easier for Hoyer on third down, can the Packers’ defense force three-and-outs or will they be on the field for long, methodical drives? Entering Week 4, the Packers lead the league with a 22.6-percent opponent third down conversion rate. If the Packers can maintain that clip, they’ll be in a really good spot to get to 3-1.

Green Bay’s two-headed backfield was unable to much on the ground last Sunday, as Jones and Dillion combined for 68 rushing yards on 24 carries. Some of that can be attributed to Tampa Bay’s ability to limit the run, but can the Packers get back to establishing the ground game to make life easier for Rodgers and company? New England’s defense sits toward the middle of the league against the run, allowing 344 total rushing yards on 4.8 yards per carry. That number is a bit inflated after New England allowed 107 rushing yards to Lamar Jackson last week, as not many defenses can hold him in check on the ground. Can the Packers RBs get things rolling on the ground?

130. That’s how many passing yards Brian Hoyer threw for in his last start with the Patriots back in Week 4 of 2020. Hoyer completed 15-of-24 passes for 130 yards (5.4 YPP) in the Patriots’ 26-10 loss against the Chiefs in Arrowhead. Hoyer wasn’t asked to do too much, as the Patriots relied on their ground game and defense to keep things close. The final score wasn’t indicative of how close that game really was, as New England trailed the Patriots by just three points early in the fourth quarter. A similar game script seems likely this go-around with Hoyer at the helm.

Not having Mac Jones is crucial in the Patriots’ chances of staying competitive, as indicated by the Packers sitting as near-double-digit favorites. New England’s defense is capable of keeping it competitive, but with its offense being close to one-dimensional, it’s unlikely the Pats keep up with the Packers over four quarters. Green Bay will wear the Patriots down over 60 minutes and secure a double-digit victory in the process.