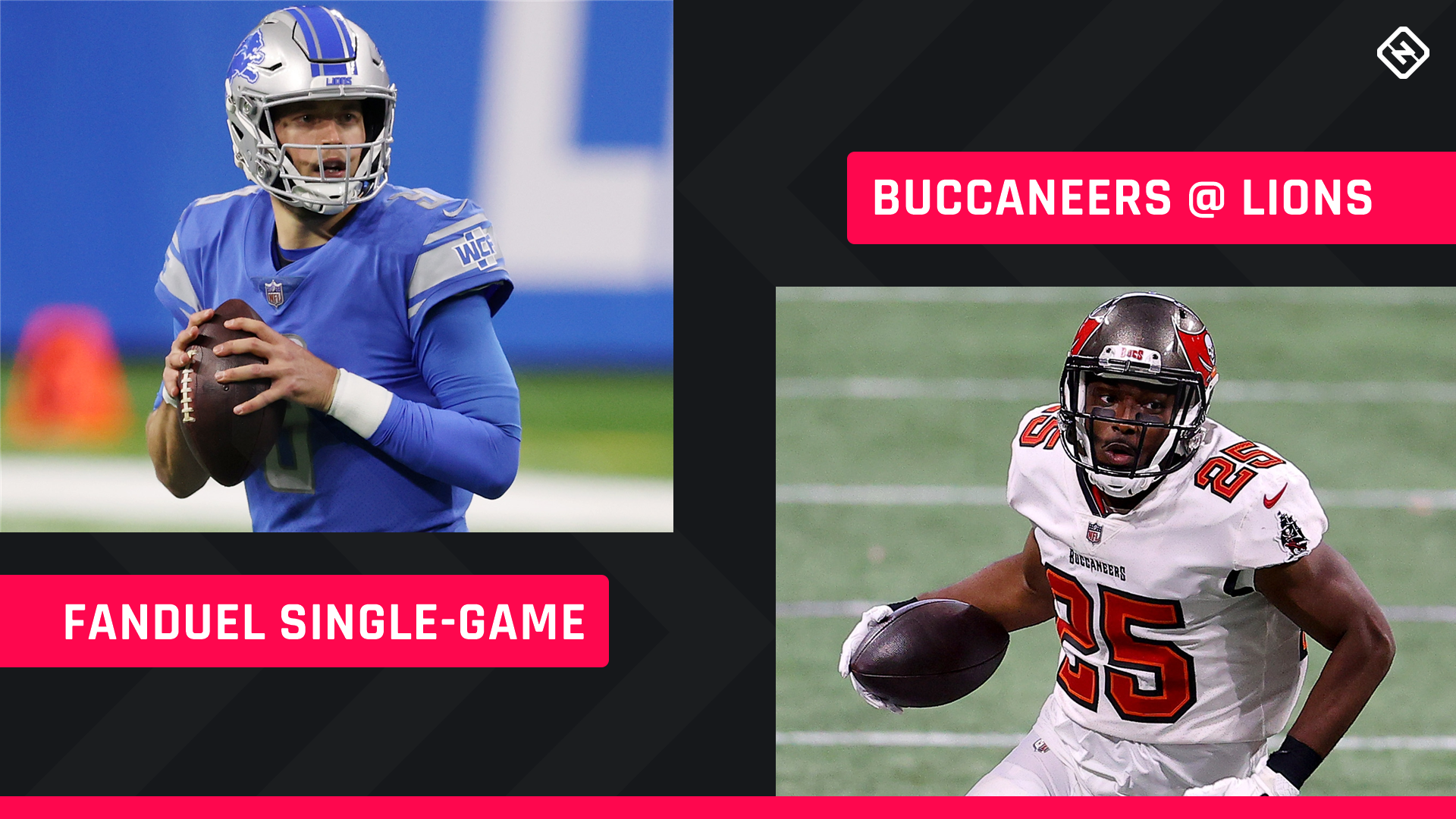 The Buccaneers are looking to win their 10th game of the season on Saturday, which would mark the first time since 2010 they’ve reached double-digit wins. Meanwhile, the Lions may be without their interim head coach as a result of COVID protocol and are already well out of the playoff race. This game could turn into a blowout, but the Lions have enough offense to make things interesting. Either way, there will be many ways for NFL DFS players to build their lineups, and our FanDuel Single-game approach is targeting both QBs and one team’s major defensive weakness to build our lineup.

That weakness would be the Detroit run defense. It hasn’t performed well all year, so that’s part of why we have two Tampa RBs in our lineup. There are numerous ways to pivot to other key contributors if you aren’t a fan of this lineup’s approach, but if all goes well, we should have a good chance to cash with this five-man squad.

There are no shortage of good MVP options on this slate, including the two QBs and the many receiving weapons on each team, but Leonard Fournette has too good a matchup to pass up. The Lions rank last in fantasy points allowed to RBs this year and have given up a league-high 25 TDs to the position. For context, no other team has allowed more than 18. With Ronald Jones (finger, COVID) out last week, Fournette played 66 percent of the Bucs’ snaps and saw 19 touches compared to Ke’Shawn Vaughn’s two and LeSean McCoy’s three. Fournette also managed to find the end zone twice and score 20 fantasy points, and that was against a much strong Falcons run defense. He should feast in this matchup, so we’ll roll with him as a top option here.

Like Fournette, Brady could also feast. The Lions have given up the fourth-most FanDuel points to QBs this year, and in recent weeks, they have been awful at containing passing attacks. In three of their past four games, the Lions have allowed at least 273 passing yards and three TDs, and the one time they didn’t came against Mitchell Trubisky. Brady should be poised for a strong day, and he has at least two TDs in his past five games. He can be trusted as a high-floor, high-ceiling option here, as he’ll stay in the game (and produce) even if this turns into a blowout.

Stafford deserves a lot of credit for how he played against the Titans while nursing a painful rib injury. To reward him, we’ll include him in our FanDuel lineup! In all seriousness, this projects to be a pass-heavy game plan for the Lions, as they will likely be playing from behind. They’re also facing a Buccaneers team that has allowed the fewest rushing yards to RBs this season. By having Brady and Stafford, we’ll capitalize on all passing production in what could be a high-scoring game. Stafford is a bit of a risk given his injuries, but the Bucs have given up three massive games in recent weeks to Jared Goff, Matt Ryan, and Patrick Mahomes. All had at least 356 yards and three TDs. Stafford could post similar numbers, especially if he’s playing from behind.

Jones, Chris Godwin, Antonio Brown, T.J. Hockenson, and Rob Gronkowski were all available in this price range, but we ultimately decided to pair Jones with Stafford. Jones has been on a tear ever since Kenny Golladay exited the Lions’ Week 8 game with a hip injury. Since that time, he has averaged 8.9 targets, 5.8 receptions, and 69.1 receiving yards while recording six TDs. In two of his past three games, he has posted at least 112 yards and a TD, and he might have a chance to do that against the Bucs. Tampa Bay has allowed five TDs to WRs in its past three games. If Jones can take advantage while racking up some yardage, he should pay off easily here. Stacking him with Stafford is a high-upside move.

To afford so many expensive options for this lineup, we had to spend all the way down for one low-priced player. That ended up being McCoy. As stated earlier, the Lions have been awful against RBs all year, so if McCoy plays even just a little bit behind Fournette, he could end up breaking a big run, scoring a TD, or catching a long pass. He had three catches for 32 yards against the Falcons last week, and if he spells Fournette as a receiver, he could rack up some catches from Brady, who loves throwing to RBs out of the backfield. McCoy is a risky selection, but at this bargain price, he’s worth a shot, and he will earn us some lineup differentiation, as few will want to spend down this far for any player.