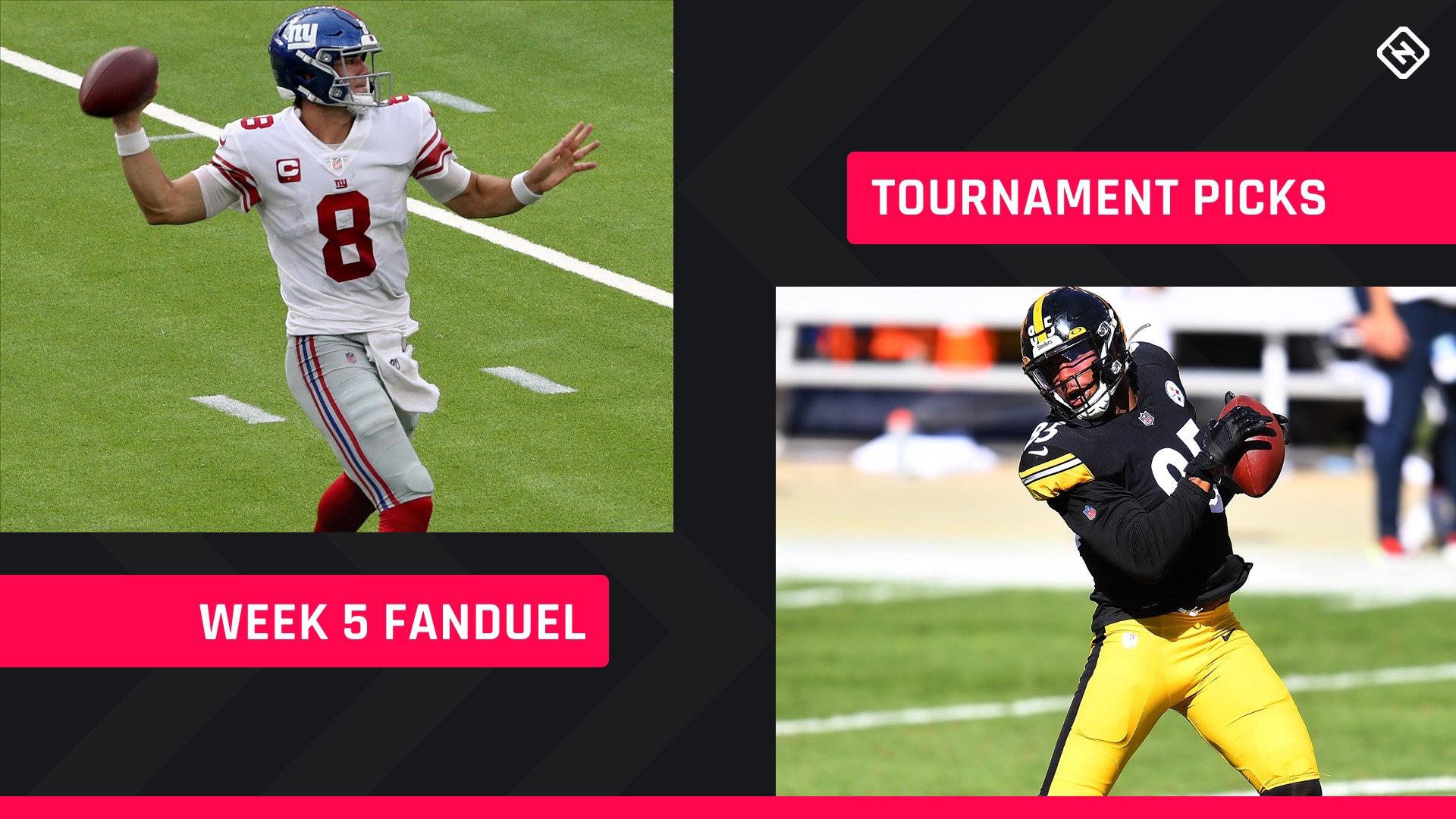 Daniel Jones hasn’t lived up to his top-10 pick status in most weeks during his young NFL career. In Week 5, though, we’re predicting that Jones will, and that’s why he’s the quarterback in our Week 5 FanDuel GPP lineup. The Cowboys haven’t proven they can defend anyone, so if Jones is ever going to deliver for daily fantasy football players, it’s this week.

There’s also a bit of a studs-and-scrubs element to our lineup, which has allowed us to play Ezekiel Elliott, DeAndre Hopkins and Tyreek Hill. That’s some seriously high upside if they go off and Jones delivers on his end of the bargain.

I’m not saying the Giants are the Browns, but the Browns just dropped a 49-spot on Dallas. The Cowboys can’t defend anyone, and that means they end up in shootouts. Even Jones, who has not impressed in the early going, will find his way to a solid fantasy day against Dallas at what promises to be lower ownership.

After Taylor’s big Week 2, he’s had two relatively quieter weeks. That sets up nicely for us to use him in a game against a Cleveland team that’s allowed four rushing touchdowns through four weeks while also giving up nearly 50 receiving yards to RBs per week. Taylor should get back toward the century mark in this one.

Harris is a beneficiary of FanDuel’s Week 5 pricing being done before Harris ran for 100 yards on Monday night. That might make him a popular play, even in tournaments, but he allows our lineup so much flexibility that we’re going to use him anyway. We aren’t even at that huge a risk of the Patriots choosing to do something weird with their running game with Sony Michel (quad) on Injured Reserve .Even if they do, Harris’ price is so low that it won’t kill our lineup.

When Danny Dimes throws touchdowns, they’re often to Slayton. And in Week 5, like we said above, Jones will likely throw touchdowns. Dallas has already allowed a league-high nine receiving touchdowns to WRs through four games; Slayton has a solid shot to add to that total.

Hopkins is a strong play in any format this week against a Jets team that will struggle to slow down Arizona’s offense at all. You won’t want to miss out on a big game from the slate’s highest-priced receiver if you can afford not to.

While being one of the NFL’s top receivers, Hill remains a great tournament play because of his big-play capabilities. Paying down at QB has allowed us to pair Hopkins and Hill, something few others on the slate will have due to their prices. If they both pop, we’ll be sitting pretty.

The Eagles have allowed the third-most fantasy points to tight ends this season, including five touchdown grabs already. Ebron is nothing if not a TD threat, so he’s a solid stab at this price for Week 5.

As Jones and Slayton try to mount a comeback through the air, Zeke will look to run out the clock on the other side. This is likely one of the only lineup constructions with Elliott/Hopkins/Hill, and stacking a tournament lineup with a handful of big names can pay off in a big way if they all have their peak games at once.

Las Vegas’ receiving corps is still dinged up, and Derek Carr’s lack of shot-taking means there’s not a huge downside here. The Chiefs don’t have a great run defense but will be able to key on Josh Jacobs enough to set up for a near shutout.