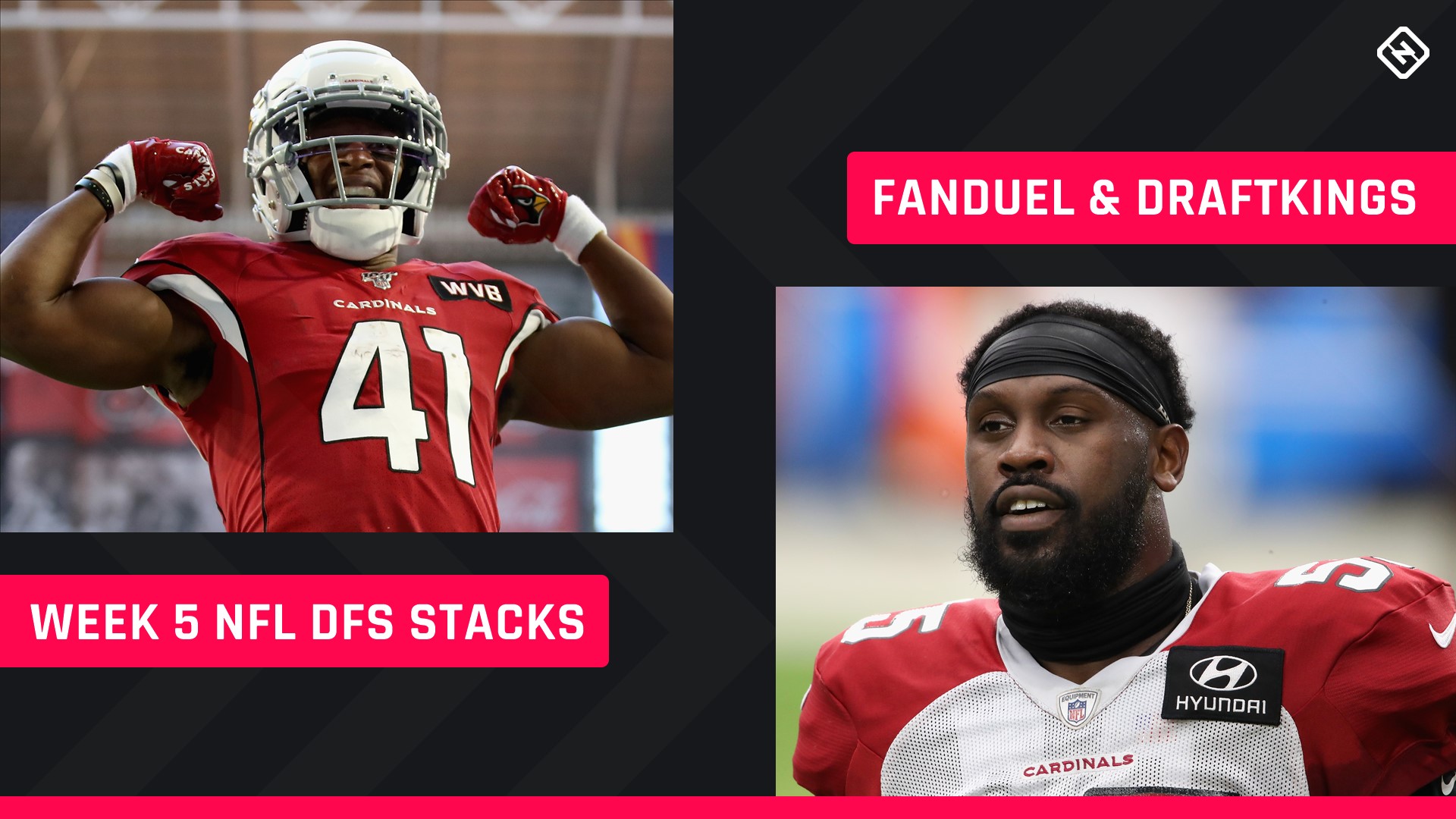 Stacks aren’t necessarily needed in NFL DFS cash games, but in order to win a GPP tournament on DraftKings or FanDuel, you need to embrace the strategy of pairing teammates who complement each other. Heading into Week 5, we have some crazy stacks for daily fantasy football players to consider, including a Panthers trio that doesn’t even feature D.J. Moore or Robby Anderson.

This could be a week to consider game-stacking in a couple of spots, with the most obvious being the Giants game at the Cowboys, where it’s likely neither defense will show up to play much at all.

There are a whopping total of zero things about the Jets that seem intimidating. It took them a whole half to figure out how to stop Brett Rypien, of all people. Something tells me they won’t find an answer for Murray and Hopkins.

Hopkins has paired with Murray in this space before, and so far he’s been as advertised. New York doesn’t have a cornerback worthy of attempting to guard Hopkins, who will likely have a monster game to rub the firing of Bill O’Brien in the Texans’ faces a little longer.

Murray also brings a rushing element to the table, which he showed off on a 48-yard rushing score in Week 4. That increases his chances of being involved in every Arizona touchdown, and Hopkins will surely find his way to at least one, too.

It could even pay off to use both Cooper and Lamb in cash games, but sometimes the trio stack puts a bit too much risk into a cash lineup structure. The key point here is Prescott — he’s on pace to shatter the NFL’s single-season passing yardage record by more than 1,000 yards. He’s thrown for 450 or more yards in three straight weeks, for crying out loud.

Nope, we’re not getting too cute in our cash stacks this week. Too many top quarterbacks have matchups worth exploiting, which both means the ownership will be somewhat spread out. It also means it’s not worth going away from all the studs with good matchups.

Kelce makes just a little more sense in cash games, as Tyreek Hill has more boom-or-bust to his game. Both are worthy considerations, though. And the reason we like this more on DK than FD is that while FanDuel’s pricing at other positions is about the same, the site prices the best quarterbacks relatively higher in a way that can make constructing the rest of your lineup around Mahomes tougher.

Just using Jones and Slayton together can work as a FD stack, but if you want to play on DK, it makes sense to add Tate to take advantage of the full PPR scoring. Evan Engram is also in play because he’s been enough of a disappointment that his ownership should stay low.

The big key here is that Jones delivers on what is a mightily favorable matchup. The Cowboys’ defense can’t stop anyone and was just absolutely torched by Baker Mayfield and co. to the tune of 49 points. If Jones can lead the Giants’ offense to 30 points — a big ‘if’ but one worth chancing — he’ll be a worthwhile QB play in tournaments for sure.

Drake has likely ticked off everyone who’s used him so far this season by not delivering on his preseason promise, and an injury scare in Week 4 could keep a few more DFS players away. But a matchup with the Jets can cure all ills, and with low ownership at a price that’s continued falling, Drake still has tournament-winner potential.

Pairing him with a defense that will get to face either Sam Darnold or Joe Flacco is a no-brainer. Chandler Jones is surely licking his chops at the opportunity to chase after one of those passers.

If you’re looking for an out-there stack, this is it. The Falcons have allowed the most fantasy points this season to both quarterbacks and tight ends, so pairing Bridgewater and Thomas isn’t too, too crazy. But Thomas hasn’t contributed much himself this year, so playing him is a leap of faith on its own.

Then we add in Davis. The reasoning there is simple: Bridgewater has heavily involved Davis as a receiver, so more than most QB/RB pairings, this one has the potential to aid Bridgewater, too. Carolina has a case as the underdog in this game despite playing a winless Atlanta team, so throwing should be in order against an injury-ravaged Falcons secondary.