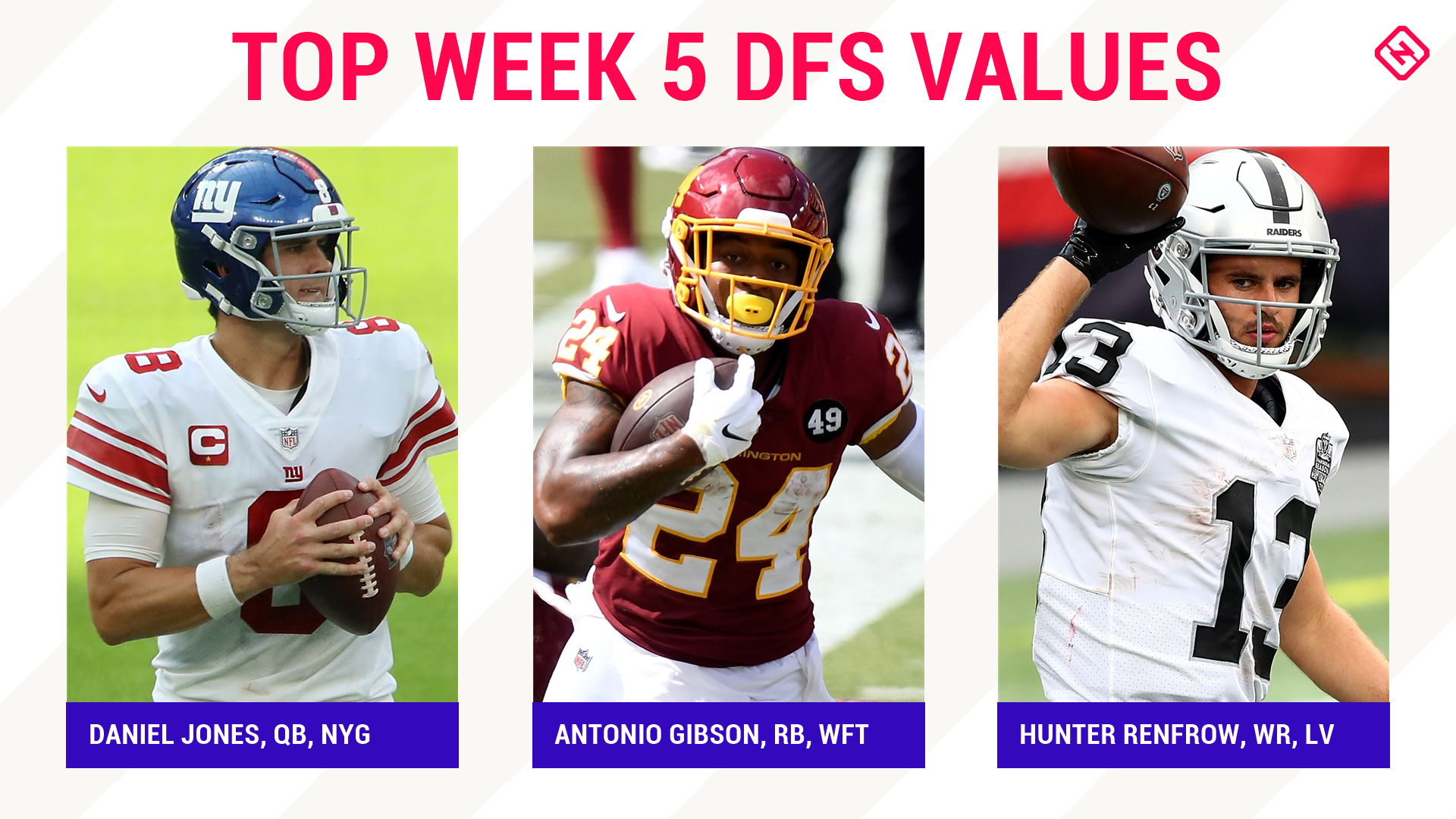 Through four weeks, we have a good read on which teams we can exploit for daily fantasy football purposes. The Cowboys, Falcons, and Jets are all high on the list, so it’s no surprise that opponents of all three are featured in our top Week 5 DFS values column. Finding the right under-the-radar sleepers is key in FanDuel and DraftKings tournaments, as values at one position affords managers higher spending limits at the other skill positions, so we’re once again highlighting players across various price points to target this week.

If you read this column last week, you would have benefited from our advice to plug in QBs Derek Carr and Gardner Minshew, WRs Tyler Boyd and Justin Jefferson, and TE Darren Waller, among other high-value plays. RotoQL constantly monitors DFS pricing, and provides the most up-to-date insight and analysis to maximize your lineup success.

As always, fantasy owners can read Week 5 previews and fantasy prediction articles 24/7 on BetQL, find out which side the pros are betting on their NFL expert picks dashboard, follow all the NFL public betting data, and build DraftKings lineups on RotoQL.

Let’s get int our top Week 5 DFS value plays, and you can get an idea of why 100,000 DFS players trust RotoQL to build lineups. Optimize, find value plays, and increase your chances of cashing today!

With each passing week, Teddy B has looked more comfortable with his new offense in Carolina. He completed 27-of-38 passes for 279 yards and two touchdowns in the Panthers win over Kyler Murray’s Cardinals last week. He has developed an obvious rapport with fellow offseason acquisition Robby Anderson (28 catches on 34 targets, 377 yards, TD), and his chemistry with D.J. Moore and Curtis Samuel seems to be improving. Atlanta gives up the most fantasy points in the NFL to quarterbacks, and the over/under opened at 51 points for this game. Bridgewater offers a lot of value at these prices.

At this rate, it has to at least cross your mind to utilize whichever quarterback faces Dallas each week. We thought maybe the Cowboys would wake up defensively last week, but instead they gave up 34 straight points and lost 49-38 to the Browns. They allow the sixth-most fantasy points to QBs, so Jones will be well worth consideration at these prices. He’s due for some positive regression, as he has failed to throw a touchdown the past three games and hasn’t topped 190 passing yards since Week 2. Plug him in and cross your fingers.

Davis has capitalized mightily on his bellcow opportunity since All-Pro Christian McCaffrey went down with a high ankle sprain. The sixth-year journeyman has eclipsed 16 fantasy points in each of the past two weeks, and in CMC fashion, he’s doing it on the ground and through the air. Davis averages 4.4 yards per carry on the seaso, and 7.0 yards per reception. His snap count and carries have steadily increased each week, and he’s caught 21 of his 23 targets and found the end zone in Weeks 3 and 4. The Packers just taught us on Monday Night Football that the Falcons are generous to dual-threat running backs. Aaron Jones and Jamal Williams combined to log 13 catches for 135 receiving yards and a score, and Jones added 15 rushes for 71 yards.

With a TD in each of the past three games, Gibson’s breakout has been one of the lone bright spots in an otherwise-troubling season for Washington. Coach Ron Rivera eased the rookie into the offense early on, but with time he has featured him more and more. Used primarily on first and second-down sets earlier in the season, he now sees some third-down work. He was also heavily used in the screen game last Sunday against the Ravens, catching four-of-five passes for 82 yards. The powerful, super-talented Memphis product has great vision and breakaway speed, and should get enough work against the Rams at home to merit consideration at these prices.

The Harris era has begun in New England, but nobody on DraftKings or FanDuel seems to know yet. Pats coach Bill Belichick announced Monday that the 2019 third-round pick would be activated from the IR after recovering from surgery to repair his pinkie (trust me, it’s a real injury and not fun). He immediately replaced Sony Michel, who was moved to the IR with a quad injury. By the end of Monday, Harris had 100 yards rushing on just 17 attempts (5.9 yards per carry) in his first-career start. Harris has good vision and burst, and he broke some tackles. It’s also worth noting that the Pats had to play two backup QBs in place of Cam Newton (COVID), and they were chasing points through the air in the second half. Harris will have more volume at home with a positive game script against lowly Denver.

With the Titans’ COVID-19 outbreak turning the Steelers’ Week 4 into a bye, Johnson had extra time to recover from the concussion he sustained in Pittsburgh’s Week 3 win over Houston. That’s good news for the second-year receiver, his QB Ben Roethlisberger, and anyone who has fantasy shares of either. Johnson and Big Ben connected on 14-of-23 targets in Weeks 1 and 2 for 149 yards and a score. The Steelers host a Philly secondary that just struggled against San Francisco’s backup QBs, so a good game should be on the horizon for Johnson.

As Bengals No. 1 pick Joe Burrow has grown as an NFL QB, Cincinnati’s talented second-round pick has grown as a pro receiver. The 6-4 Clemson product has seemingly leapfrogged A.J. Green on the depth chart, and Higgins’ strength and athleticism have helped him improve on his catch rate every week. He turned a 19.4-percent target share last week into four catches for 77 yards, and he scored two touchdowns in Philly two weeks ago. The Bengals will have to throw early and often against the high-flying Ravens. Tee him up.

Look at us showing Clemson receivers love this week! Renfrow has been a steady presence as the Raiders slot man, and injuries to rookie wideouts Henry Ruggs (hamstring) and Bryan Edwards (ankle) have led to his role being expanded. He and Vegas QB Derek Carr have connected on 16-of-22 passes this season, with 11 catches for 141 yards and a TD coming in just the past two weeks. With an opening over/under of 56.5 against the reigning-champion Chiefs in KC, Renfrow will be busy.

Consider stacking the aforementioned Daniel Jones with Engram for a double-the-risk, double-the-reward gamble against the Cowboys. We all know at this point that Dallas will give up yardage through the air, and Engram commands over 20 percent of Jones’ targets. The Cowboys give up the seventh-most points to tight ends this season, and Engram is more talented than any tight end they have faced so far. RotoQL projects him to score 12.6 fantasy points, making him a superb value for any price point under $6,000.

Yes, another Panther. Thomas has just five catches for 30 yards this season, but he got into the end zone last week and received a season-high five targets. Atlanta is 28th in DK points and 31st in FD points after giving up almost 100 yards and three TDs to Green Bay’s Robert Tonyan last week, so this is a prime matchup for Thomas. Consider him a boom-or-bust GPP option, especially on DK where he’s dirt cheap.

BetQL, RotoQL’s sister product, simplifies the research process for sports bettors by equipping them with real-time line movements, value bets of the day and meaningful team trends. Check it out here!

Employing the same DFS strategy multiple times in a season only becomes lame when it stops working. Playing a competent defense against the Jets still works like a charm. The Jets yield the second-most points to fantasy defenses and struggle to contain pocket pressure. Arizona had 11 sacks through its first three weeks, as well as the No. 1 third-down defense in the NFL. The Cards took a step back last week with multiple defensive absences, including Pro Bowl safety Budda Baker (thumb surgery). Expect Arizona’s D to put in a solid effort in the Meadowlands, as long as Baker gets the thumbs-up to return to play (Dad jokes still work like a charm, too).