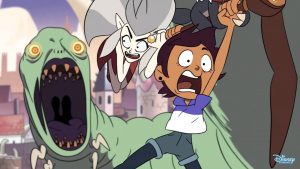 The Owl House Is Something Special From Disney

The Owl House is already shaping up within three episodes to be another solid animated series among many standouts. But it even distinguishes itself within those parameters by being partially a horror series. The show has scenes that are violent, creepy, and unnerving, while still feeling within the bounds of a Disney cartoon.

But I would not be praising it this hard if all it had was competency and one gimmick.

No, The Owl House is much more. It’s a subversive funhouse. A lot of the initial expected trappings seem in place, but the show ruthlessly attacks tropes from the second episode onward. Nothing plays out the way it should, and often the show has a sense of ever-present danger usually lacking from children’s fantasy cartoons. 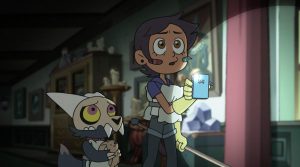 The Owl House Has Heart And Yet Some Real Bite

But what of these imperiled characters? Well, The Owl House also has one of the most delightful main casts I’ve seen in a show. Luz, our main protagonist, is utterly perfectly voiced by Sarah-Nicole Robles and is supremely charming. I have not seen such an excellent female protagonist since Kipo—and I do not make that comparison lightly.

But she’s got a lot of competition in terms of amazing characters within the show. Alex Hirsch does a turn from Bill Cipher to an adorable—and very ineffective—megalomaniac that plays perfectly alongside the other standout: Eda. Voiced by Wendie Mack, I’m not the first to notice she’s essentially a female version of Gravity Falls’ Stan Pine, but that we got such a character at all is just wonderful.

The Characters Are Just So Much Fun To Watch

The Owl House, simply, fully, is a lot of endearing fun. It’s both dark and light and great in both. Pairing nightmarish imagery and disturbing body horror with a creative and visually wonderful world, it’s a series that manages to both be a critique of high fantasy stories, and yet a loving member of the genre.

The Owl House might be just getting going, but I can see it becoming just as beloved and iconic as Avatar, Invader Zim, and Courage the Cowardly Dog.