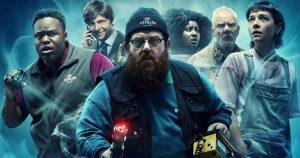 Having seen all the movies in the Blood and Ice Cream Trilogy (the three films with Nick Frost and Simon Pegg), I was stoked that a series in the same vein would be coming out on Prime. Would Truth Seekers be the fated series that does all the awesome things the movies did but with even more content?

Well, yes, but not really? The show is all you might hope it would be, but with some odd additions, confusing choices, and a serious lack of Simon Pegg. 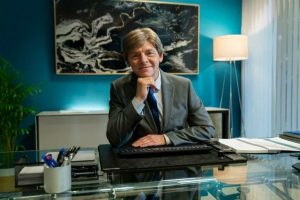 This Show Really Could Use More Simon Pegg

Here, let me step back and address what this show is before I talk about what it is not. Truth Seekers is a loving send-up of the paranormal and horror genres. Elements of mysticism and the occult come in alongside incredibly charming references to classic horror films like Psycho and The Shining. It also is very much a tongue-in-cheek take on the (bafflingly) popular “ghost hunting” genre of reality television—which thankfully I knew enough about to get the jokes.

But what about those baffling choices I mentioned? Well, the first is to not have Simon Pegg be with Nick Frost most of the time. The duo is not a duo. I don’t know the behind-the-scenes reasons for it, but it feels like such a missed opportunity. They could have recaptured the magic, instead, their interactions feel like fleeting moments of excitement. 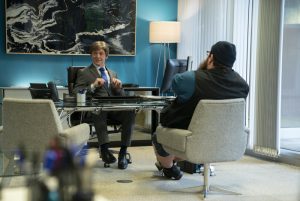 And the second thing, and this is really strange, is how often the show references white supremacists or neo-Nazis, usually for a joke. Though sometimes the jokes don’t make much sense. It doesn’t seem to have a point or a place in the plot—and mostly just comes out of nowhere. I don’t mind non-sequiturs in a comedy series, but they have to be funny.

But, that one odd aspect aside—and it is just kind of unexplained and blasé within the first 4 episodes—the show is wonderful. Nick Frost is a tremendous actor and gets to work alongside a great supporting cast. At first, I assumed Nick’s character would be only a grumpy know-it-all, but he has real pathos and is quite likable. 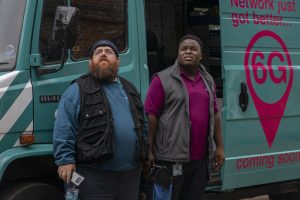 This Show Has Just Such Likeable Characters

And then we have Samson Kayo and Susan Wokoma, playing a brother-sister duo. They are just really good actors by themselves or playing off each other. Samson is kind of adorable and relatable and has a hint of mystery. But he’s outshone by Susan, who plays a neurotic agoraphobe in a way that could have been handled poorly but isn’t and you’ll root for her to overcome her barriers by the fourth episode. It’s stunning writing with that character—and it’s not obvious how good it is until hindsight.

And I have just been gushing about the characters. The plot is good and fun… if utterly insane. It’s like something out of Dirk Gently’s Holistic Detective Agency, or Buffy on crack. It’s a kitchen-sink mix of sci-fi technology, occult horror, haunted house stories, and human experimentation. It’s scary sometimes and then heartwarming out of nowhere. Plot fluctuations like these take some serious writing to not punt your audience out of immersion, but Truth Seekers does its high-wire act artfully.

Now, make no mistake, this whole thing is an acquired taste of quirky—and it’s hard to jive with all its doing at any given moment. I don’t get all its choices, and you kind of have to know your way around horror to enjoy it, but if you like the first episode, then you’ll like the next ones. It may not be directed by Edgar Wright, but it’s got some of the same horror-comedy magic as the Trilogy. 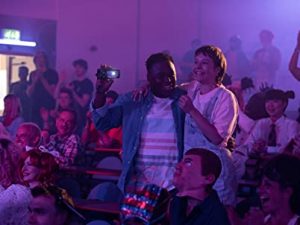