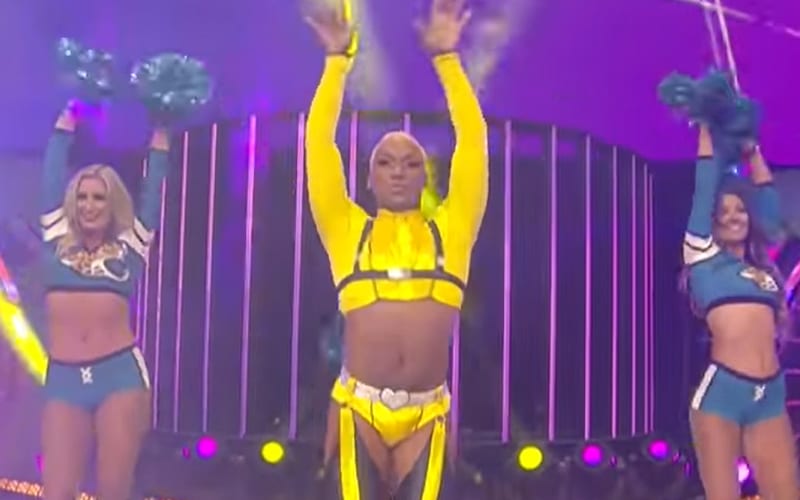 Sonny Kiss came out with the Jacksonville Jaguars’ cheerleaders at Fight For The Fallen this year, but he didn’t want to. In fact, he told Tony Khan and Cody that he wanted to be more serious, but they insisted that he come out with dancers.

While Sonny Kiss was on A Shot Of Brandi, the AEW CBO said she told Kiss to really lay it into Cody at Fight For The Fallen. She didn’t know how hard he would hit her husband. “I was feisty,” Sonny Kiss said with a smile.

“So, my match with Cody, awesome moment for me biggest match of my career, of my life — I actually didn’t want the cheerleaders this year because I wanted to focus more on the match because it was a very serious match and I felt like I had to keep my head in the game and stay focused. They were like ‘Nope!’ Tony and Cody were like ‘You have to do it, it’s the second time for Fight For The Fallen, that’s your moment, that’s you.’ I was like, yeah you’re right.”

Kiss initially said he didn’t want The Jacksonville Roar again, but he’s glad Tony Khan and Cody Rhodes talked him into it. He also choreographed their dance routine.

Sonny Kiss didn’t pull down the TNT Title from Cody Rhodes, but he isn’t done chasing titles in AEW. Now that Kiss and Joey Janela have a tag team the two will battle up the talented AEW tag team ranks for a possible shot at a pair of belts.