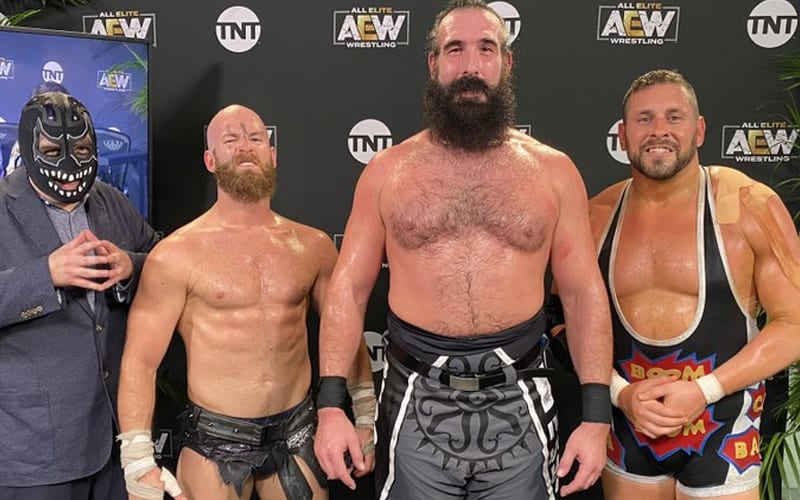 Brodie Lee’s passing left a hole in the AEW roster and the entire pro wrestling world. A great man was taken far too soon, and now the Dark Order must proceed without their Exalted One.

While speaking with Talk Is Jericho, Evil Uno discussed where the Dark Order goes from here. That union was able to help them pull through this difficult situation. They all knew Brodie Lee was sick, and things were grave. They were requested to keep it a secret and they did. Now they can openly mourn the loss and honor Brodie Lee’s legacy

“I don’t think it’s something impossible. Especially with myself and Stu since we were Dark Order since day one, we’ve been through many phases of Dark Order. We had to adjust even when storylines were changing or things not working. Lockdowns, border crossings, people getting put in the group while not knowing who they were so I think we’ve always been good at adjusting. You have to right? You have to show that you’re multifaceted.”

“This year has given us confidence in the sense of I think we can pull through this. What does Dark Order do from here? Genuinely, I wish I could tell you. I wish I knew. Today, right now, I don’t even want to think about what’s coming up. I’m mostly thinking about Jon. I think the most obvious thing is we need to stay as a group in his honor. This is kind of wild because our cult group thing was, ‘Hey, you join this group, we’ll make you better.’ But now it feels like we have to become better wrestlers, better people for Jon. We now encapsulate his legacy.”

“His name is going to be attached to us forever, and anything from now on that is bad is not a bad thing just for us but also a bad thing to his legacy. So I feel like we have to produce the best content we have. The cult thing may not be the best approach next. Maybe we’re just a family. There’s a lot of ways we can go about this, but I think everything is going to be under a magnifying glass because everything we do now has to be as good as what Jon was.”

The Dark Order gives those members the confidence to carry on. This was a very hard time for a lot of people, and the Dark Order was at the center of Brodie Lee’s Celebration of Life for a reason. We will have to see what happens next for them in AEW.