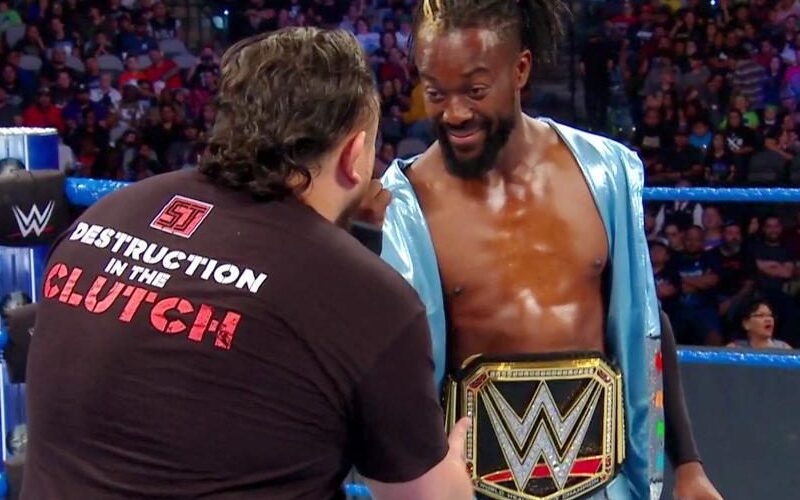 Kofi Kingston has revealed that he had to get WWE Chairman Vince McMahon’s approval to use the middle finger on an episode of SmackDown in 2019. This was during his feud with Samoa Joe prior to their match at Extreme Rules for the WWE Championship.

While speaking on their New Day: Feel The Power podcast, Big E revealed that Kofi used choice language on a whiteboard to congratulate him for winning the Money in the Bank briefcase, and he recalled the former WWE Champion flipping off Samoa Joe.

“[Kofi], throwing up the bird, when you had the WWE Title with Samoa Joe. For some reason, you flipping him the bird, I feel like you’re the most unlikely person to flip anyone the bird in WWE history.”

Kof Kingston then provided more details on the incident by revealing that he needed permission from Vince McMahon to use the middle finger gesture on Joe.

“The whole situation was so funny because we were talking about how we wanted to present this idea and we needed a punchline. I was like, ‘it’s got to be the middle finger.’ Maybe not the middle finger, but something along those lines. The more we talked about it, it was like, ‘Nah, it’s gotta be the middle finger.’ We went in and asked He Who Shall Not Be Named [Vince McMahon] and he cleared it. ‘Yeah, that’ll be fine, we’ll just shoot around it.’ What? Okay. Good luck. Sure enough, the cameraman went over the shoulder and you could see me legit cheesin’ that I get to throw the middle finger up on TV. The little things.”

Kofi Kingston was able to defeat Samoa Joe at Extreme Rules 2019 to retain his WWE Championship. He would go on to hold the title for some time before dropping it to ‘The Beast’ Brock Lesnar at the premiere of Friday Night SmackDown on FOX in October.

Thanks to Fightful for the quotes used in this article