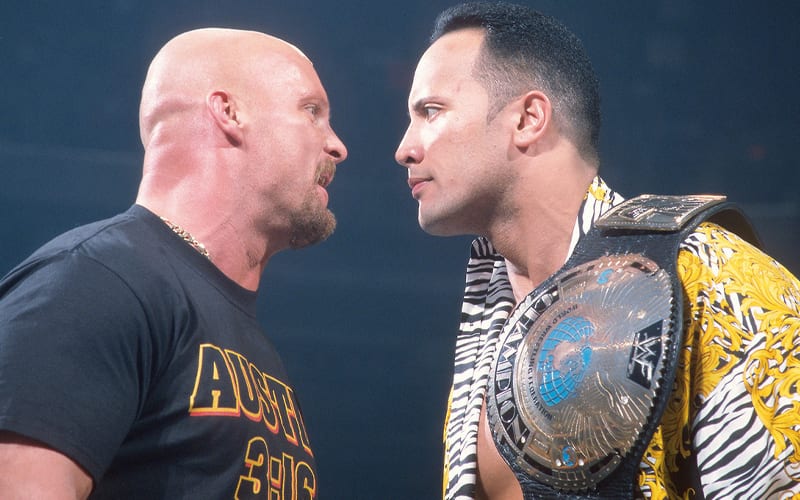 The Rock and Steve Austin had a few historic battles in the squared circle. The Rattlesnake isn’t ruling out the chances of working with The Great One on the silver screen.

Dwayne Johnson’s Hollywood career took him away from WWE. Austin has enjoyed a few roles as well, and he’s no stranger to playing a part that is given to him. The two forces have yet to unite for a film project yet, but it’s not out of the question.

While speaking to The Pat McAfee Show, Steve Austin was asked about the possibilities of joining The Rock for a future project. Austin joked that The Rock might ruin his credibility by working with him. Then he said that if Dwayne Johnson wanted to do something then Austin would be game.

“That might mess with his credibility a little bit. He’s worked long and hard, and people forget how long he’s been out there in the acting world now. He’s been out there longer acting than he was in wrestling. He’ll always be known as a wrestler and one of the top entertainers of all time, he’s the biggest movie star in the world. I think he takes his credibility very serious, and he doesn’t need me to do a buddy flick with him to stay on top being the No. 1 guy. It is what it is. I’m not looking to do that movie by the way, so that’s why.”

“But if The Rock wanted to do that movie, all he’d have to do was say, ‘Hey dude, come up with this.’ Is it gonna happen? No. But people always ask me, and that’s why. It’s the integrity of his career, and he doesn’t need to do it. I wouldn’t press it to do it anyway.”

Steve Austin admitted that it’s not likely that The Rock will ask him to work on a project. You can also never rule out anything happening in the future, especially after the unpredictable year we all just experienced.

Would you be down to see The Rock and Steve Austin share the silver screen? Give me an “OH HELL YEAH!”

Thanks to 411 Mania for the quote